Despite a Hamas boycott and low voter turnout, many saw Palestine's municipal elections as a step toward re-establishing political legitimacy. But among the young electorate, Lena Odgaard found few who believed their vote mattered, having lost faith in elections after seeing 2006's winning party, Hamas, blocked from assuming power. 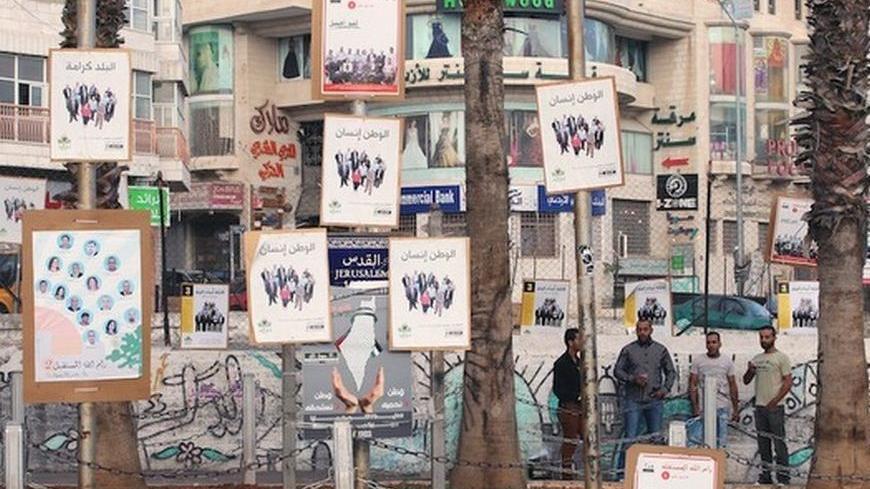 Ramallah, West Bank — Despite Hamas’ boycott of the Palestinian municipal elections and a discouraging 55% turnout, candidates and observers alike saw the Oct. 20 poll as essential to re-establish political legitimacy in the city councils after a seven-year voting hiatus. But among the young electorate, Al-Monitor found few who believed their vote mattered.

More than two years after their initial date, Saturday's municipal elections were held throughout the West Bank in voting stations often set up in local schools. Outside Aziz Shaheen School in Ramallah, the streets were already crowded at 8 a.m. as people went to cast their votes before heading to work. The mayor of Ramallah for the past seven years, Janet Michael, jovially greeted voters, election observers and fellow candidates — several from her own independent list, Al-Mustaqbal. She told Al-Monitor that the poll was essential to ensure change: “You will get new ideas with new people.”

In front of the school, her fellow candidate Iskandar Maalouf also argued for the importance of local elections in spite of political circumstances.

“Even if the occupation is all around us, we have day-to-day problems, like sewage systems and traffic, which the municipality should deal with,” said Maalouf.

But among young Palestinian voters, that optimism was hard to find. Sitting on the sidewalk in front of the school was 25-year-old Salah Abul Ein. While the ink on his forefinger was proof he had voted, he smiled resignedly when asked whether he believed the elections were important.

“My honest opinion? No — because no matter what the candidates say, the municipality cannot make Ramallah a better place because we are under occupation, and they control area B and C,” said Abul Ein, explaining that he voted only because his brother was running.

The last municipal elections were held in 2005, when Hamas clinched a landslide victory. This was repeated in the 2006 general elections and the turnout rate then reached almost 75%. When the rival Fatah party and the international community refused to recognize Hamas’ win, the two leading Palestinian parties clashed — with their supporters even taking up arms and pushing Palestine to the verge of a civil war. A Fatah-led government was established on the West Bank while Hamas unilaterally took control of the Gaza Strip in 2007. By contrast, Hamas was not represented on the ballot last Saturday. This meant that no elections were held in Gaza. Separately, Israel prevented Palestinians from holding elections in occupied Arab East Jerusalem. Many therefore refrained from voting, arguing lack of proper representation.

Also barred from voting was Saleh Al-Zaghari from the Deheishe refugee camp near Bethlehem. He explained that since the camps are administered by the United Nations Relief and Works Agency for Palestine refugees — which delivers all essential services usually provided by local councils — he was not allowed to vote in the municipal elections. But even if he could, he said, he probably would not.

“I don’t think the elections will be representative. I don’t support Hamas, but I think they should participate,” said Al-Zaghari, adding that his friends were likewise uneager to take part in the elections.

According to Dr. Samir Awad, a professor of international relations at Birzeit University, young Palestinian voters have lost faith in elections after seeing the winning party, Hamas, not being allowed to assume power in 2006. While acknowledging the implications of Hamas’ boycott, he insisted, however, that this year’s local elections were significant.

“Palestinian politics are in limbo, so there needs to be an act of revitalizing the Palestinian electorate to make them understand they have a say in what is happening in Palestine,” said Awad. He also emphasized the need for politicians to be held accountable: “Since services are paid for by the public, they need to be delivered to the public. People who pay taxes need to have their roads paved, their schools open and running, their hospitals working, etc.”

As Israel has no control over municipalities and because they play a practical role in delivering services to the people, Awad said he saw them as having more power on the ground than national institutions. As now-former Ramallah mayor Janet Michael also noted, “We can do more — especially in Area C. It is our land and we have to work there,” she said, pointing out that as Area C is under full Israeli control and that the Palestinian government has no jurisdiction there. She said that under her leadership the city’s infrastructure had improved, gardens and recreational centers had been developed and several cultural events supported.

Fatah did not gain a major win

According to the Central Elections Commission (CEC), actual elections were only carried out in 93 of the 353 municipalities on the West Bank. In 179 locations, only one list was nominated for council membership and hence won by default. Another round of elections for the remaining 82 municipalities is scheduled for Nov. 24.

Though Fatah faced hardly any competition with Hamas boycotting the election, the party of late Palestinian leader Yasser Arafat did not emerge overwhelmingly victorious. Awad said the low turnout was the combined result of voter apathy and Hamas’ supporters refraining from casting their ballot.

Final results are due to be released starting this Tuesday, but Saeed Taamallah of the CEC said Sunday’s preliminary results had not been contested. They show that lists of independents and dissidents from Fatah, who were ousted prior to the elections, won a majority in major cities such as Nablus and Jenin. In Ramallah, where there was no official Fatah list, nine of 15 seats were won by an independent list called “Town Sons.” Still, Fatah-controlled lists won a majority of council seats in Hebron, Bethlehem and Tulkarm as well as in the Ramallah suburbs of El Bireh and Beituniya.

Fatah’s inability to gain support at the municipal level is likely to add pressure to the Palestinian leadership on the West Bank, which is already experiencing plummeting popular support, according to a September 2012 poll by the Palestinian Center for Policy and Survey Research.

Just a month ago the West Bank saw a wave of protests against rising fuel and food prices and a call for Mahmoud Abbas’ Palestinian Authority (PA) to annul the Paris Protocol, which ties the Palestinian economy to that of Israel. Though the protests dwindled, the PA still faces a financial crisis and had to postpone paying its civil servants' salaries — yet again.

Palestinian presidential and parliamentary elections were supposed to be held in 2010, but were repeatedly postponed owing to the inability of Fatah and Hamas to reconcile. Awad said that the Palestinian Authority’s long-lost democratic legitimacy will seem all the more blatant now that new council representatives have been voted in by the people.

The latest date set for general elections was May 4 of this year, but they have since been postponed indefinitely. Though there has been speculation that general elections could be carried out without Hamas and Gaza, as was the case for the municipal poll, Awad said it was highly doubtful. And with no sign of reconciliation in the near future, he said that national elections are still far away.