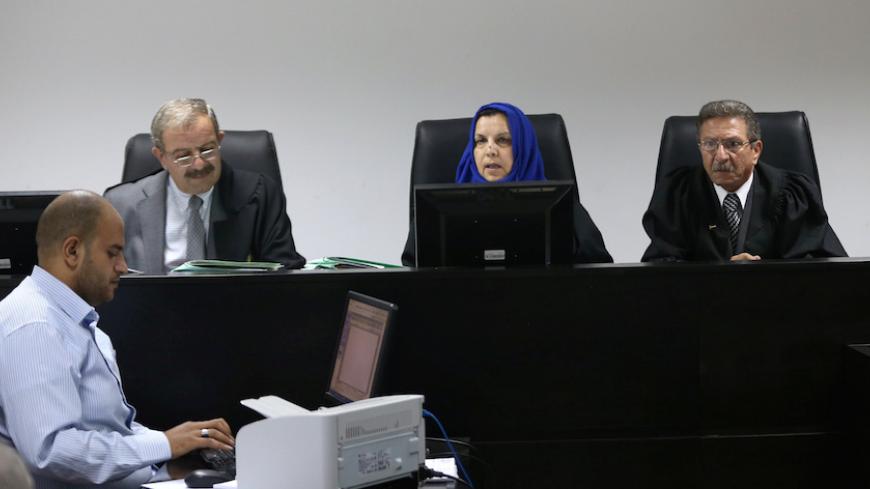 The Palestinian Supreme Court's decision to delay local council elections has resulted in an estimated $8 million debt and many questions about how those funds were spent and how they will be repaid.

Palestinian political circles were preoccupied with the local elections scheduled for Oct. 8 until the Supreme Court decided Sept. 8 to postpone the vote, in part because of disagreements over candidate lists between Fatah and Hamas. The court was expected to revisit the issue Sept. 21, but delayed any ruling until Oct. 3.

"I expect that the decision to stop the elections will stir up social problems and lead to financial legal actions," Omar Shaban, the head of PalThink for Strategic Studies in Gaza, told Al-Monitor. "Some candidates resigned from their jobs and others sold their cars to secure the financial expenses of their electoral campaign."

These expenses include amounts remitted by the candidates to their respective local councils to cover their unpaid water and electricity bills — which have been due for years — as required by Local Council Election Law of 2005 before they can run for election. The money also includes the amount the government pledged to give the Central Election Commission (CEC) in return for logistical support, including civil servants, transportation and telecommunication services, and office rental for CEC employees from the time the elections were announced in June, through Oct. 8.

That is in addition to registration fees paid by the electoral lists, as well as campaign funds collected. All of these amounts are estimated to total $8 million.

Nasr Abdul Kareem, an economics professor at Birzeit University, told Al-Monitor that Palestinian law does not govern electoral campaign expenses. "There are three types of funds paid during the local council elections. The candidates should settle what they owe to local councils and obtain a [receipt, as proof] and these amounts are nonrefundable. According to [the law], the electoral lists — 874 lists in Gaza and the West Bank — shall pay a registration fee of $1,400 for each list to the CEC, which shall keep it as a trust deposited in its account. This is in addition to the operating expenses paid by each candidate or list, including phone bills and costs for banquets, which are a prevalent electoral tradition in Palestine. These expenses are difficult to assess or to secure, which requires their regulation by virtue of a law to preserve transparency and integrity.”

CEC spokesman Fareed Taamallah told Al-Monitor, “The CEC was surprised by the decision to suspend the elections and developed a mechanism for returning the funds paid by the electoral lists. Amounts were deposited in the accounts of the CEC Banking Committee to pay back to each list [$1,400]. The amounts paid in return for the [receipts] were included in the budget of the Ministry of Local Government and may not be recovered. The government had also paid part of the election’s budget and another part was secured from an unknown source. There is no accurate estimation of the total funds.”

However, Hisham Kahil, the CEC executive director, said during a July 23 televised interview with Wattan News Agency that the Oct. 8 local elections would cost $8 million — $5.5 million in the West Bank and $2.5 million in the Gaza Strip.

A CEC official told Al-Monitor recently on condition of anonymity, “We face serious challenges to return the funds due to their owners. The [law] governing local council election states that spent funds should be returned to the candidates in case of their victory or withdrawal, but does not mention anything about the scenario of suspended elections. This was not an item on the CEC’s agenda. We were surprised by the suspension decision because dozens of candidates quit their jobs at the departments of the Palestinian Authority (PA) and the United Nations Relief and Works Agency in the Near East. These candidates not only lost their source of income but also the chance to win the election. Moreover, the cost of the election process reached $8 million, of which the government only settled 10% to the CEC, which does not exceed $800,000."

On Aug. 10, the CEC asked all candidates in the local council elections to attach statements to their candidacy applications proving they had settled all fees due to their local council. Minister of Local Government Hussein al-Araj announced Aug. 31 that the amounts paid by the candidates in return for obtaining financial receipts provided the local councils’ funds with 7 million shekels ($1.85 million).

Maher al-Tabbah, the director of public relations and media at the Chamber of Commerce in Gaza, told Al-Monitor, “The CEC did not expect a decision to suspend the elections, and probably lacks clear mechanisms or means to return the funds due to their owners. I expect the electoral lists and candidates to file legal proceedings before the courts against the CEC to recover the funds spent during the preparation of the electoral process.”

Being unprepared doesn't excuse the CEC from its financial obligations, according to Walid Mezher, the legal adviser to the Ministry of Education and Higher Education, and an independent candidate on the Nuseirat list in the central Gaza Strip supported by Hamas.

“There are financial expenses that the CEC and the government must return to the candidates, such as phone call expenses, transportation fees for the members of the electoral campaigns, and the costs of visits to families and tribes with thousands of voters, even if the CEC was not financially and administratively ready for the decision to suspend the elections," Mezher told Al-Monitor.

An important fact related to the funds invested in the local council elections was not widely reported by the media: Some lists supported by the PA exploited the PA’s public facilities, such as transportation, mobile phones and offices within the ministries to manage their electoral campaigns without any supervision by the PA.

It should also be noted that the factions affiliated with the PLO received monthly financial aid of undetermined amounts from the Palestinian National Fund. These factions, such as Fatah, have their own electoral lists. On the other hand, the lists supported by Hamas and the independent lists do not benefit from such financial aid.

“The PA benefited from international aid, especially from the European Union, to hold the local council elections, but I do not know the exact amount of this aid," PalThink's Shaban said, adding, "Some electoral lists exploited the government resources to organize their campaigns in violation of [the law]. This undermines the concepts of electoral transparency, since partisan electoral lists are not supposed to use state resources."

The court-ordered election delay also was felt outside political circles.

Haitham al-Sak, the financial director of the daily newspaper Felesteen, told Al-Monitor, “The decision to halt the elections took us by surprise because we prepared ourselves to get the financial resources from the electoral campaigns and the advertisements of the candidate lists. We prepared financial statements for the campaigns and expected to collect large amounts — tens of thousands of dollars — but the decision to stop the election was bad news for us.”