The Central Elections Commission and rights organizations have received several complaints of threats against electoral lists and candidates in the Palestinian territories, shattering the Palestinians’ hope for smooth local elections. 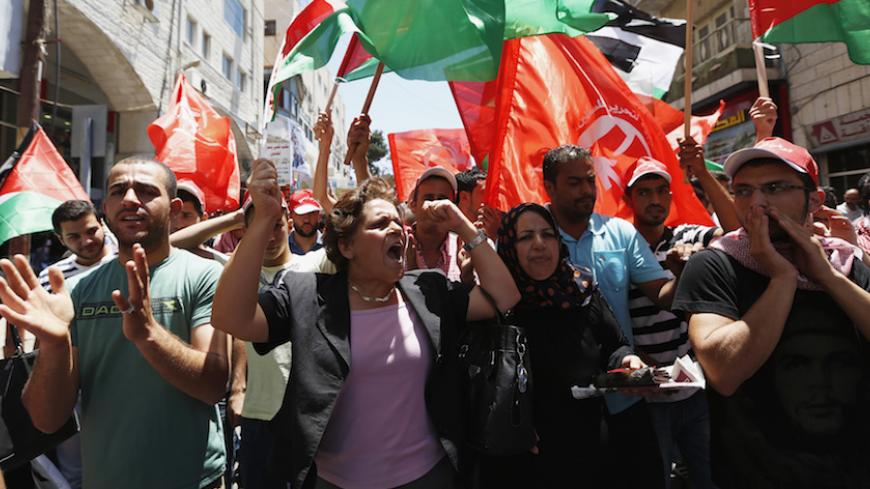 Palestinians wave Palestinian and Popular Front for the Liberation of Palestine flags during a protest against the renewal of stalled peace talks with Israel, in the West Bank city of Ramallah, July 28, 2013. - REUTERS/Mohamad Torokman

GAZA CITY, Gaza Strip — As soon as the Palestinian Central Elections Commission (CEC) announced Aug. 25 that the nomination process for the local elections had ended, several electoral lists and candidates across the West Bank started to withdraw their candidacies after having allegedly been told not to run by Palestinian security forces and anonymous parties under threat.

These threats, which included detention and deprivation of salary, were made against electoral lists opposing the Palestinian Authority and the Fatah movement, such as the Palestinian left and Hamas. The homes of some candidates such as Noureddine Khalaf, who was nominated for the Burqin town list in Jenin, came was shot at in Nablus and Jenin in the northern West Bank. Other candidates and their families were severely beaten by unknown assailants.

In the Gaza Strip, the Fatah movement accused the security forces affiliated with the Hamas government of arresting a candidate. In response to these accusations, the Gaza police said Aug. 30, “Ibrahim Abu Ali from Khan Yunis was arrested after one of his relatives submitted a complaint against him based on a family issue.”

Badran Jaber, a leader of the leftist Popular Front for the Liberation of Palestine (PFLP), told Al-Monitor, “Many candidates in the city of Hebron were subjected to harassment and threats by members of the Palestinian security forces and Fatah in a bid to discourage them from participating in the Palestinian leftist lists.”

Jaber said that some of the female candidates were threatened by their husbands, Fatah members, with divorce should they not withdraw their names from leftist lists. Other candidates received threats that their salaries from the PA would be cut. PA staff received the same warning during an electoral meeting in Gaza, and many of the threats were documented by the PFLP.

According to him, these candidates were prompted to withdraw their candidacy in the city of Hebron because the elections have taken on a purely tribal character at the cost of the national struggle.

Jaber said that those who made the decision to hold the elections at this time failed to take into account that the Palestinians are currently plagued by division and that the Palestinian left is suffering from Israeli arrests and prosecution. Add to this, he said, the PA's unjustified meddling in the course of the electoral process through the security members’ threatening of electoral lists.

He added that the PFLP filed a complaint about these violations with the Public Freedoms Committee to be referred to the CEC, and that the judiciary would be shown that the electoral process has been badly affected and the freedom of the candidates has been limited.

In this context, candidates of the independent Beitunia list in particular received threats in regard to their participation in the elections.

Salah Hamidah, a candidate and media coordinator for the list, told Al-Monitor, “Anonymous persons and Fatah members threatened Khaled Abu al-Bahaa — one of the candidates on our list — with arrest as he tried to register the list with the CEC on Aug. 25, which prompted him to withdraw his candidacy.”

He said, “Two days later — during a meeting held by some of the candidates in Beitunia — candidate Jamil Shalash received an anonymous call from someone who asked to be put on speakerphone. The caller addressed the attendees and said, 'For your safety and the safety of your family and your belongings, you should withdraw from the elections.'”

Hamidah added that candidates Ghalib al-Khatib and Mohammed Sohail received similar threats, and an unknown person contacted the husband of a candidate on the list, Nariman Sabeh, and asked him to pressure his wife into withdrawing from the election, but he refused to do so.

Meanwhile, Hamas announced in an official statement that it submitted a formal complaint to the CEC Aug. 30, including an extensive report on the overall abuses practiced by the security agencies against candidates in the electoral lists backed by Hamas in the West Bank.

Hamas said in the statement, “These violations included threats, summons, arrests, shootings, improvised explosive devices and raids of homes. Add to this that the Israeli occupation is threatening and arresting some candidates, particularly in the city of Hebron.”

Anis Abu Sabah, the head of the CEC’s Department of Political Parties and Candidates, told Al-Monitor that the CEC had received several complaints from some lists and candidates about threats. Sabah declined to reveal the number of complaints and said that more may be made until the end of the electoral process on Oct. 8.

He explained that the CEC is now examining the complaints and will discuss them with the concerned authorities in the Palestinian government and the judiciary.

Maan Dais, the head of the National Legislation and Policies Monitoring Department in the Independent Commission for Human Rights, confirmed that his organization's offices, which are scattered across the West Bank, received many complaints from candidates and electoral lists about threats.

He told Al-Monitor that the number of complaints received does not reflect the size of the problem that these threats have caused, as many people fear submitting formal complaints.

Dais explained that his organization is in touch with the CEC under a memorandum of understanding signed between the two with the aim of keeping the CEC informed about those complaints, noting that Palestinian Prime Minister Rami Hamdallah has been called on to investigate the complaints.

For its part, the Palestinian cabinet, headed by Hamdallah, stressed in an Aug. 30 statement the importance of freedom of expression and the need to protect the freedom of individuals throughout the electoral process.

The Hemaya Center for Human Rights said in an Aug. 31 statement that it is gravely concerned that a large number of candidates scattered across the West Bank have been directly threatened by Israel and other Palestinian parties to discourage them from competing.

Palestinians hope that the electoral process they have been waiting for since 2006 will take place in a smooth and democratic manner despite the violations, and wish the elections will end the internal Palestinian division.