Women were absent from the Palestinian reconciliation meetings, which shows the lack of female participation in the affairs of the Gaza Strip. 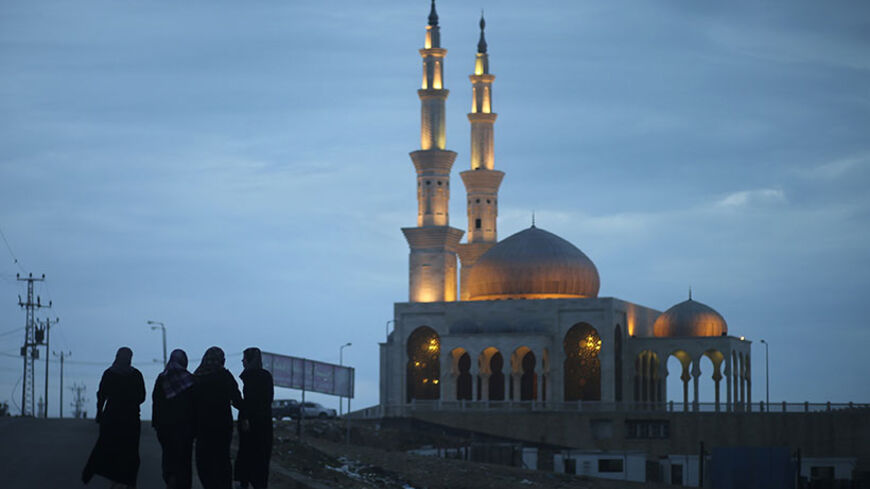 Palestinian women walk near a mosque in a street in the Gaza Strip, March 13, 2014. - REUTERS/Mohammed Salem

GAZA CITY, Gaza Strip — The reconciliation scene in Gaza City and the declaration of an agreement between Fatah and Hamas in April was devoid of women. There were no women invited, from Islamic, secular or leftist parties, to the dialogue table. It was as if such a process were the preserve of men.

Activist Yafa Abu Aker, 23, did whatever she could to enter the first session of the new dialogue, which was held on April 22 at the house of former Prime Minister Ismail Haniyeh — to no avail. The security men did not believe her when she said, “I sent a letter to the Reconciliation Commission and President Mahmoud Abbas, and they allowed me to participate in the meetings.”

Abu Aker was lost between her phone calls and her attempts to tell the security men that the head of the reconciliation dossier, Azzam al-Ahmad of Fatah, was expecting her to join them, and she failed to get through the checkpoints. But someone finally got out and accompanied her to the sessions.

Abu Aker told Al-Monitor at the time, “I noticed the lack of women or youth in the reconciliation meetings, and I wanted to represent both categories to know what's going on backstage.”

Abu Aker’s personal initiative succeeded, but what about those female names that are prominent in the field of politics and parties, why haven’t they participated?

Nadia Abu Nahla, director of the Women's Affairs Technical Committee (WATC) Gaza branch, told Al-Monitor during an interview in Gaza that it was not only today that women were absent from the reconciliation dialogue, but it has been this way since the Cairo Agreement in 2009.

“In this regard, I am being self-critical, as the largest feminist coalitions in Palestine, namely the General Union of Palestinian Women and WATC, failed to offer a feminist vision of work for reconciliation. They settled for paying tribute to the reconciliation agreement while expressing timid reservation about the nonparticipation of women.”

As for the other reason behind this lack of women's participation, Abu Nahla believes that women affiliated with political parties do not criticize the extent of representation and empowerment of women in these parties and they lack strong platforms in the media. She said, “Unfortunately, during the reconciliation [meetings], reporters were searching for the most prominent male political figures, as if women had nothing to do with the process, although they were demonstrating outside these meetings to put an end to division.”

Ahmed Youssef, a Hamas leader, believes that the issue is much simpler than that. He sums up everything that happened in one sentence, “Those who were representing Hamas and Fatah in those meetings were from high, leading positions, which are not occupied by women.” He added that what happened is the result of a political culture and the nature of Arab societies, which believe that women are less mature, aware and tolerant than men, describing this as a poor social culture.

Youssef told Al-Monitor that he was surprised about the declining political role of women, while the largest percentage of students in Palestinian universities are women: “We are unfortunately suffering from a national and Islamic belief whereby women are less able to work and give.”

Youssef admitted that there wasn’t a single woman in the Hamas political bureau, and added, “But there may be some in the near future, as they are present now at the level of consultation and organizational structure related to women, [but] not to the movement in general.”

Regarding Islamic movements, the lack of female representation in their leadership is more understandable because of their declared ideology, according to which the role of women mainly consists of raising children. But what about the progressive and leftist parties, which attended these meetings without the female members of their parties?

“In December 2012, these parties signed a memorandum of understanding to integrate women in the reconciliation negotiations, both at the level of Arab and local meetings. But these parties failed to comply with [this memorandum], although its secretaries signed the document and it was published in the newspapers,” Abu Nahla said.

Abu Nahla said this was due to the pro forma role that women play in these parties, as well as to their limited representation in the higher bodies of these parties. “Moreover, there isn’t thus far any feminist political movement, and the strength of Hamas in the political scene makes other parties, such as Fatah, more conservative,” she said.

Faisal Abu Shahla, a Fatah representative in the Palestinian Legislative Council, rejected these statements altogether and said, “Women are an integral part of our movement, and we are not ashamed of our women. They are part of the reconciliation government and the two revolutionary and national chambers, and these words aim at portraying Fatah as a reactionary movement.”

He stressed that the absence of women from the reconciliation meetings and agreement was not intended by the participants, and continued, “Even the leftist parties did not bring any woman to attend these meetings. This will be taken into consideration in the future, given the importance of women's presence with us.”

Abu Shahla pointed out that the unity government that resulted from the reconciliation includes three female ministers. He acknowledged that their number might be less than the previous government, but said it was the skills that counted, not the gender.

The Minister of Women's Affairs in the new unity government, Haifa al-Agha, agreed with Abu Shahla. Al-Monitor’s correspondent met with her at her office at the Ministry of Women's Affairs, and it happened to be the day she was taking over her functions from the former minister in the Hamas government, Jamila al-Shanti.

“Who said that the presence of women in certain places means that we are fine and vice versa? This is not a criterion to measure the participation of women,” Agha said.

“Women here have obtained their rights. There are three female ministers in the new government, as well as female general managers, attorneys and undersecretaries of ministries, and it is not fair to say that they have not obtained their rights. Yet still, we strive to further empower women,” she said. “It is not the gender that counts, but the ability to give, the skills and the efficiency.”

The minister has not formulated her plans for the ministry yet, and when she does — according to her — her view of women will be neutral. Also, none of the committees that are supposed to emerge from the reconciliation have developed a plan to empower women. These committees include the Election Committee, the PLO Committee, the Reconstruction of Gaza Committee, the Security Committee and the Government Jobs Committee. So, how are women supposed to play a role during the next stage?

Youssef believes that the solution requires more struggle and pressure on the part of feminist leaders to strongly restore their representation on the political scene. For her part, Abu Nahla believes there ought to be cooperation between the minister of women’s affairs and the feminist coalitions within the framework of a single feminist vision toward reconciliation. She urged the committees to work on having women present, since it was these committees that would determine their future.

Abu Aker is not expecting any plans or visions; she just does what she feels, and this is what the feminist arena awaits: an effective leadership, not a pro forma leadership that belongs to partisan men.