The Syrian opposition is working to empower women and increase their participation at the political level, amid low female representation in official institutions. 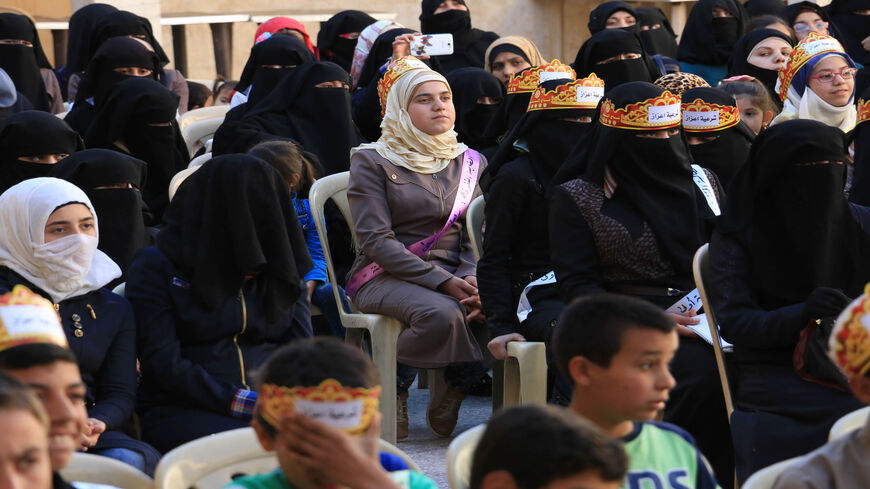 Syrian women and children attend a ceremony to celebrate the last day of the school year in the rebel-held town of Azaz, in northern Syria, May 24, 2017. - Zein al-Rifai/AFP via Getty Images

ALEPPO, Syria — The National Coalition for Syrian Revolutionary and Opposition Forces includes only eight women out of its 86 members, i.e., only 9% of its members are women. At the international level, the coalition is represented by 11 men and two women.

According to the coalition’s website, female members are independent figures. This means women in the coalition do not represent any of the political blocs that make up the coalition, including the Damascus Declaration, the Syrian local councils and the Kurdish National Council.

Hoda al-Absi was the only woman out of seven ministers in the interim government affiliated with the coalition, serving as minister of education. On April 14, she announced her resignation from the government, leaving behind an all-men government.

In a post on her Facebook page, Absi said, “The past period has been difficult for me as a minister of education as I faced many difficulties, hurdles and challenges. Unfortunately, there have been several attempts to thwart [my work] from those who were supposed to support and back me in my work.”

Meanwhile, all ministers and the prime minister of the Syrian Salvation Government affiliated with Hayat Tahrir al-Sham (HTS), which is classified as a terrorist group and controls the northwestern province of Idlib, are men.

The General Shura Council of the Syrian Salvation Government also does not include any women among its 107 members.

Syrian women still have a long way ahead to obtain their full rights, even though they participated in the revolution and war alongside men, and had their equal share of burdens and suffering.

It seems that the Syrian National Coalition (SNC) has recently sought to empower women and expand their participation and representation in opposition institutions. In order to closely examine the reality of Syrian women in the opposition-controlled areas in northwestern Syria, the coalition held on April 8 the first Syrian women's forum in the city of Azaz, north of Aleppo, at the headquarters of the opposition-affiliated Aleppo University.

A large number of Syrian women active in public affairs in the opposition-held areas in Idlib and the countryside of Aleppo participated in the forum. The participants announced the establishment of the Syrian Women’s Commission, and an agreement was reached to hold the second forum at a date to be determined later.

The participants stressed the need to boost the role of Syrian women in the political process. They also called for the immediate release of all male and female detainees, and for revealing the fate of those who have been forcibly disappeared in Syria.

According to the final communique of the forum, participants agreed on the need to guarantee women legal and constitutional rights and called for abolishing discriminatory laws against women. The forum also discussed the reality of Syrian women at the political, economic, social and educational levels, as well as the challenges and difficulties they face.

Ruba Habosh, vice president of the SNC and director of the coalition’s office for women and based in Azaz, chaired the forum’s sessions. “The forum is part of the work plan of the women's office in the coalition. It is one of the many steps we have achieved. More is yet to come,” she told Al-Monitor.

Habosh said, “Syrian women deserve to fill high positions in all fields, especially since they have proven their capabilities in the past 10 years and have a lot of experience and competence. This is especially true for the women who remained in Syria and endured the scourges and difficulties of the war.”

She pointed out that women interacted extremely well with the first women's forum, especially since the participants are women active in society and from various fields. “We talked about their perception of the role of women in the future of Syria and the inevitability of their presence in decision-making positions. We also discussed women's rights politically, legally and constitutionally,” she said.

Habosh confirmed there will be other forums with different topics in the near future. “We laid the foundation stone for the Syrian Women's Commission, whose establishment was announced at the forum.”

She added, “The women's office at the coalition plans to develop the capacity and competencies of women in Syria at all levels. Women play a key role in all areas of life — socially, economically and politically. They are the active and efficient element in the development of society. Neglecting their role will negatively affect the course of any Syrian political institution.”

Al-Monitor also spoke to Huda Serjawy, director of the Syrian Women Gathering, who lives in the northern countryside of Aleppo and participated in the forum. She said, “The forum emphasized the need for women to obtain their rights to work and equal wages, as well as the need to consolidate society’s trust in their ability to occupy political and decision-making positions. Their representation must be increased in order to reach [gender] equality. This will allow them to have a prominent role in the future Syria.”

Sundus Felfela, who also participated in the forum and works in the field of mental health, told Al-Monitor, “The coalition’s initiative to hold this forum — albeit good — came a bit late. Syrian women have the right to obtain all their rights, including political representation and participation in decision-making.”

She argued that representation of women in the political institutions of the opposition remains minimal, as women do not play an important role in the opposition decision-making centers. “We have discussed at the forum ways to advance the status of women. We hope our efforts will succeed and the coalition's supportive steps in this direction will continue until we achieve our ambitions.”

Rana Agha, an official at the Female Survivors Union, who participated in the forum, told Al-Monitor, “The forum brought together women from various Syrian provinces, some of them displaced and others former detainees in the prisons of the Assad regime. These women confirmed that they have an active role and can represent themselves and act through an all-women entity. The forum tackled the key challenges and problems of Syrian women and ways to overcome obstacles that stand in the way of empowering women, as well as ways to achieve optimal female participation in society and the political arena.”

The women who took part in the forum believe Syrian women have suffered marginalization under the rule of President Bashar al-Assad. They argued, however, that the situation of women after the revolution is not at its best. They are still excluded and their role is limited to proforma participation in small numbers in opposition political bodies and institutions.