Israeli Prime Minister Benjamin Netanyahu has ignored extreme-right incitement for many years, including a recent attack by the Hilltop Youth group against the Israel Defense Forces. 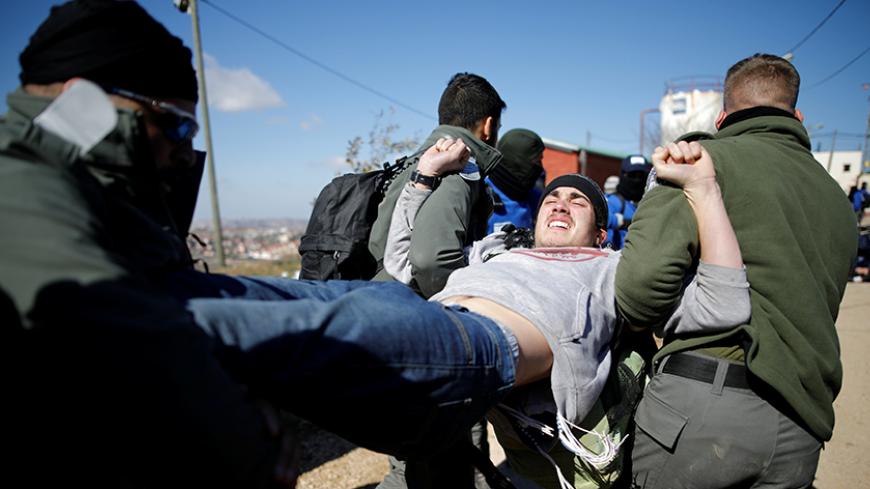 Israeli policemen remove a pro-settlement activist during the second day of an operation by Israeli forces to evict settlers from the illegal outpost of Amona, West Bank, Feb. 2, 2017. - REUTERS/Amir Cohen

Israeli media reported April 14 that settlers had attacked Israeli troops near the illegal West Bank Baladim outpost in the Benjamin Regional Council. Coverage of this serious incident included a brief video clip showing a few masked young people throwing rocks at a passing Israel Defense Forces (IDF) patrol. According to the report, the patrol was responding to reports in the area of a possible clash between settlers and local Palestinians. Since no one was hurt in the incident, it did not create major headlines. No government representatives condemned the attack or even expressed support for the soldiers.

Events like that, in which settlers attack IDF troops in the territories, have become a matter of routine. As long as they don't end in injury, they have no chance of registering on the public agenda of the media or government.

In this particular case, the assailants were young people living in the Baladim outpost. The residents of this outpost are part of the most extreme, hardcore activists of the Hilltop Youth, opposed even to IDF operations in their area.

This is not the first time these young people have attacked Israeli troops. The Shin Bet and the Israeli police are well-aware of how dangerous they are. This raises a key question: How can these settlers feel confident enough to continue attacking soldiers, when all of the relevant authorities know exactly where they can be found and exactly how violent they can be?

One of the few politicians who bothered to respond to the attack was former Defense Minister Amir Peretz, now a candidate for leader of the Labor Party. "The rioters must be brought to justice. Once again we are learning that when we take a forgiving attitude toward people who cut down trees, even soldiers in the IDF will not be immune [to their attacks]," Peretz wrote on his Twitter account. Another contender for the party's leadership, Knesset member Omer Bar-Lev, also condemned the incident, calling on Prime Minister Benjamin Netanyahu and Minister of Public Security Gilad Erdan to take immediate action against the assailants, whom he described as members of a "cult."

Netanyahu fills his Facebook and Twitter accounts with regular updates and reactions to the events of the day (including an amusing response to comments about his changing hair color). Yet he did not respond to this disturbing incident, in which Israeli citizens attacked the very soldiers protecting them.

Just four days later, on April 18, Israel faced another reminder of what is happening in its backyard. Radical right-wing activist Eliraz Fein was convicted by a Petach Tikva court of inciting violence on social networks. Fein, now 24, lives in the West Bank settlement of Otniel. According to the indictment, she has incited violence against Palestinians and IDF troops alike for a very long time.

For instance, in April 2014, while living in the settlement of Yitzhar, Fein posted statements calling for attacks on Arabs and Jews. She wrote, among other things, "I’m in favor of throwing stones (at Jews; obviously, there’s no question about Arabs) in certain situations, even if the stone leads to the death of a soldier!!! I will support the stone throwers against any outside group, even if I don't think the actions were necessary!"

During her trial, the prosecution noted that just hours after she posted that statement to a local Yitzhar Facebook group, rocks were thrown at a Yasam Special Patrol Police Unit that happened to be in the settlement. It was also learned that the same Facebook group discussed the legitimacy (according to Jewish law, in their perception) of throwing rocks at security forces, following the 2014 evacuation and demolition of homes built illegally there.

In July of that year, with the kidnapping and murder of three Israeli teens in the Etzion West Bank settlement bloc and the murder of the Palestinian teen Mohammed Abu Khdeir of Shuafat, Fein wrote, "I am proud and happy to discover that there are Jews who couldn’t stand by and be silent! I send a blessing of strength and courage to those arrested (whom I don’t know at all), who are suspected of murdering the Arab."

Following the July 2015 attack in the West Bank Palestinian village of Douma, where a settler set fire to the home of the Dawabsha family, killing the parents and their son, Fein wrote a Facebook post, saying, "[We have to] terrify them and cause them to understand that the blood of Jews is not worthless. For committing murder, the enemy will bathe in his own blood! … I see it as a correct and worthy act. It is worthy and honorable in my eyes to damage Arab property."

Fein's attorneys claim that she has since taken responsibility for her actions, and that she is a young woman who has never been involved personally in acts of violence against anyone. From the indictment, however, it is quite clear that this was not some one-time mistake, but rather the expression of a coherent worldview. Nevertheless, even reports of her conviction and a detailed account of what she wrote failed to evoke any meaningful public outcry.

The public threshold for violence by the far right has risen considerably over the past few years, largely because of the number of Price Tag incidents (hate and vandalism actions against non-Jews and non-Jewish religious buildings) that ended in murder. These include the arson-related deaths of the Dawabsha family, the kidnapping and murder of 16-year-old Israeli-Arab Mohammed Abu Khdeir and the chilling footage of the "hate wedding" in December 2014, which showed right-wing activists stabbing a photo of the infant Ali Dawabsha (who died in the fire). Given all of that, settlers throwing rocks at soldiers seems tame by comparison.

Ever since 2009, the three Netanyahu governments have contended with this phenomenon, which could easily lead to further tragic consequences. Several futile attempts were made to respond sharply to it. So, for instance, in 2013, the security Cabinet convened specifically to discuss escalating Price Tag activities, including attacks on the IDF. Then-Justice Minister Tzipi Livni and Shin Bet director Yoram Cohen even called for Price Tag activists to be declared members of a terrorist group. Apart from its public value, doing this would have made it possible to enforce stricter measures against them. But Netanyahu was reluctant to take such drastic measures. Given political pressure from the right, the steps eventually taken by the government were watered down considerably.

April 14 offered a painful reminder of how flaccid the government's response to right-wing extremists in the territories really is. Ignoring these attacks on IDF troops should be unthinkable, even if no one was hurt. By failing to respond, the government is failing to fulfill one of its primary responsibilities.