While the Israel Defense Forces and the political leadership are busy fighting the novel coronavirus, Israel's notorious hilltop youth are rioting and attacking Palestinians with impunity. 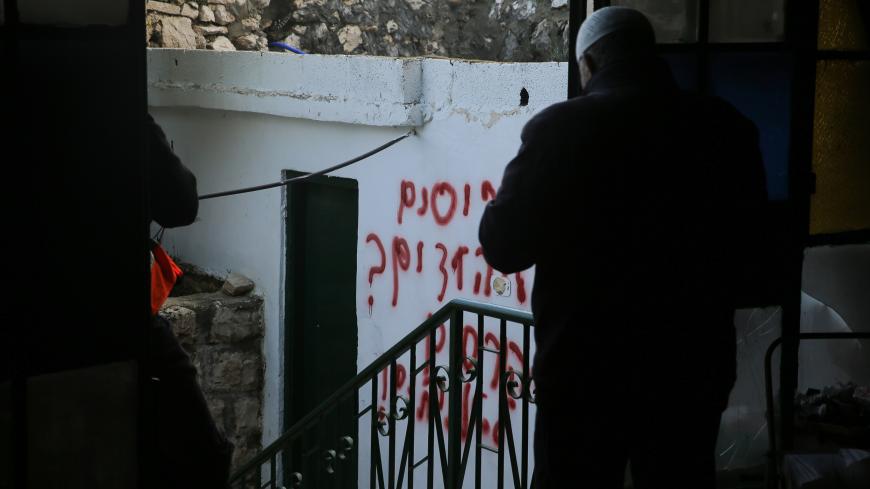 Hebrew racial slurs are seen sprayed on the wall of a mosque by Jewish settlers as eyewitnesses report that a group of settlers set fire to the Badriya mosque in Beit Safafa town, Jerusalem, Jan. 24, 2020. - Mostafa Alkharouf/Anadolu Agency via Getty Images

Israel was under lockdown during the Passover holidays. Large police and military forces manned checkpoints outside the cities and patrolled the streets to ensure that the curfew was enforced. Yet even as a modern-day plague ravages the country, it's clear who the country’s favored residents are.

On April 6, about 20 of the young extremist settlers known as the "hilltop youth" were ordered to self-isolate after coming into contact with a coronavirus patient. Some of them had even shown symptoms of the disease. They refused to be confined in a hotel in Jerusalem and then rioted on the way to a confinement facility in the south of Israel.

What would have happened if these young men were run-of-the-mill Israelis and not part of a group that has long been accustomed to preferential treatment? They would certainly have been punished in one way or another — perhaps a fine or jail time.

But when these young people rioted and resisted confinement, the government set up a tent camp for them at Metzoke Dragot in the Judean Desert, one of the most stunningly beautiful natural attractions in the country and a major draw for desert hikers. Surely many of the Israelis who did follow instructions, who kept to the curfew and stayed pent up in their apartments, would have preferred to be isolated at a major tourism destination. But even in the war against COVID-19, that kind of treatment is reserved for rowdy settler teens who break the law. And since the Israel Defense Forces is busy enforcing the curfew throughout the rest of the country and assisting the regions hardest hit by the epidemic, like Bnei Brak and Jerusalem, there were fewer troops to fulfill their routine duties in the occupied territories, leaving the hilltop youth on their own in a facility created especially for them.

The story doesn’t end there.

On April 13, two members of the hilltop youth appeared in a parking lot not far from their campsite where they encountered three Arabs: two men and a woman. The youths summoned their friends who came running, masks and all, to attack the Palestinian men with rocks and tear gas. Then they turned their wrath on the woman, kicking her in the face and stomach until she passed out and needed to be taken to Soroka Hospital in Beersheba. The assailants also set fire to two cars belonging to the Palestinians they assaulted.

The incident followed another case of violence, this one near the settlement of Yitzhar on March 26. Masked settlers threw three Molotov cocktails at a border patrol vehicle during a shift change, a vehicle carrying soldiers charged with protecting them. While no one was hurt, one can only imagine what would have happened if it had been Palestinians who had thrown the explosives. In response to the attack against IDF troops, Chief of Staff Aviv Kochavi condemned the settlers, calling what they did a “terrorist act of utmost severity.” Prime Minister Benjamin Netanyahu and Defense Minister Naftali Bennett joined him in condemning the attack.

The response to the April 6 attack against Palestinians by people in isolation because of the coronavirus was very different. While the IDF spokesperson released a statement, it came from an anonymous security source and not the chief of staff or any other commaning official. It read, “The acts of terror against border patrol officers in Yitzhar and innocent minorities in Metzoke Dragot is how the hilltop youth show their gratitude to the State of Israel for helping them during the coronavirus crisis. It is just further proof that this is a violent group of racist extremists who terrorize people no matter where they are. The security forces will bring them to justice.”

Knesset member Merav Michaeli of the Labor Party and former Knesset member Mossi Raz of Meretz spoke out openly against the incident. Raz tweeted, “If you are an Israeli in lockdown, stay at home at your own expense and lose your livelihood. If you are one of the hilltop youth, we will build you a summer camp in the desert and train you to set fire to cars, throw rocks and spray tear gas at Palestinians.”

Michaeli tweeted, “The IDF takes care of them, the state funds them, the government legitimizes them and in exchange they commit terrorism, hurt people, riot and cause harm. Don’t give me that bull about a unity government.”

A magnanimous attitude toward Jewish terrorism has been a regular motif of the Netanyahu government for the past few years. Netanyahu took a big step in advancing this position when he granted legitimacy to the far-right Otzma Yehudit party, many of whose members have broken the law on numerous occasions. Yet despite their long criminal records, much of it hate crimes, Netanyahu ensured they could theoretically serve as parliamentarians in the Knesset.

It should come as no surprise. Right-wing governments have always elevated the settlers over the rest of the country. They have always been the pioneers, and as such receive preferential treatment. Their violence is seen as a means to fulfill their vision. This preferential treatment includes the wayward teens and young adults who came to be known as the hilltop youth. They were portrayed as being driven by a deep-rooted ideology to fulfill the vision of a Greater Land of Israel. The defense minister may have condemned the act of throwing Molotov cocktails at Israeli troops outside of Yitzhar, but he in no way condemned the perpetrators. Quite the contrary. Just this January, shortly before the coronavirus wreaked havoc on the country, he attacked activists on the left and denied them access to West Bank territories to protest the occupation.

Over the years, settlers who established illegal outposts have been provided with infrastructure and encouragement, and continued to receive both even after the coronavirus began to spread. On the hill from which they threw Molotov cocktails at the IDF — Seruga Hill, which was declared a closed-off military zone — they built a yeshiva. They posted a photo of it on Facebook, along with a link to the defense minister’s page. The post bragged, “Even in the shadow of the coronavirus, we have not given up on building the country. We are now starting to build a new seminary on Kumi Uri Hill,” using their name for the site. The hilltop youth see the IDF being busy fighting the pandemic as an opportunity to intensify their own activities.

For years now, the IDF’s general staff has known that any action against settlers who violate the law is a political act. This adage has been especially true over the last few years, during Netanyahu’s last government, particularly since Bennett took over as defense minister. The April 13 attack was not the first and it certainly will not be the last. On more than one occasion, IDF troops have found themselves helpless while settlers attacked Palestinians. Their orders are to protect the settlers, their mission in the territories to ensure “the safety and security of the Jewish residents” from Palestinian troublemakers.

The most recent events are a warning to Israel. The mandate for the formation of the next government was transferred to the Knesset this morning and we will find out in the coming days whether Netanyahu and Blue and White leader Benny Gantz will form a unity government. Talks have fizzled, but the sides apparently did reach an agreement on the annexation of some West Bank land as soon as summer 2020. Once that happens, the settlers and especially the hilltop youth will finally feel like they are really in charge, the lords of the land. And the Palestinians surrounding them will be little more than a nuisance.