The Palestinians living in the villages near the Yitzhar settlement were not surprised this week at the violence perpetrated by the settlers on IDF soldiers: “If this is what they do to the soldiers, think what they do to us.” 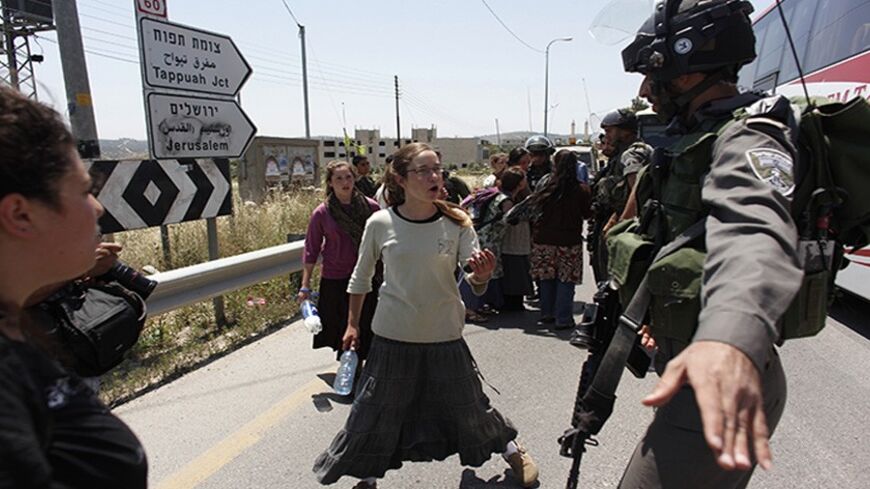 “If one of us was to throw a stone at a soldier, you would put the entire city under curfew. Soldiers would have entered the homes at night and removed the men. You would have forced us to reveal who threw the stone, even if it was a child,” says Hussam Hassan, owner of a pastry and baklava store in downtown Nablus. “But when the settlers act this way to soldiers, the soldiers are afraid of them. If that’s what they do to soldiers, think of what they do to us.”

Hassan expresses the feelings of many Palestinian residents of the Nablus district who are well-acquainted with the Yitzhar settlement. Yitzhar was established in 1983 as a Nahal [paramilitary] settlement; it was first called “Rogan,” a kind of joke at the expense of Ronald Reagan, who called for a settlement freeze just the day before it was built. Over the years, families settled the place, and after the evacuation of Joseph’s tomb in Nablus at the beginning of the second intifada in 2000, the Od Yosef Chai (Joseph Still Lives) rabbinical college was also transferred to Yitzhar. Numerous of those who call themselves the “hilltop youths” live in Yitzhar and several outposts have been established within its boundaries.

Over the years, Yitzhar has become the most extremist settlement in the West Bank, mainly because of a group that earned the nickname “A Handful of Lawbreakers.” These individuals came to Yitzhar and settled in its territory or nearby in the illegal outposts. Numerous “price-tag” actions, attributed to Yitzhar, have been perpetrated, including destruction of Palestinian property and equipment, uprooting of trees and spray-painted graffiti in nearby villages such as Asira al-Qibliya. The Yitzhar settlers did not even try to conceal their identities; in fact, they signed their names in the graffiti slogans they painted on houses in the villages of Urif and Burin.

Salah Abu Ramadan, resident of Asira al-Qibliya and active Fatah member, established a group of volunteers to guard the village at night from the settlers. Abu Ramadan says that even American Ambassador to Israel Dan Shapiro took the unusual step seven months ago of turning to Israel’s Civil Administration in the West Bank, to take action against the Yitzhar settlers who damaged the property of American aid organization USAID that built a water reservoir in the village. Salah says that the Yitzhar settlers used to come to the village every day, attack the organization’s workers, spray-paint messages and graffiti on the heavy machinery operating in the territory. They even ignited a structure built in the worksite, with a Molotov cocktail.

“We know them,” Abu Ramadan argues. “People here even know them by name. Everyone in the village knows who they are. We would tell the engineers who damaged the equipment, they would talk to the Civil Administration, and nothing would happen. Everyone is afraid of them, everyone.”

According to Maj. Gen. (Res.) Gadi Shamni, former head of the IDF’s Central Command, the Yitzhar hooligans are treated with kid gloves because “they have a strong lobby in the Knesset and the incredible back-up of the local settlement leadership, of the rabbis and of the lenient court.”

The violent events perpetrated by Yitzhar people do not usually receive media attention and do not become public knowledge, perhaps because these incidents have become routine. But this week, April 7, the attack by Yitzhar settlers on IDF soldiers, including reservists posted there to protect the residents, raised a great public storm.

When I told Khaled Paour of Nablus that the attack on the soldiers was condemned by many members of Israel’s entire political and security spectrum, he laughed. “Why is it that when they attack us, destroy cars and shoot at shepherds, no one raises hell? A year ago, three settlers struck me on my head. I was driving in my car with two friends, they stopped us in the middle of the road, took me out of the car and started to hit me on the head. Luckily, a military jeep passed and the soldiers convinced them to leave me alone. They didn’t shoot at them, they didn’t arrest them, they only asked them to leave us alone and afterward asked us what we were doing there. I said that we only drove by and they stopped us, so the soldiers started to ask questions as if we were the guilty ones. The settlers spit at us, cursed and threw stones.”

I asked if they complained. “Who, us?” wondered Paour and started to laugh at the question he felt was so illogical. The inquiry of the latest incident in Yitzhar also reveals that the reserve soldiers stood on the sidelines and did nothing. “They, the settlers, told the soldiers to stand on the side so that they wouldn’t get hurt, and the soldiers stood there, frustrated and shamefaced. They didn’t feel threatened, so they didn’t open fire,” said a reserve officer in the debriefing.

To date only eight suspects have been arrested, despite that the “frustrated and shamefaced’ soldiers reported that they were attacked by dozens of settlers. The arrest of the eight will not root out the phenomenon. “If one of us would slash the tires of an IDF jeep, they would arrest 200 people,” says Hassan, “By us, everyone was saying how, from the whole mess, only eight were arrested. But we are gratified over this ruckus, so that everyone should know what kind of hooligans you have and how they threaten everyone. Maybe now, something will be done against them.”

Meanwhile, the members of the Yitzhar secretariat sent a letter to the residents in which they strongly condemned the strike on the security forces, and even threatened to resign from their posts unless real, substantive steps were taken against the rioters. But the secretariat members did not specify who should take the appropriate measures: The IDF? Shin Bet? The police? Or perhaps the Yitzhar members themselves, those who are not connected to the violent acts of what used to be called “a handful of lawbreakers’ and have now become so many.