Settler violence against Palestinians, including reprisal attacks, has risen in the aftermath of the stabbing death of an Israeli settler. 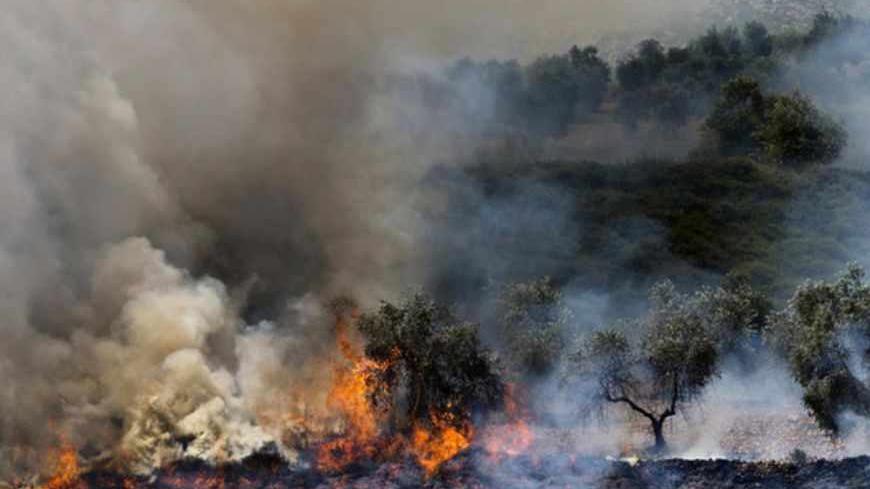 Olive trees that according to Palestinians were set ablaze by Jewish settlers after a stabbing attack burn near the West Bank Jewish settlement of Yitzhar near Nablus, April 30, 2013. - REUTERS/Nir Elias

When 24-year-old Salam Zaghal stabbed settler Evyatar Borowski to death on April 30 at the Za’tara checkpoint — the entrance to the northern West Bank and a site of settler bus stops — the reaction was swift and vehement. Jewish settlers from Yitzhar, considered one of the most extremist settlements, blocked roads and descended on nearby Palestinian villages. Palestinian schoolbuses crossing through the checkpoint were pelted with rocks, village lands and olive groves were set on fire and the city of Nablus was under lockdown for the day as the Israeli army closed off Za’tara.

Villages surrounding Nablus, among them Asira al-Qibliya, Burin, Qusra and Urif, regularly suffer attacks from settlers, but the majority of their complaints are ignored by Israeli authorities. In a February 2012 report by European Union missions in Jerusalem and Ramallah, settler violence increased threefold between 2009 and 2012, from 132 attacks to 411. That the same year, the Palestine Liberation Organization also released a report on settler violence, noting that since 2007, attacks by Jewish settlers in the West Bank have increased by 315%. Palestinian farmers, who bear the brunt of the economic losses from settler attacks on their property, are discouraged from filing complaints with Israeli authorities, which they recognize as working to the benefit of Jewish citizens. In fact, only 11 % of all cases — about 350 from 2000 to 2011 — were prosecuted, according to the Israeli rights group B’Tselem.

The independent Palestinian human rights organization Al-Haq documented at least 13 settler attacks in the West Bank one week prior to and one week following Borowski's killing, including the brutal beating of a farmer from the village of Beitin while he worked on his land. Sayil Jarab’a suffered fractures to his head and vertebrae, multiple bruises to his body, and required 50 stiches to his head.

An activist from the International Solidarity Movement (ISM) who requested anonymity witnessed firsthand the attacks after Borowski was stabbed, including the burning of 14 fields in the village of Asira al-Qibliyah.

“Settlers, mostly from Yitzhar, threw rocks at the houses in the village close to the settlement,” the activist said. “Some villagers and ISM members tried to go up to these houses [but then] the settlers set fire to lands farther away.”

Urif suffered similar attacks, with the Israeli army failing to stop the settlers, instead protecting them and aiding incitement by firing tear gas and rubber bullets at the Palestinians.

“The settlers were on top of the hill with their faces covered,” the activist told Al-Monitor. “The soldiers in front of them told the Palestinians who had gathered that they’d arrest them if they didn’t leave, but they fired tear gas and the settlers kept throwing rocks.”

The Urif Boys Secondary Shool, with approximately 250 students, has also seen its fair share of attacks by settlers this year. Nabil al-Najjar, the school’s principal, told Al-Monitor that the current school year has witnessed multiple assaults, which resulted in evacuating the school eight times.

“It’s very disruptive, of course, but we must take precautions,” he said. “As a headmaster, I can’t be responsible for endangering the lives of these students. The same morning that the settler was killed, two groups of settlers, 50 in each group, descended on the school and from a distance of half a kilometer began pelting the windows with rocks. I called the headmistress of the girls’ school, which is 10 minutes away from my school, and told her it was better to send the students home as well.”

Violent confrontations persisted throughout the day in Urif, with Najjar observing the Israeli army in some instances enabling the settlers to carry out attacks or firing tear gas at Palestinian farmers either tending or attempting to protect their lands.

Najjar said that a number of students accused of throwing stones had been arrested at their homes by the army during the school year, but were usually released after a few days or weeks. Settler violence, he remarked, is something that the village has grown to expect, and he believes that in light of the Palestinian Authority’s ineptitude at protecting Palestinians, international media awareness is hugely vital.

“Just last week, three young settler women were throwing stones at Palestinian cars near Za’tara checkpoint,” he added. “This is part of the systematic violence against Palestinians which the Israeli army gladly takes part in, which also explains why the settlers get away with their crimes.”

Wael Faqeeh, a popular resistance activist, explained how the settler attacks have grown varied in nature, from throwing rocks at Palestinian vehicles and attacking houses in villages to physically assaulting Palestinians and setting fire to or spraying racist graffiti on mosques and churches.

“We leave the statistics to the human rights organization,” he said, “whereas we activists are more concerned with taking action to strengthen the resolve of the communities and individuals affected. Seven hundred trees were uprooted in the village in Aqraba by the Israeli army [on May 16], and so on Sunday, June 2, we are heading to the village to replant the trees.”

Although effective, activist groups like Refusing to Die in Silence, which was formed in September 2011 in response to escalating settler violence during the olive-harvesting season, tend, unfortunately, to be short lived.

“These groups are mostly youth based and also document settler violence, but they find themselves running out of steam primarily because there isn’t enough support from the Palestinian Authority,” Faqeeh observed.