In an effort to push Abu Jamal's family from their land in the West Bank, the family has faced continual attacks from Israeli settlers for more than a decade, Linah Alsaafin writes. 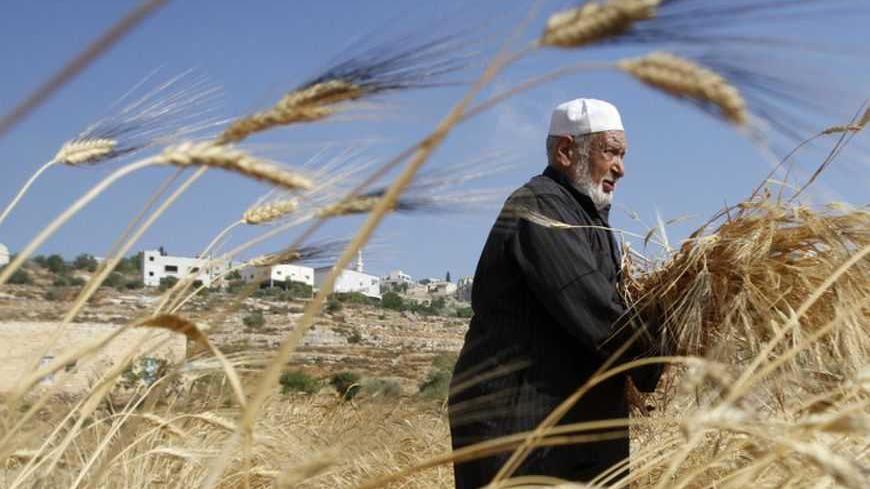 Khaled Daraghmeh always insists that the youth and visitors who volunteer to work on his property every week fill their bags with the herbs and fruit grown on his land.

“The almonds at this time of year are very good,” Khaled says, also known as Abu Jamal. He calls his son Mo’men to show the guests the best almond tree. “The lemon trees are never bare — see the yellow lemons? In the summer, they change color to green but in both cases they are still delicious.”

Abu Jamal is from the village Deir il-Lubban that lies just off the main road between Ramallah and Nablus. His family has owned an ancient stone building, referred to as the khan, for many generations. The family also owns the land that the khan resides on, more than 22 square kilometers (8.5 square miles) of it.

It is this land, and the khan itself, which have proved to be the thorn stuck in the throats of Jewish settlers. Lubban al-Sharqiyyeh is surrounded by six illegal settlements, and Abu Jamal’s parcel of land lies between one settlement established on the village’s land called Ma’ale Labuneh, preventing it from being linked to the other settlements such as Eli and Shilo, which extend from the Jordan Valley to the Green Line.

This particular cluster of settlements, explained by Stop the Wall’s coordinator Jamal Jum’a, was built for expansion in order to create a horizontal “wall” of settlements in the West Bank.

“They want to sever the north and middle West Bank by forming a conglomerate of settlements, like a block,” Jum’a said. “And so in this way, there will be only one access route from Ramallah to the north, and that is through the Za’tara checkpoint.”

A 2012 report by the Palestine Center, titled "When Settlers Attack" documented that between the years 2007 to 2011, settler attacks on Palestinians and their lands increased by 315%. Palestinian Authority Prime Minister Salam Fayyad said in 2012 that number escalated by 150%, mostly carried out under the settler-dubbed slogan of "price tag," which includes vandalizing mosques, churches, villages, olive groves, and houses. Last year also marked a 4.7% increase in settler population in the West Bank, excluding East Jerusalem. All settlements are classified as illegal under international law, yet under Benjamin Netanyahu's tenure, settlement growth rose rapidly, now numbering over 200, which have redefined the landscape of the West Bank and effectively killed off the possibility of a two-state solution.

The settlers from Ma’ale Lubuneh first attacked Abu Jamal's khan in 2003, yet it wasn’t before 2007 that they managed to temporarily occupy the building for three months, which prompted Abu Jamal to appeal to the Palestinian Authority. When that proved to be futile, Abu Jamal moved his family from their home in the village to the khan, where he hoped that Palestinian presence would be enough to deter the settlers from coming.

For a brief while, that worked. Abu Jamal hoped that presenting the Israeli civil administration court with papers and documents that show his ownership over the land would stop the settlers from coming to the land.

Instead, Israeli intelligence officers arrived at Abu Jamal’s front door and repeatedly attempted to bribe him with huge monetary incentives to leave the land. When Abu Jamal refused all offers, the settler attacks restarted.

In May 2012, the Israeli soldiers that arrived, after a group of heckling settlers made their way onto the land, arrested Abu Jamal with his oldest son, Jamal, who was pepper-sprayed in the face. They were both beaten up before being taken away. Abu Jamal was fined 20,000 shekels (more than $6,000), and spent three months in jail under the charge of attacking settlers. During that time, the settlers smashed all the windows of the khan, broke down the front door, destroyed a section of one of the walls, and poisoned the irrigation system that feeds his crops.

The International Solidarity Movement (ISM) filmed Abu Jamal’s arrest and tasked themselves with maintaining an international presence with the family, to document the crimes of the settlers as well as to protect the family.

A few months later, in August, settlers once again surrounded the khan and began throwing rocks at the new windows fitted by Abu Jamal, who was outside working on his land. Abu Jamal’s wife ran to the bedroom with her two youngest sons, Mo’men and Noor, and panicked as the settlers shattered the windows. The mob of jeering settlers, shouting racist chants, dragged the two boys and their mother outside and beat them up severely. Abu Jamal was also beaten and detained briefly. His sons and wife required hospitalization after the attack.

In addition to enduring the vicious attacks by settlers, the Daraghmeh’s financial situation worsened. Abu Jamal works as a farmer and is dependent on the produce on his land for his livelihood. He could no longer afford to repair the damage inflicted by the settlers on his land and khan.

As Abu Jamal told the ISM, “[The settlers] feel that I am weak now, as I do not have the money to continue replacing everything they destroy. So they came every day, watching me die slowly with no one to help.”

Abu Jamal tried to appeal to the village council for help, but lost his temper and ended up being jailed for a few days by the Palestinian Authority.

“I told them that my dog was more loyal and offered me more protection than them,” he recounts, shrugging his shoulders. “But what made me especially angry was that the council members have lands stolen from them for the construction of the Ma’ale Labuneh settlement and are not engaging in ways to fight for it back. They won’t defend their lands.”

Since the late summer, different groups of youth volunteers spend their Saturdays or Sundays at Abu Jamal’s land, planting seed, cultivating crops, and generally helping out. Someone from Jordan recently donated a cow to Abu Jamal, and the settlers in a typical fashion, poisoned it and the family’s dog. Luckily, a vet was able to save the two animals just in time.

Abu Jamal now has a lawyer working on his case: Jihad Abu Raya, from the 1948 Palestinian town of Sakhnin, visits him a couple of times every month to update him on the situation.

“There are actually two cases we’re working on,” Abu Raya told Al-Monitor. “One is to fight off the claims that Abu Jamal’s land is a ‘historical Jewish one,’ thus stopping Israeli authorities from transforming the land into a Jewish-only resort. The settlers filed the second case against the Daraghmeh family, who want them to remove the windows, door, and fence around the pool since these are recent additions.”

The pool, now an empty concrete basin, is believed by the settlers to be where Moses bathed himself. The settlers believe that by bathing in the pool naked, they will be absolved of all their sins.

“As long as there’s a court case — and this one will last for months and months — everything will be frozen for now,” Abu Raya said. “Of course, there’s no stopping the settlers in carrying out their hate crimes, but their attacks have significantly decreased from before.”