In an interview with Al-Monitor, veteran settler Benny Katzover says there's a link between the settlers' youth violence against IDF soldiers and the forced evacuation of illegal outposts, and Katzover does not worry about the boycott of products. 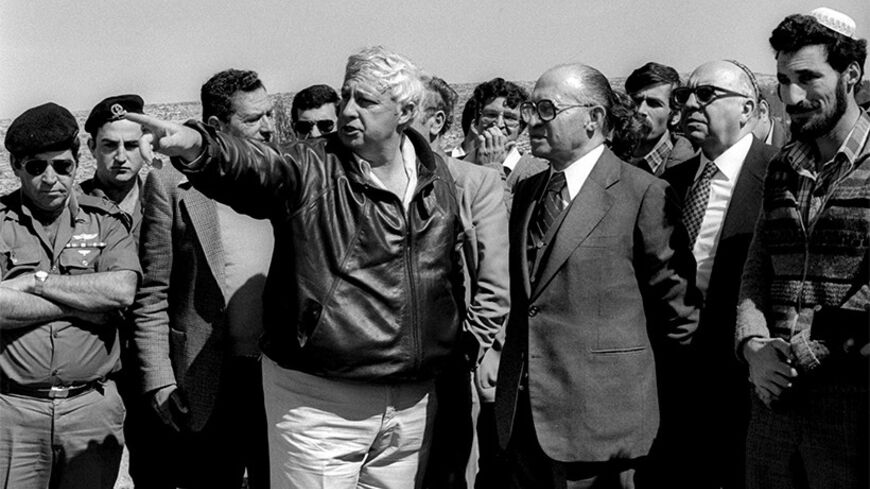 Standing on the summit of Mount Kabir in Samaria on Monday, April 7, 792 meters (a half-mile) above sea level, we could make out the mountains of Gilboa through the thick mist. The Jewish settlement Elon Moreh lies on the slopes of Mount Kabir, next to the city of Nablus. The settlement’s distinctive red roofs fill the nearby landscape like some pastoral village scene. It's one of the oldest symbols of the entire settlement enterprise.

We climbed the mountain at noon, together with Benny Katzover, chairman of the Samaria Settlers’ Committee and a founder of Elon Moreh. Among the general public, Katzover is one of the people most identified with the Gush Emunim settlement movement, which could be called the DNA of the settlement enterprise. He arrived in Hebron when he was 21, and a short time after that he got married. His wedding was the first Jewish wedding to take place in Hebron since the riots of 1929. He later became a leader of the settlement umbrella organization Yesha Council, the political front for the settlements, and served as head of the Samaria Regional Council.

The sense of security that has been characteristic of Judea and Samaria for the past few years was recently disturbed by incidents of severe violence, perpetrated by the residents of the Yitzhar settlement against Israel Defense Forces soldiers. It began with the stoning of a vehicle belonging to an officer, who works for the Israeli Civil Administration. This was followed with the puncturing of the tires of a jeep belonging to the brigade commander of the sector, and evolved into a most serious incident, when the post manned by reservists protecting the settlement was attacked. The cause of all this was the demolition of illegally constructed buildings in Yitzhar. It crossed a red line, a disorderly and very troubling rampage, more like the kind of behavior expected in the Wild West. This violence posed a real challenge to the traditional balances in place between the army and the settlers.

Katzover was unequivocal when asked how he felt about the violent outburst in the settlement of Yitzhar and the assault on soldiers and officers: “Anyone who harms the brigade commander harms us as well. I consider the whole thing to be disgraceful. Yitzhar has a long history of rebellious behavior, though they have managed to get rid of some of the problematic figures there. Still, based on the laws of this country, it is impossible to expel all of them. Obviously, I disapprove of what happened. It’s not how we educate here, and it’s not characteristic of the settlements in Judea and Samaria. They are causing a lot of damage to us, ” he said. 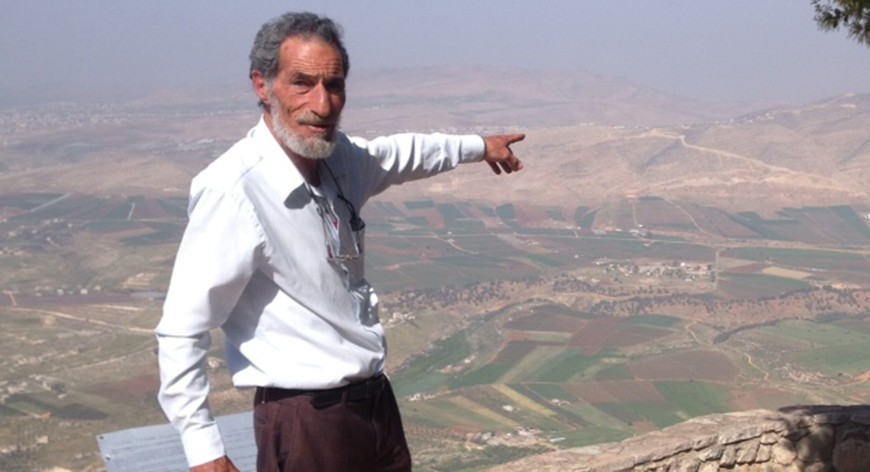 Benny Katzover, head of the Samaria Settlers Committee, at the Mount Kabir lookout in Samaria, April 7, 2014. (photo by: Mazal Mualem)

In an interview with Al-Monitor, in reply to the question, "And you, the old leadership, are giving up?" Katzover said: "Not at all. We’ve been conducting educational activities for the past two years, and they are already starting to bear fruit. On the other hand, you have to look at the whole picture. After all, a young guy like that lives in Yitzhar. He sees what happened to a family’s home, and all the property damage, worth hundreds of thousands of shekels. In contrast, he also sees that nothing is being done about illegal construction among the Arabs. It really has a bothersome impact on that young man's judgment."

Katzover, 67 years old, has tied his whole life to Samaria. On Passover 1968, he joined a group that celebrated the traditional seder meal at the Park Hotel in Hebron and immediately stood out as a local leader. At the time, the country was still in a state of euphoria after the Six-Day War, and the very fact that a seder was being celebrated in Hebron was much more than just some symbolic act. Over time, this event would come to be considered as a formative one in the history of the settlement. The seeds sown there would grow over the years into what would become the enormous settlement enterprise, which lies at the center of the Palestinian-Israeli conflict, the solution to which seems to be slipping further and further away.

The interview with Katzover took place against what seems like the breakdown of yet another round of negotiations between Israel and the Palestinians. Katzover is somewhat worried about Prime Minister Benjamin Netanyahu, but he is also encouraged by the demographic growth of the Jewish population in Judea and Samaria. He believes that as long as it continues, it will protect them from any future evacuation.

Al-Monitor: You’re a veteran of countless public and political battles. Aren’t you bothered by the phenomenon of Israel’s delegitimization because of the settlements? The Israeli public is also starting to get fed up with it.

Katzover: I don’t feel that the public is fed up. I’m a pretty well-known person, and I spend time among the general public. I can sense that the overall attitude and appreciation toward me has only grown. Maybe on a day like this, when a brigade commander has his tires punctured, more people will make a face, but as soon as the impression left by that incident passes, support for us only grows stronger.

International pressure has certainly intensified, mainly because the international community notices that Israel folds under pressure. They saw the same thing happen after Oslo and the disengagement from Gaza. On the other hand, the boycott hasn’t actually succeeded in harming us. It is barely felt at all.

Katzover: It is only marginal. There may have been two factories that shut down out of several hundred. We’re not folding up shop. Look, the winery in Rechelim announced of its own accord that it won’t be marketing to Europe, because it has enough other markets. It seems to me as if the whole issue of the boycotts is an Israeli hobby. [Israeli chief negotiator] Tzipi Livni is a good example of that. Her very words encourage the boycotts. Her father would have been ashamed of her. He fought with us, shoulder to shoulder, to establish the settlements in Judea and Samaria. Suddenly to see his daughter fighting shoulder to shoulder with [Palestinian President] Mahmoud Abbas over the Palestinian state dream, is very disturbing.

Al-Monitor: Since it will soon be Passover, it would be impossible not to mention the seder eve you celebrated in Hebron after the Six Day War. How would you look back at [yourself], the young Benny, almost half a century later?

Katzover: I was fortunate to get swept up in an unparalleled historic event at just the right moment. If we would have missed the opportunity and the cracks that opened up at the time, a huge part of the enterprise that we built up then would have never gotten built at all. Enormous strength of character at just the right moment created an intense feeling that it is possible and even desirable to change things. The main criticism that I still have is why we didn’t do more, because every centimeter and every gram that we invested gave a return in tons later on. In hindsight, I would tell Benny back then to do more. Don’t rest. Don’t go to sleep. Every gram that you invest now is what will be there for you later on.

What we have now is a remarkable success. I still remember how they laughed at us. “How will you bring a thousand people to Samaria?” Until 1973, there was a total of 1,000 residents in four settlements. And here today there are 400,000 of us.

Al-Monitor: Things are going well for you now. In terms of security, things are quiet, the negotiations are about to break down, there’s a right-wing government in power …

Katzover: When I check the facts, I see that yes, all of that is true. When I see that the growth rate in Judea and Samaria is the highest in the country, I see evidence of our vitality. On the other hand, government interference and restrictions are very extensive. There was no similar period to that of the construction freeze. It hurt us. However, the bottom line is that the growth tendency continues and no one can stop that, despite all the decrees and construction freezes.

Al-Monitor: There’s a feeling that you chose a strategy of natural growth so that you would keep increasing until the moment of truth.

Katzover: That’s right, because whatever we will not accomplish today, we will lose. The Arabs are seizing control of territory. They’ve already seized control of 1.5 million dunams [about 370,000 acres], and they continue to take over [land] with European funding. On the diplomatic level, we could find ourselves caught in a situation in which the whole world conducts a cost-benefit analysis. Is it possible to take this enterprise apart or not? That is why every nook and cranny can be critical. As far as natural growth is concerned, we must reach the point of no return. The urgency stems from the fact that we may not be able to do tomorrow what we can do today, and what we do today could possibly rescue the entire enterprise.

Al-Monitor: Can you imagine a scenario where you have to gather in settlement blocs as part of an agreement?

Katzover: Gathering us into settlement blocs is a hideous form of expulsion disguised by a very pleasant name. But it is still expulsion.

Katzover: Ariel Sharon, even considering his enormous contribution to the settlement enterprise. Rabin made a most grave diplomatic move. He led us to all that is happening today in terms of terror, when he showed the world that the Jews are really willing to fold and give up. But Rabin had principles, and he never violated them. That is why he never interfered with how we run our day-to-day affairs, our education system and our natural rate of growth.

In contrast, Sharon was a brutal man. He had no red lines. When he decided on something, mainly because of personal interests, nothing could stand in his way. Sharon, a person identified with the right, set a huge precedent for closing up shop on the entire Zionist enterprise.

Al-Monitor: This Passover, do you feel safe when you look at Netanyahu? Aren’t you worried that the blow will come from him?

Katzover: I see a person whose moral values have been worn away over the years in favor of his political aspects. It seems to me as if all those years in government have worn him down. He has become a merchant, who can reach distant shores from his point of origin. That is why I'm not tranquil with him. I would even go so far as to say that I'm worried. Today, I’m not sure that his opinions are that different from Tzipi Livni’s. On the other hand, he doesn’t have the propensity for evil or the wickedness that Sharon had.