Incitement against Rivlin based in his own Likud Party

Despite his indisputable credentials on the Israeli right, President Reuven Rivlin now finds himself the target of an incitement campaign from within his own Likud Party following statements against Jewish terrorism and efforts to build bridges between Israel’s Jewish and Arab societies. 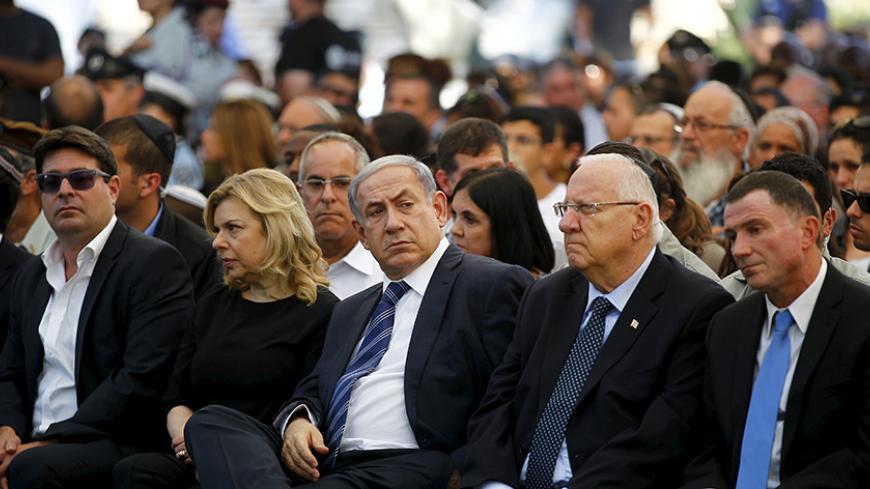 In February 2015, at the height of the most recent election campaign, the Likud leadership expelled Eli Moyal, former mayor of the southern development town of Sderot, from the party. This unusual move against the veteran Likud member, ordered by associates of Prime Minister Benjamin Netanyahu, followed reports that Moyal had met with Zionist Camp co-chairs Isaac Herzog and Tzipi Livni. That Moyal had been giving a lot of interviews at the time attacking Netanyahu for his performance during the 2014 Gaza war was also a factor. The ensuing media storm embarrassed Netanyahu and the Likud, and Moyal was reinstated. This seemingly trivial story, which has virtually been forgotten, along with another story from recent days prove the extent to which the Likud, Israel’s mainstream right-wing party, has cut itself off from its basic liberal values and the extent to which the senses of its leaders have been dulled.

The week of Aug. 3 was a stormy one, with terror attacks carried out by Palestinians and Jews. In the ensuing flood of hateful words, President Reuven Rivlin, flesh and blood of the Likud movement, became a central target of incitement. The trigger was his emotional, empathetic and heartfelt reaction to the burning death of a Palestinian toddler in the village of Douma in an attack allegedly committed by members of the extreme right.

“There are those among my people who chose the path of terrorism and lost their humanity,” Rivlin wrote in Arabic on his Facebook page. Social media erupted in a tidal wave of reactions, accusing Rivlin of “hating his people” and calling him a “terrorist,” an “Arab” and “president of the Islamic State.” Rivlin was also photoshopped wearing a kaffiyeh and a Nazi uniform.

What initially appeared to be an expected and easily containable response from a handful of extremists turned out to be much broader, permeating the ranks of the Likud. Shimi Tal — chairman of the party’s branch in the town of Be’er Yaakov, a veteran and a familiar figure in party circles and its institutions with access to ministers, Knesset members and the prime minister himself — wrote on his Facebook page, “I think the president should be arrested for the serious things he said, which damage the security of the state and the citizens of Israel. … The president has crossed red lines, only a mentally ill person would address world media and say ‘my people chose the path of terror.’ He should be committed, urgently.”

Even when his comments went public in the mainstream media, generating a small storm, Tal declined to recant his statements, asserting instead, “It’s permissible to express criticism.” The Likud issued a statement dissociating itself from Tal’s comments, but no one thought to send him a reasoned letter expelling him from the party.

A central activist in the ranks of the ruling party publicly incites against the president, and not a single senior Likud official clearly and loudly dissociates himself from that person on his or her own volition? It would appear that for the party leadership, Moyal's meeting with Herzog and Livni was far more serious than incitement against the president.

Rivlin, as noted, is the flesh and blood of the Likud movement. He was raised on the values of the Zionist Betar movement, traditionally linked to the original Herut and its successor, the Likud. Rivlin is a strong proponent of Greater Israel, with roots planted deep in the ideological right. That Rivlin is also a liberal, a democrat guided by the humanistic values on which he was raised, appears to have made him an enemy of the people.

In 1994 and 1995, during the stormy days of the Oslo Accord when incitement against Prime Minister Yitzhak Rabin reached fever pitch, the sentiment had not originated in his own left-wing camp. Rather, it grew from fertile, right-wing ideological soil. In Rivlin’s case, he did not divide the Land of Israel and did not push for an agreement with the Palestinians like Rabin did. He merely conducted himself according to the values that have always typified the political camp in which he grew up.

That is why Shimon Sheves, director of the prime minister’s office in Rabin’s days, was right when he said in an interview with Shlomi Eldar that the incitement against Rivlin has overtaken that which led to Rabin’s murder in 1995. In fact, since he was elected president last year, the agenda Rivlin has adopted of building bridges between Israel’s Jewish and Arab societies has made him a target of right-wing incitement.

Rivlin chose to take part in the commemorative events for the 1956 Kafr Qasim massacre of Arabs by Israeli soldiers, offered best wishes to an Arab-Jewish couple on their wedding day, canceled a performance at the presidential residence by the singer Amir Benayoun after he sang a racist song, “Ahmed Loves Israel,” and spoke out against amendments to Israel’s Nationality Law that would enshrine Israel's status as the nation-state of the Jewish people. All of the above were sufficient to turn Rivlin into a radical leftist, although he has not crossed political lines.

The president was, and remains, a member of the right-wing camp and has not abandoned the spirit of Revisionist movement founder Ze'ev Jabotinsky that had guided Menachem Begin, the emblematic Likud founder and prime minister, in his conduct — that is, being a democrat and liberal, all the while believing in Greater Israel. The left has always claimed that the two cannot go hand in hand, but some central Likud figures — among them Begin and his son and minister without portfolio Benny Begin, former Ministers Dan Meridor, Michael Eitan and Limor Livnat as well as Rivlin himself — have proven that it is indeed possible.

When, however, Minister of National Security and Tourism Yariv Levin, for example, says openly that the High Court of Justice threatens Israel's existence, one is witnessing a different Likud. Suffice it to examine the events in the Beit El settlement during the last week in July. The Supreme Court had ordered the demolition of two structures built without approval in the Dreinoff neighborhood, and Defense Minister Moshe Ya'alon was intent on carrying out the order. The violent reaction against him erupted at once, including on social media. He was accused of being a leftist, and government colleagues, among them Minister of Strategic Affairs and Jerusalem Affairs Ze’ev Elkin (Likud) and Minister of Education Naftali Bennett (HaBayit HaYehudi), were particularly heated in their accusations. Ya’alon, who holds right-wing views and is considered a hawk, had suddenly become a dangerous leftie.

Much has been written, including in Al-Monitor, about the radicalization of the Likud, about senior party figures being held hostage by the extreme right and the settlers, whose votes they need to be elected. This is the result: The Likud has 30 members in the Knesset and not a single one stood up to nip the incitement against Rivlin in the bud.

As Knesset speaker from 2003 to 2006, Rivlin was among the opponents of Ariel Sharon’s Gaza disengagement plan. At the annual national torch lighting ceremony on Mount Herzl in April 2004, Rivlin had identified with the Jewish settlers who would be evicted from their homes under the plan, stating, “I am proud to light this torch, on the State of Israel’s 56th Independence Day, in honor of the Knesset, the state’s legislature, the home of its democracy, and in honor of the pioneers who led the way, from [the northern kibbutz] Hanita to [the Gaza settlement] Kfar Darom, from [the northern kibbutz] Negba to [the West Bank settlement] Kiryat Arba.”

In the many interviews Rivlin has given following the wave of incitement against him, the president sounded hurt and offended to the point of tears, especially when he spoke of how his friends on the right had not stood up to defend him and had accused him of treason. In doing so, Rivlin pinpointed the real problem: Incitement no longer is the purview of a handful of extremists.