With Prime Minister Benjamin Netanyahu up again in the polls, Zionist Camp leader Isaac Herzog needs to present to the public a coherent and clear political program in order to defeat him. 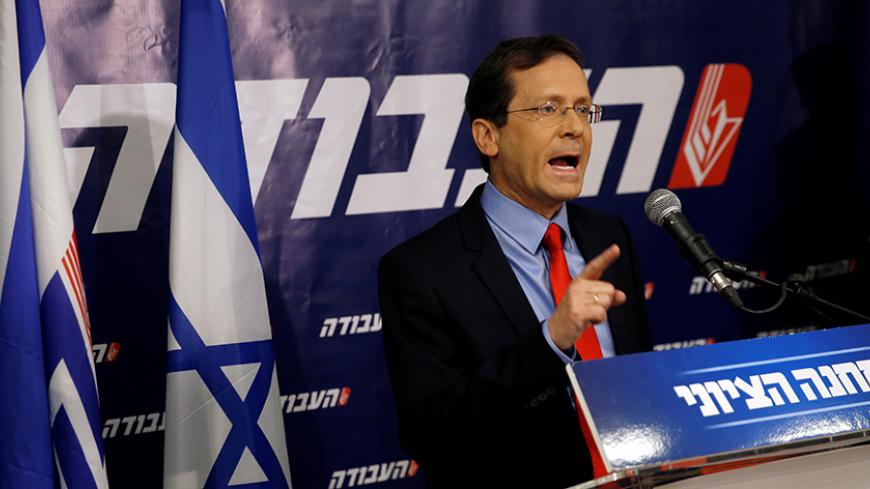 Isaac Herzog, the leader of the Zionist Camp, delivers a statement at the party headquarters in Tel Aviv, Israel, May 18, 2016. - REUTERS/Baz Ratner

In the shadow of Prime Minister Benjamin Netanyahu’s campaign to destroy public broadcasting, his Likud Party received 26 mandates in a poll published Nov. 4 on the Israeli Public Radio (Kol Israel). Thus, the Likud returned to the top position as the largest party in the polls, after it trailed behind Yair Lapid’s Yesh Atid in September. Without discounting the rise of Lapid, who for months now has enjoyed polls that predict 20 or more mandates for him (if elections were held today), we should linger on Netanyahu’s accomplishment here.

In contrast to the fluctuation of other parties in the polls since the election — the fall of the Zionist Camp and Kulanu Party and the rise of Yesh Atid, Yisrael Beitenu and HaBayit HaYehudi — Netanyahu and the Likud have succeeded in maintaining a solid base of supporters. It would not be unfounded to assume that when Netanyahu watched reports about the successful rally the Zionist Camp organized Nov. 6 to mark 21 years to former Prime Minister Yitzhak Rabin’s assassination, he wasn’t too concerned. According to the organizers, about 70,000 people participated in the rally in Tel Aviv. Even if this estimate is a bit inflated, there is no doubt it was a successful political rally for the center-left camp.

For the leader of the Zionist Camp and the main speaker at the rally, Isaac Herzog, it was a moment of satisfaction after difficult months of efforts at survival within his party and crashing — of himself and the party — in the polls. The speech in front of a warm and supportive audience and the headlines it made in the media, according to which he decided to finally end talks regarding his possibly joining Netanyahu’s government, did him good. The question is where Herzog could go from here. Does he have an action plan to unify the center-left and to lead it?

Judging by the speech he gave at the square on Saturday night, Herzog still hasn’t formed such a plan. “Tonight we are going to war for democracy,” announced the leader of the Zionist Camp. He spoke about the right-wing government’s incitement against the High Court and against army officers, and accused Netanyahu of taking part in this incitement, just as he took part, according to Herzog, in the incitement against Rabin 21 years ago when he led the Likud.

Herzog should learn from the way Netanyahu operates. There is good reason he gets 26 mandates although rivals pop up from every direction on the right. One could say many things about Netanyahu’s rule, but he has a clear agenda on every issue. On the weightiest one — the diplomatic-security issue — Netanyahu is clear: As far as he is concerned, diplomatic negotiations with the Palestinians aren’t on the agenda. Since the outbreak of the Arab Spring, Netanyahu has argued that in the murky waters of the Middle East, Israel is an island of stability, and so this isn’t the time for adventures in peacemaking. Netanyahu works to build up the military: obtaining the newest submarines (as Ben Caspit has exposed for Al-Monitor) and fighter jets, and continuing to build walls and fences around Israel. At the same time, he talks about forming regional alliances with moderate Arab countries, but it isn't known whether he’s also acting on it.

On the media, Netanyahu has a clear doctrine. He believes that the more media power he will garner, the more he will be able to control the messages delivered to the public, and thus will thrive politically. He has a newspaper — daily freebie Yisrael Hayom owned by his associate Sheldon Adelson — in which he embitters the lives of commercial broadcasters through regulation, and he is working to obtain sole control over public broadcasting by trying to prevent the establishment of a new public broadcasting corporation.

When it comes to relations between the Knesset and the courts, the prime minister is not a devotee of the High Court; he backs legislation that would diminish the power of the High Court. Netanyahu does not stop Minister of Justice Ayelet Shaked of HaBayit HaYehudi in her latest moves against the High Court and the court system, which are thought by many parts of the government to lean left.

Netanyahu has backed Minister of Culture Miri Regev in her persecution of Arab citizens. He has even identified with a large part of her moves. The same goes with education and the infusion of content on Jewish heritage into school curricula, which started during the term of former Minister of Education Gideon Saar, who promoted high school student tours of Hebron. And if we are talking about heritage, as Akiva Eldar has written for Al-Monitor, Netanyahu identifies much more with the violent right-wing legacy of late Minister Rehavam "Gandhi" Zeevi than with Rabin’s legacy.

Also when it comes to preferring the interests of the ultra-Orthodox, Netanyahu has shown he has a clear agenda. He has allowed the dissolution of Yesh Atid’s "Equal Sharing of Burden Law" that would draft rabbinical school students and blocked train repair work on the Sabbath following pressure by ultra-Orthodox parties. Even if this is mere political calculation (Netanyahu is secular), he has been consistent.

Any segment of the public — it doesn’t matter on what side of the political map — wants to see a path. If Herzog hangs his political fortunes on Rabin’s legacy, he should know that before the 1992 election Rabin presented a clear plan as an alternative to Likud rule. On the crucial issue of diplomacy, it is unclear what his position is — especially considering the fact that until a moment ago he wanted to serve as Netanyahu’s foreign minister.

Herzog should present an alternative to the right on every issue. He has to work to incorporate former senior figures in the security establishment in his movement, such as former Chiefs of Staff Benny Gantz and Gabi Ashkenazi, and not to forfeit the field to Lapid. For the masses of people who came to Rabin Square to place renewed trust in the Labor Party or the Zionist Camp, Herzog needs to deliver much more than speeches about democracy and incitement. A courageous and creative action plan is needed. A political path is needed.