Prime Minister Benjamin Netanyahu and Zionist Camp Chair Isaac Herzog are practically in a tie, according to polls, but Netanyahu might tilt the balance with a charismatic speech to Congress. 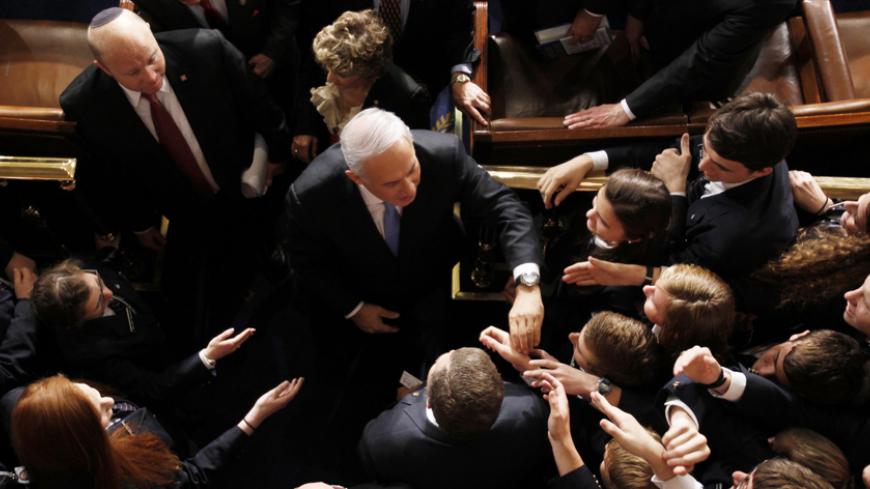 Israeli Prime Minister Benjamin Netanyahu shakes hands with US congressional pages after his speech before a joint meeting of Congress in Washington, May 24, 2011. - REUTERS/Jason Reed

There is only one more month until the Israeli elections take place March 17, and we are getting a much clearer picture of what is actually happening. This was supposed to be a multiparty race, with five or six midsized parties or coalitions — the Likud with Prime Minister Benjamin Netanyahu, the Zionist Camp with Isaac Herzog and Tzipi Livni, Naftali Bennett (HaBayit HaYehudi), Avigdor Liberman (Yisrael Beitenu), Yair Lapid (Yesh Atid) and Moshe Kahlon (Kulanu) — but it has turned into a head-to-head clash between Netanyahu and Zionist Camp Chair Herzog. Livni, Herzog’s partner in the Zionist Camp, has been pushed to the sidelines for concerns about her electoral pull (as Mazal Mualem reported here), after initially helping Herzog shoot up almost overnight into being almost on par with Netanyahu in terms of strength.

The balance of power between Netanyahu and Herzog places them in a dead heat. A rundown of the polls published over the past two weeks shows them head-to-head, with 25 seats each. The fact that this has become a race between the two men has been severely damaging to the other parties, which are regarded as increasingly less relevant. Bennett is plummeting in the polls, because his electorate is determined to “save the right” by voting for Netanyahu. Lapid is unable to leap ahead for the exact same reason. Kahlon and Liberman are in an even worse state. Then there are these three conspicuous additional factors:

The current assessment is that this tangled situation will force Herzog and Netanyahu to form a national unity government a day after the election. If the result is, in fact, a tie, the possibility of a premiership rotation agreement between them cannot be discarded. Netanyahu will certainly not be quick to give up two years in the prime minister’s office, but he could find himself in a situation in which the alternative is worse. If he loses his position to Herzog, it will take his Likud colleagues very little time to show him the door and lock horns over who will inherit the party leadership. Netanyahu has no intention of quitting and he has grown addicted to being Israel’s perennial prime minister. The truth of the matter is that the Israeli public has grown addicted to this reality too. When polls ask which of the candidates is most suited to serve as prime minister, Netanyahu continues to maintain his lead over Herzog by a considerable margin. Herzog may be a skillful politician, but he lacks charisma and a security background.

The well-covered police investigation into many prominent politicians and officials affiliated with Liberman’s party (Yisrael Beitenu) on the eve of the election laid waste to Liberman's grand plans. In a recent closed-door meeting, Knesset member Faina Kirschenbaum, the “center of the investigation” who used to be the most powerful woman to stand alongside Liberman, said that a deal had been reached between him, Kahlon and Lapid. According to her, they planned to consolidate into a single bloc after the election and recommend Liberman for the position of prime minister. The police investigation and the extensive coverage that it has received destroyed Liberman’s electorate. He has plummeted to just somewhere between five and seven seats in the polls. He has since been waging a recovery campaign and has managed to break past the new electoral threshold (which he himself implemented), while leaving himself a considerable safety net.

Nor is Kahlon’s campaign taking off, while Lapid could be this election’s big surprise again, with his powerful, carefully honed campaign. Another fact that must not be overlooked is the high number of undecided voters (around 20 seats are still up for grabs), and the fact that a large percentage of these undecided votes are from the center-left camp. In other words, we can still expect to see some surprises in these elections.

As of now, Netanyahu is still dictating the election agenda. Over the past few weeks, the prime minister has influenced the election campaign agenda on a daily basis, leaving his rivals far behind. Herzog, Lapid, and Kahlon are all trying to pull these elections into the socio-economic arena and in so doing, to strike at Netanyahu’s soft underbelly. But Netanyahu is using all his political wiles and the power of his position to drag everyone along after him. So far, it is actually working.

As of today, Netanyahu’s greatest electoral asset is US President Barack Obama. In the past, a well-publicized feud with the US administration would have toppled an Israeli prime minister, but the situation today is the exact opposite. Thanks to a series of serious mistakes that Obama made during his first term, Netanyahu and the right have managed to turn him into a kind of public enemy No. 1, ignoring the fact that under Obama, security cooperation between Israel and the United States reached an all-time high.

As these very words are being written, the state comptroller is slated to release a grim report about Netanyahu’s extravagant expenses and his hedonistic behavior. The main tool that Netanyahu has prepared to neuter the electoral impact of this report is the speech that he is expected to deliver to the US Congress on March 3, just two weeks before the election.

Netanyahu finds himself caught up in the serious consequences of this speech again and again. Over the past few days, it has been released that the United States has removed Israel from its intimate circle of confidantes in all matters concerning the negotiations with Iran. The various US representatives at the talks, among them Wendy Sherman and, of course, US National Security Adviser Susan Rice, have received explicit instructions from the White House not to give Netanyahu and his people any details whatsoever concerning the negotiations between the world powers and Iran, apart from the most general updates. This is a dramatic, almost unprecedented development, which, in other times, would have had a bone-crushing impact on the Israeli government. These days, however, it goes hardly even noticed.

In Maariv's Feb. 13 newspaper poll, some 56% of the public declared that “Netanyahu is right in wanting to present his position on the nuclear threat to the US Congress.” At the same time, however, and in the same breath, some 53% of the public said Netanyahu should cancel his trip to Congress or make do with addressing the American Israel Public Affairs Committee (AIPAC). When asked whether the US administration is interfering in the Israeli elections, some 61% of respondents answered with a resounding “yes.” There can be no doubt that since the days of such popular presidents as Bill Clinton and George W. Bush, there has been a strategic shift to the right among the Israeli electorate, paralleled by a slow but steady decline of the US administration’s position as a pro-Israel factor.

Given the current situation, the controversial address to Congress in early March could be the “tiebreaker” in the Israeli election campaign. Netanyahu is a brilliant orator. When he stands there at the podium with his perfect English, his polished accent, his creative imagery, and his fervor, just about every Israeli feels at least an iota of pride. Just about every Israeli is saying to himself that Netanyahu is the ultimate representative on earth. During all his years in office, Netanyahu never missed a single appearance before the UN General Assembly, and he appeared frequently before the AIPAC conference too. Each appearance built him up and added quite a few potential seats to his roster, for a period of weeks or even months. His appearance before Congress in March could be what wins Netanyahu a fourth term as prime minister of Israel, to Obama's chagrin, and perhaps even ire.