In an interview with Al-Monitor, Zionist Camp Knesset member Eyal Ben-Reuven says that the Iranian framework agreement does establish some limits on the nuclear project, and calls to focus on effective deterrence and tight control on Iran. 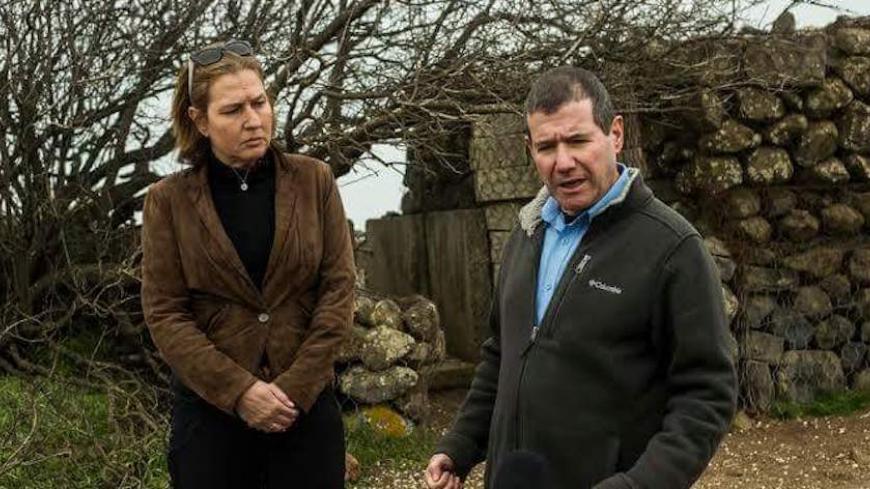 “It’s not too late; there’s still time for damage control of the nuclear deal reached with Iran,” newly elected Zionist Camp Knesset member Maj. Gen. (Res.) Eyal Ben-Reuven said. Ben-Reuven, who is expected to serve on the Knesset Foreign Affairs and Defense Committee on behalf of the Zionist Camp, told Al-Monitor, with reference to the progress made in the Lausanne nuclear talks, that a situation where Iran has nuclear weapons would be “intolerable for Israel.” As to the coalition negotiations, he believes that his faction should not enter a unity government led by Likud leader Prime Minister Benjamin Netanyahu.

Ben-Reuven has served in numerous senior posts within the Israel Defense Forces (IDF), including as commander of an armor battalion, head of a field branch and deputy commander of the Northern Command, for which he still serves as a reserve.

He started his political career in 2013 at the left-wing Meretz Party, wishing to voice his clear support of an agreement with the Palestinians, ending the occupation. Shortly before the March 17 elections, Ben-Reuven was ''recruited'' by Zionist Camp co-leader Tzipi Livni to join the party, reinforcing its military-affiliated leadership.

Al-Monitor:  Netanyahu keeps insisting that the agreement between Iran and the world powers endangers the very existence of Israel. Is this really true?

Ben-Reuven:  I don’t think that the strategic situation of Israel will [dramatically] change the day after the agreement is signed. Iran is already a nuclear threshold state. In fact, although Iran has been hard hit by the sanctions, it persistently pushed forward with its [nuclear] program.

True, a better agreement could have been reached than the one currently emerging. However, whether we like it or not, we are in a situation where the agreement is about to be signed before long. And Netanyahu cannot possibly prevent it, as the powers that have said "yes" to the agreement are indeed mighty. Thus, under the present circumstances — and I’ll put it bluntly — we have no choice but to stop whining and start acting. In other words, we have to do everything we can by June 30 to minimize the damages and maximize the benefits.

And when I say “to minimize the damages” I mean that we should strive to introduce into the agreement a clause pertaining to the development of ballistic missiles. After all, the issue of uranium enrichment is not the only one on the nuclear agenda. To realize your nuclear capability, you have to mount nuclear [warheads] on missiles. I believe that we can have a say in the matter.

The issue of supervision is no less important: We should make sure that the supervision [of Iran’s nuclear program] is real and serious — and this has not been the case so far. We should ensure a level of supervision capable of dealing with the Iranians, who — as we known — do not have a reputation of being reliable.

And there is a third issue: We have to formulate in collaboration with the Americans an effective program to deal with a situation where the agreement fails. That is, we have to prepare a deterrence program for implementation in the event the Iranians fail to fulfill the agreement. It should comprise contingency plans for imposing harsh sanctions, as well as operational plans for a military offensive. In this context, a very high level of coordination between Israel and the international community can be ensured, where the activities involved would be in part covert and in part overt — the latter serving as a deterrent.

The Iranians need to understand that they have a sword hanging over them and that should they violate the agreement, they are in for a crushing blow they won't be able to survive. That’s the arena we have to play in. If we opt for effective deterrence and supervision, I believe that while the agreement may not roll the program back to a significantly earlier stage, it will [at least] set clear-cut limits to curb it. And this is the bright side.

Al-Monitor:  Can Netanyahu still have any influence, given all the bad blood between him and US President Barack Obama and the antagonism and distrust that characterize their relationship?

Ben-Reuven:  It’s not going to be easy, because the prime minister has alienated himself, deserting midfield.” I compare it to a soccer field. Driven by his desire to sway the electorate and influence the outcome of the recent [March 17] elections, Netanyahu turned to the audience, seeking shelter in the stands — namely, in the US Congress. Yet, while Congress no doubt wields power, it is not where the decisions are made. Thus to a large extent, we [in Israel] have found ourselves off the field. Netanyahu should therefore give up the approach of “I am the hero setting out to challenge the entire world.” It has done us no good. To be sure, Netanyahu has to be credited for pushing the issue to the top of the [international] agenda. However, in recent months he has alienated himself, leaving midfield to the [world] leaders. And to minimize the damage already done in view of the agreement, Netanyahu must take advantage of the time left until June, sit down for a tete-a-tete with Obama and talk matters over.

Al-Monitor:  To what extent will Israel be exposed to a real existential threat the day after such an agreement is signed?

Ben-Reuven:  It goes without saying that Israel must prepare for a situation where its goals are not met, and God forbid, Iran attains nuclear capability. This would no doubt present a dramatic change in our strategic situation, and on this point, I totally agree with Netanyahu. We unanimously agree that the State of Israel has to prepare all the options, since Iran aspires to achieve worldwide power, and above all, to gain control in the Middle East. And this is the real danger. Nuclear [capability] is just the means to an end.

We see what's going on right now in Yemen and Syria. Iran is present there. It is present in Lebanon as well, where it maneuvers Hezbollah, and it is also present on the southern front [of Israel], vis-a-vis Hamas. Given this situation, if any serious event involving Hezbollah flares up in the future — calling for an Israeli response — while Iran is in possession of a nuclear capability and threatening Israel, that will be a dramatic change, intolerable for the State of Israel.

On the whole, Israel's strategic situation is getting ever more complex. Until last year, the boundaries of the conflict with Hezbollah were clearly demarcated. These days, we can already see them through the binoculars, in the Golan Heights. At the same time, nation-states in the Arab world are changing shape and territorial boundaries. And there is not much we can do to influence the events. The best we can do in this setting is to be strong and prepared for any outbreak in the region, to defend ourselves and to emerge the victors. And to that end, we have to adopt a different course of action, quite unlike the one we pursued in Operation Protective Edge [in the summer of 2014].

Ben-Reuven:  The war on terror is a never-ending war. We have to respond promptly and forcefully, and to bring the campaign to a speedy conclusion. This was not the case in Operation Protective Edge or in the [2006] Second Lebanon War. In the war on terror, international legitimacy is the name of the game. Therefore, it was necessary to launch a ground offensive as quickly as possible. Israel has to enter into battle in full force so as to end the campaign in the shortest time possible.

This did not happen [in Operation Protective Edge] due to the fear that the toll in human lives would be too heavy. Naturally, I would rather have a war without casualties. But I would not accept a war that ends without a victory. In Operation Protective Edge, the home front was exceptionally supportive and the mobilization of reserve forces was impressive. The IDF is an excellent army. I know it deep inside — both the regular and reserve forces.

However, this was met with irresolution on the part of the prime minister in Operation Protective Edge, and worse than that, nothing happened in the diplomatic arena. A military move does not stand on its own. It is up to the statesmen to reap diplomatic fruits from the military move — that is, to initiate negotiations with the other side from a vantage point.

Al-Monitor:  And is there someone to talk to on the other side?

Ben-Reuven:  In today's reality, given the deep lack of trust between us and the Palestinians, the bilateral axis should be reinforced along two other axes — that of the countries of the region and that of the international community. One cannot ignore the strong common interests that have recently come into play in the region, especially with countries such as Turkey, Egypt, Jordan and the Gulf states — in view of the Iranian threat and the threat posed by the Islamic State to the entire region. The picture was quite different 20 years ago. The State of Israel should thus take on the regional challenge, with the help of the international axis, joining forces with the Americans and Europeans.

Netanyahu realizes it, but he is not interested in reaching an agreement with the Palestinians. And he is not ready to pay the price as he believes that it is bad for Israel.

Al-Monitor:  Could it perhaps be best if the Zionist Camp joins a national unity government led by Netanyahu and exerts its influence from within?

Ben-Reuven:  At this point, I'm against it. We have a prime minister who does not want peace with the Palestinians, and who is leading us to an undesirable state — in the long run, a binational state. I'm driven by ideology, and going with Netanyahu is not the goal for which we have been striving. Past experience shows that entering any of the Netanyahu-led governments in recent years never worked out. It has never proved to have any effect on him. Invariably, he had it his own way, leading the country as he deemed fit.