Ahead of Israel's Memorial Day, Knesset member Omer Bar-Lev explains in an interview with Al-Monitor that the 1973 Yom Kippur War instilled in him the understanding that only a diplomatic solution can bring Israel security and peace. 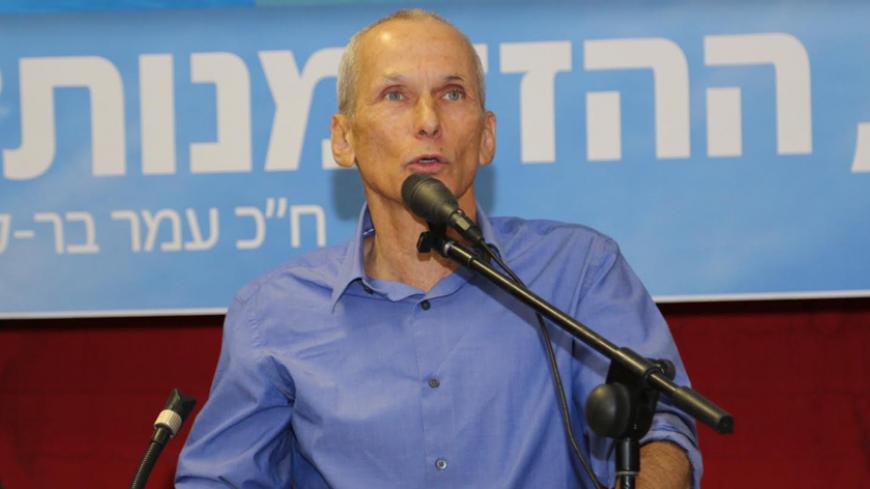 Omer Bar-Lev delivers a speech in this undated picture. - Office of Omar Bar-Lev

It was the same when he served as commander of the elite Sayeret Matkal commando unit (1984-87) as it is now, when he is a Knesset member for the Zionist Camp. As Memorial Day for Israel’s fallen soldiers approaches, Omer Bar-Lev must decide where he should be: at one of the nation’s official events, or beside the grave of an old schoolmate and friend in the Kiryat Shaul cemetery. After deliberating, Bar-Lev decides in favor of his personal memories. This year, when the siren goes off at 11 a.m., he will again be standing over the grave of his friend Gideoni, within a 50-meter radius of the graves of three more boys from his class at Ramat HaSharon Public School.

Bar-Lev, a colonel in the reserves, is the son of Haim Bar-Lev, who served as the Israel Defense Forces’ eighth chief of staff and later as a minister for the Labor Party. He calls his participation in the 1973 Yom Kippur War the most formative event of his life, and it shows in his own private Memorial Day. Even now, during his political career, the war continues to influence him, serving as a kind of moral compass. In an interview with Al-Monitor, Bar-Lev recalls the daring operation that led to the release of the hijacking victims in Entebbe, during which his commander Yoni Netanyahu, brother of Prime Minister Benjamin Netanyahu, was killed.

''We need to return to the spirit of Entebbe, to the creativity and daring of that operation," he said. "We need diplomatic creativity, because I cannot see any situation in which we continue to rule over another people 50 years from now.”

Al-Monitor:  What was it about the Yom Kippur War that shaped your worldview?

Bar-Lev:  The Yom Kippur War influenced my entire generation. I was in the regular army then. My generation and I served as cannon fodder during the Yom Kippur War. The regular army was supposed to block the attack, and did so with our bodies. If I reflect back on my peers at the Ramat HaSharon Public High School, I recall that three of my classmates received medals for valor: Ilan Gidron, who was killed; Uri Rosenshein, who was seriously injured and lost an eye; and Yoni Ilani, who left for the US after the war. There were five casualties among us. Only a few of us, myself among them, came out of the war unharmed.

Before the war, I had turned down a chance to become an officer. After the war, I could no longer refuse, especially after so many close friends were killed and injured in the fighting. In general, the experience caused me to understand what the cost of war really is. It caused me to realize that it takes more than just force to win a battle. For us, the Yom Kippur War was a huge success, both tactically and operationally, but it was Egyptian President Anwar Sadat who achieved his meta-objective. He went to war to shatter the status quo, and he succeeded in doing just that.

Operation Protective Edge proved the limits of force yet again. It showed us that even if our military and technological capacities and strength were so significantly greater than those of the other side, we ended up engaging in the longest war we ever fought — 51 days — and all that fighting didn’t decide anything conclusively. Nor did we bring about any diplomatic change, either.

Al-Monitor:  What should have happened?

Bar-Lev:  Whenever the State of Israel fails to exploit a military move like that to advance some diplomatic move under the most super-optimal circumstances imaginable, it is a problem. We have the same interests as Saudi Arabia, Jordan, the Gulf states, the United States and Europe. We could have weakened Hamas and furthered rehabilitation and development in Gaza in exchange for demilitarization. We should have taken advantage of that. Without a diplomatic process, it is only a matter of time until the next round.

Al-Monitor:  In a speech you gave in the Knesset to mark the 37th anniversary of the Entebbe operation, you said that we need a diplomatic Entebbe. What did you mean by that?

Bar-Lev:  The entire Entebbe operation was built around improvisation and initiative. I think we have a lot less of that today. Operation Protective Edge highlighted this rather accurately. They say that generals always plan the last war. To some degree, this was very characteristic of Operation Protective Edge. We took all of our battalions and brigades, all the power and strength of the IDF [Israel Defense Forces], qualitatively and quantitatively, and went to war against an army of 15,000 people armed with fairly primitive weapons, and yet we failed to achieve a decisive victory.

Our problem isn’t in the quality and quantity of our arms and ammunition. Our problem is that we don’t ask whether we should change something about our theory of warfare and the spirit behind it. In the end, even all the air force’s smart bombs left no impression on them. They weren’t enough to cause them to raise a white flag of surrender even after 10 days.

It would be too dangerous to say, “It’s not an army. It’s a group of disorganized forces, and it is impossible to grab the head of the snake so that we can crush it.” I don’t accept that. True, it’s difficult, but that’s where our creativity should come in.

Al-Monitor:  You knew Yoni Netanyahu and his brother, Prime Minister Benjamin Netanyahu. You also served in the Matkal unit, which was a prime example of thinking outside the box. Has Netanyahu lost that?

Bar-Lev:  I think so. There’s no initiative. In that same speech I said to the prime minister: Take an example from your brother. The operation in Entebbe was an expression of the Zionist spirit to move forward always, never to be passive and never to be dragged into situations beyond our control; to be bold, innovative and creative. Where is all that now? Even Israel’s approach to security lacks creativity. It lacks initiative.

Al-Monitor:  You must be referring to the diplomatic process. What do you think will happen here without a diplomatic arrangement? Will we lose the Zionist majority, as some people warn? Will the Zionist project come to an end?

Bar-Lev:  I don’t believe that the State of Israel in its current configuration as Jewish and democratic will continue to rule over the Palestinian Arabs for the next 50 years. I don’t believe that we will be in this situation 50 years from now. It doesn’t matter if there will be 2.8 million Arabs in Judea and Samaria, or 1 million or 5 million. In the 21st century — and in the latter half of the 20th century, for that matter — it is impossible not to grant equal rights to every single human being as long as you consider yourself part of the enlightened, democratic world.

As a Zionist, I do not believe that we will give up on the State of Israel as the nation-state of the Jewish people. That is why we will separate from them. Will it occur of our own initiative, as a result of some international initiative or as the consequence of some catastrophe or other? I don’t know, but the current situation cannot continue. That is the spirit that moves me forward, too. I entered politics to make sure that this separation doesn’t take place 30 years from now, but rather within the next decade. And it will.

Al-Monitor:  On the eve of Israel’s 67th Independence Day, are we faced with an existential threat, as the prime minister warns?

Bar-Lev:  The security situation of the State of Israel was never as good as it has been over the past few years. The existential threats have been reduced considerably. There is a potential Iranian threat, but that should be reduced over the next decade, too, because of the agreement. Israel is getting stronger, too. Even if Iran had a nuclear bomb, I still don’t believe that they would consider launching a nuclear war against Israel, because the consequences of that would be devastating also to them.

I don’t think that there is any existential threat looming over the State of Israel. I think that tactical threats like Hamas and Hezbollah, as severe as they might be, do not threaten our security. At this moment, even the Iranian threat is not an existential threat, though it does have the potential to develop into such.

Al-Monitor:  The Zionist Camp lost the election. It looks as if you lost the ability to return to power.

Bar-Lev:  I don’t have a deterministic attitude toward life. Personal experience has shown me that in all kinds of circumstances, when things allegedly couldn’t have gone any differently, something happened and the situation turned itself around entirely. That was what happened with the revolution in Egypt and during the fall of the Eastern Bloc. Who imagined that something like that could have happened? That is why I refuse to accept that if the center-left bloc didn’t win now, it can never happen. It will happen. I don’t know if it will be in the next elections. I don’t know what will cause it. In the end, however, all it will take is for three seats to shift from the right to the left, and that will happen eventually. As of now, it is quite obvious that we are headed to the opposition. I have absolutely no doubt that we must not enter a right-wing government.