Knesset (Res.) Colonel: 'We Can Withstand' the Syrian Threat 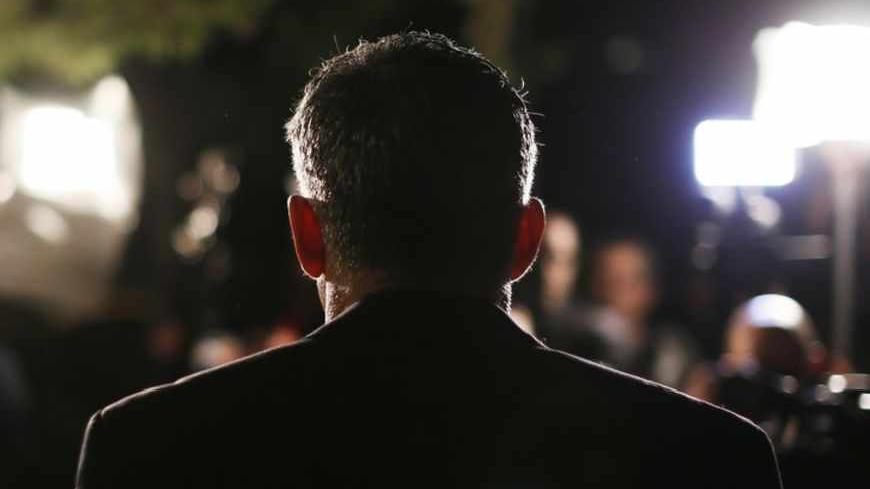 Yair Lapid, leader of the Yesh Atid (There's a Future) party, speaks to reporters outside his home in Tel Aviv, Jan. 23, 2013. - REUTERS/Amir Cohen

“Finance Minister Yair Lapid is turning out to be a shocking right-wing conservative,” says Knesset member Omer Bar-Lev of the Labor Party, analyzing the finance minister’s position on the Israeli-Palestinian conflict, as expressed in an interview he granted The New York Times. The interview, in which Lapid addressed diplomatic issues, was published this week [May 19] and quoted extensively by the Israeli media.

Bar-Lev is a reserve colonel, a former commander of the IDF Sayertet Matkal elite unit and the son of the IDF’s eighth chief of staff, Haim Bar-Lev. He thinks that behind Lapid the politician, who won significant support from the center-left, hides a “[Prime Minister Benjamin Netanyahu] ‘Bibi clone,’ who is now showing his true face.”

In an interview with Al-Monitor, Bar-Lev terms Lapid a “diplomacy refusenik.” He addresses excerpts from the interview in which Lapid said, among other things:

“East Jerusalem must remain in Israeli control because we didn’t come here for nothing. Jerusalem is not a place, it’s an idea.” Lapid was also quoted as saying he “would not stop the so-called ‘natural expansion’ of settlements in the West Bank, nor [would he] curtail the financial incentives offered Israelis to move there.”

Bar-Lev, a member of the parliamentary foreign affairs and defense committee, is troubled by these positions, which he regards as being tantamount to heresy of the two-state idea. According to Bar-Lev, “Lapid’s attitude to the Palestinian issue does not bode well for the diplomatic horizons of this government. Justice Minister Tzipi Livni has been left there on her own, vis-à-vis Yisrael Beiteinu, HaBayit HaYehudi, the Likud [right-wing parties] and, it now turns out, Lapid, who thinks like them.”

And what about self-criticism? The Labor Party too, which carried the peace flag for years, is turning out to be passive and even tried to dissociate itself from it before the election campaign.

“It’s true that up to the elections, we were passive. We reached the wrong conclusions. Labor party leader Shelly Yachimovich, too, has admitted in various fora that it was a mistake on her part. I know she plans to be active on this issue. The next Labor Party convention will deal with the diplomatic issue. There will be a series of debates and perhaps they will serve as the basis for a diplomatic plan that we will present afterwards. As a member of the foreign affairs and defense committee, I deal with the diplomatic issue from the opposition. I demanded an urgent committee meeting with Tzipi Livni, the minister in charge of negotiations [with the Palestinians], for her to brief us on what’s happening on the diplomatic front, if anything.”

Is it possible something is happening behind the scenes that we don’t know about?

“I don’t think anything will happen in the diplomatic field with this government. For now, one cannot even talk about preserving the status quo because the minute you don’t go forward, and unilateral steps are made on the ground, then you are, in fact, going backward. I’m pessimistic. Maybe something will move here if the Americans press really hard.”

As a member of the foreign affairs and defense committee, what marks do you give the government on its conduct vis-à-vis Syria? Should it have addressed the massacre going on there?

“That Israel isn’t responding publicly and intervening in Syria, that is right. From a humanitarian standpoint, there are horrific things going on there, but it’s not our job to address them. It’s the job of the world. On the other hand, the leaks on the part of senior officials, saying that we’re for or against Syrian President [Bashar al-]Assad’s continued rule are unnecessary. The policy should be one of complete nonintervention.”

Nonetheless, how concerned should Israel be by the changes in Syria?

“We’re not facing an existential threat from Syria. The Syrian army is much weaker than it was about two years ago and it’s falling apart. They can fire missiles at us, they can transfer non-conventional or tie-breaking weaponry to Hezbollah, but it’s not a threat that endangers our existence here. We can withstand it. It won’t be pleasant, there will be casualties, but we have a response. In general, I think the condition of our security is good.”

Good? How exactly? What about Iran? Syria? Egypt? The storms around us?

“It’s true, we’re not Switzerland, but compared to other times, 15, 30 and 40 years ago, our condition is better. From a strategic standpoint, the main threats facing us are Iran and the possibility of turning into a bi-national state. As far as Iran goes, the US is standing by us; as far as the danger of becoming a binational state — that is a long-term strategic threat, but on that issue, too, there’s a confluence of interests between Israel and the US.”

And what about the claim made in recent days by Knesset member Amram Mitzna, that he is concerned by the inexperience of the diplomatic and defense cabinet?

“I agree that there’s a problem. Prime Minister Benjamin Netanyahu, Livni and Defense Minister Moshe Yaalon have diplomatic experience, but three other members are totally inexperienced: Lapid, Communication Minister Gilad Erdan and Economy and Trade Minister Naftali Bennett. On defense issues, sometimes the choice is between two bad options and this is where experience plays an important role. The ability to challenge the professional experts who appear before the cabinet is important. I don’t see how inexperienced people like Lapid can critique these people, either in a positive or negative manner.”

“It would be better if he sent to the cabinet, instead of himself, Science Minister Yaakov Perry from his party (the former director of the Shin Bet security agency). It makes much more sense.”