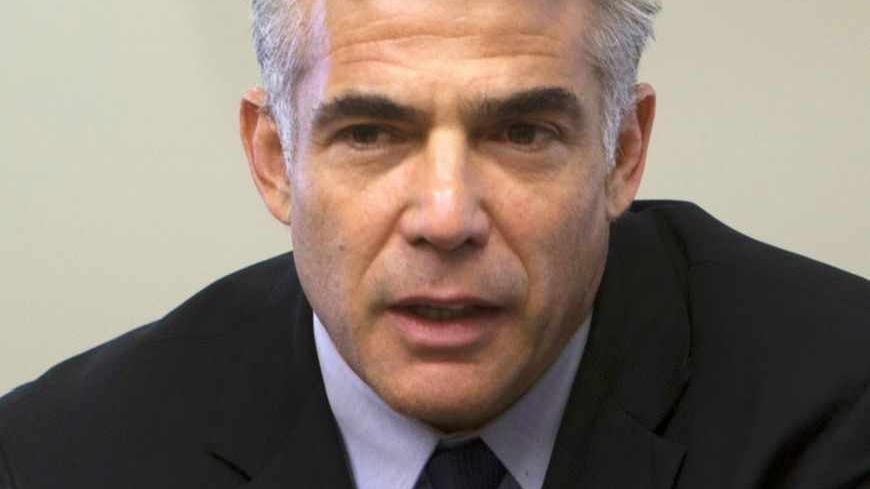 Within a week, Finance Minister Yair Lapid has managed to open two fronts vis-à-vis his own electorate. His voters — who have barely had time to recover from the austerity budget with which he burdened them despite promises to the contrary — are finding out that Lapid is circling them from the right, as reflected in the much-discussed interview with him published in The New York Times [May 20], in which he outlined his vision of the diplomatic process.

To be exact, it’s not actually a vision, but rather a string of skeptical remarks revealing him as a ''[Prime Minister Benjamin Netanyahu] Bibi clone'' (As described by Knesset member Omer Bar-Lev in an interview with Al-Monitor on May 21). He does not believe it’s possible to reach a peace agreement with the Palestinians; he opposes the division of Jerusalem and a freeze on construction in the settlements; he calls Palestinian Chairman Abu Mazen “one of the founders of the Palestinian victimhood doctrine” and he is doubtful that the Palestinians even want a state. In fact, even Likud party hardliners like Knesset members Danny Danon and Tzipi Hotovely, the darlings of the settlers, would gladly have signed off on the text of the interview.

Immediately after the interview was published, Lapid understood that he had swerved too sharply to the right and tried to control the damage. On Monday, May 19, at the start of the weekly meeting of his Yesh Atid Party’s Knesset faction, he asked to clarify that “anyone who thinks it’s possible to reach a diplomatic agreement that doesn’t include two states for two people — is wrong."

Is that so? Perhaps the mistake is that of the finance minister himself, who looks more like a pilot in the throes of a vertigo attack than the hero of the recent elections, head of a centrist party or, to be precise, a center-left party. The four or five mandates he got from the Likud in the elections don’t form part of his electoral base, which is deeply rooted in what is commonly referred to as “the white [Ashkenazi], well-established, Israeli tribe”. Most of those who fit this description flocked to Yesh Atid from the Kadima party and have long since crossed the psychological hurdle and come to accept the “two states for two people” formula. They will also be able to fully accept former Prime Minister Ehud Olmert’s far-reaching vision of dividing the country.

It’s therefore not quite clear what Lapid was trying to achieve by presenting himself as an uncompromising hawk toward the Palestinians. Does he wish, by doing so, to bite into the right-wing electorate of the Likud-Yisrael Beiteinu and HaBayit HaYehudi parties? Is he trying to deflect attention from the “Lapid budget cuts” which have had a worrisome effect on his popularity ratings, or, did the finance minister simply show up unprepared for the interview?

I tend to discount the third option because Lapid is one of the most careful and well planned politicians ever to operate here. Therefore, it’s fair to assume that Lapid, who once again admitted in the interview that he plans to replace Benjamin Netanyahu as prime minister, thinks that in order to implement his plan he also needs the right-wing voters and is already starting to turn to them.

But of the many mistakes Lapid has made in his short term as finance minister, adoption of right-wing rhetoric is, in my view, the most serious. Lapid’s voters understand that some of the cuts inflicted on them were unavoidable. They know he received a “legacy from hell” amounting to a deep budget deficit of tens of billions of shekels; they know he has only been in office a total of two months and they even dare hope that in two years we will find out that he was right, that things will improve. When Lapid says that he understands those who attack him, he still manages to stir empathy among his voters, who see him being attacked daily from every direction.

But when Lapid reveals himself, in his first interview with the foreign media, not just as Benjamin Netanyahu’s economic twin, but also as his political twin, they have the right to feel cheated, justifiably so.

And not just them. How exactly are members of Lapid’s Knesset faction, government ministers Yaakov Peri and Yael German, supposed to feel? Peri, the former director of the Shin Bet security agency, a prominent activist in left-wing peace initiatives, and German, who for years was a proud member of the [left-wing] Meretz party.

And what about the finance minister’s best friend, Knesset member Ofer Shelah? Shelah is deepy rooted in the political left-wing, as reflected until recently in his journalistic commentaries and since then in his comments as a politician. Shelah, for example, regards Lapid’s view that there’s no need for a diplomatic arrangement with the Palestinians as dangerous for Israel.

It’s true that during the election campaign, Lapid shied away from issues of diplomacy, clouding his views and appealing to the soft-core of the right wing by launching Yesh Atid’s campaign in the West Bank town of Ariel. It’s true, as well, that he was careful not to express himself on the Israeli-Palestinian conflict and left that arena to Tzipi Livni (HaTenua party) and Zehava Gal-On (Meretz).

That’s how he managed to win over voters from the right but also to maintain the support of the “white tribe” which assumed that since he was one of them, and is friends with Olmert, he also thinks like them on diplomatic issues. They hoped that Lapid’s flirt with the “soft” right was simply part of a successful campaign.

Therefore, what’s likely to hurt Lapid in the long run, even more so than his conduct as finance minister, is the political vision of someone regarded by the Americans as a “ray of sun” in Israeli politics. Lapid presented a political world view that is totally opposed to that of most of his voters. This dissonance could prove fatal. Look what happened to Labor party leader Shelly Yachimovich.