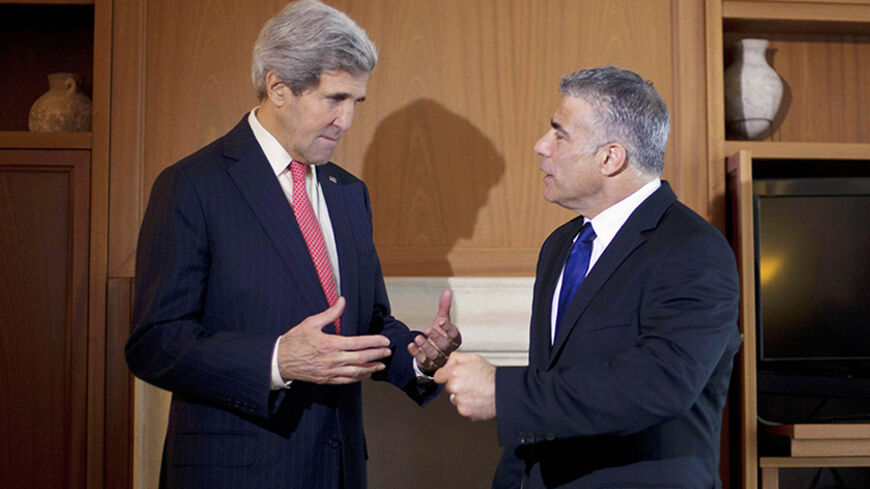 Of the five policy speeches delivered at the Herzliya Conference on June 8, the speech given by Chairman of the Yesh Atid Party Yair Lapid was the most interesting and groundbreaking, and the most important. Not only did it include the red lines, which, if crossed, would entail quitting the government; more importantly, the finance minister’s message indicated for the first time that he had finally given up his plans to one day become prime minister with the support of the “soft right.” Instead, he was meticulous about addressing his own electorate, which is planted deep in the center-left and worth at least 30 seats out of the Knesset's 120.

Lapid presented a three-stage plan to separate from the Palestinians, wishing to renounce economic responsibility for the isolated settlements. This was certainly not the same Lapid who launched his political route as part of the diplomatic right wing. This change should not be taken lightly, either. Right now, Lapid is really the person in control of the Netanyahu government. With his 19 seats, he could topple it single-handedly, and in fact, he is using the power of those seats now, for the first time, in the diplomatic arena. By doing so, he has effectively set up an hourglass to determine how much longer this government will last.

The reasons that Lapid finally made his decision to abandon his plans to increase his political clout by appealing to the right, were a series of polls that flew right in his face. They showed that his electorate had grown disappointed with him, not only because he had shown no interest in diplomatic issues, but also because he had expressed hawkish views. This has long been a problematic strategy on his part, since Lapid had to attribute his position as head of the second-largest party in the Knesset to the seats he received from the center-left.

“We are facing an unprecedented crisis in our relationship with the United States. It is a crisis that results from our problematic and often disdainful behavior,” he said, attacking Netanyahu’s policies, before calling on us to take our fate into our own hands, and sketch out what the country’s borders should be.

Prime Minister Benjamin Netanyahu replied immediately with a stinging retort, saying at the Likud section weekly meeting on June 9, “Lack of experience in negotiations and lack of experience in security will lead to a hasty plan.” On the other hand, Netanyahu’s response actually serves Lapid’s interests, as he struggles to win back the Israeli center-left. Lapid fully understands that in the vacuum that has emerged with the collapse of the diplomatic process, he needs to break away from the prime minister to highlight Netanyahu’s failures, while simultaneously presenting himself as an alternative to Israeli chief negotiator Tzipi Livni.

Lapid introduced “the new Lapid” at the Herzliya Conference. He really was the only speaker to say anything new, and considering what everyone else had to say, his comments really did stick out.

The chairman of the Labor Party, Knesset member Isaac Herzog, delivered a properly constructed no-surprise opposition speech in which he attacked the HaBayit HaYehudi Party and called on Lapid to quit the government so that together they could advance the diplomatic process. Nevertheless, what he said was predictable. The chairwoman of Hatnua Party, Justice Minister Tzipi Livni, once again lashed out against the settlement enterprise. She spoke about the importance of separating from the Palestinians and called on the government to continue to cooperate with the Palestinian unity government, as if she wasn’t a part of the government under whose watch the negotiations collapsed.

Naftali Bennett, the chairman of HaBayit HaYehudi, repeated his provocative diplomatic plan to annex additional territory. Meanwhile, Interior Minister Gideon Saar, who represented the prime minister’s Likud Party, sang the praises of the status quo (“There is no basis for the attitude that the status quo is a bad thing,” he said at the start of his speech), and in doing so, dismissed the consequences of the talks collapsing, which can already be seen in the shift of the US position.

In many ways, Lapid’s speech at the Herzliya Conference was also the finance minister’s diplomatic farewell speech to Netanyahu. As someone who first presented his approach to the diplomatic process in the West Bank city of Ariel before the last election, hoping to win votes from the right for his new party, he completed a sharp U-turn on Sunday and landed right back in the heart of the moderate Israeli center.

Lapid’s “divorce speech” at the Herzliya Conference introduces him for the first time as spearheading a focused and carefully elucidated diplomatic agenda. It aligns with the positions of his electorate, a group that has too often been confused by Lapid’s hawkish diplomatic stances and the way he tended to distance himself from diplomatic issues.

Lapid has come a long way ever since he joined the government as a freshman minister. To understand how far he has come, it is worth recalling an interview that he gave to The New York Times in May 2013, shortly after the government was formed. In a condescending way, Lapid declared that Palestinian President Mahmoud Abbas wasn’t a partner. He declared that he did not support halting construction in the settlements, that Jerusalem must not be divided and, in general, that it was impossible to reach an arrangement with the Palestinians at the present time.

Politicians on the left were correct in calling him “Bibi's (Netanyahu’s) twin,” though Lapid’s brotherly alliance with the leader of the burgeoning right and champion of the settlers, Naftali Bennett, contributed to that as well.

There was good reason why so many of Lapid’s supporters rubbed their eyes in disbelief and started to question his motives and rationale. Even the most extreme right-wingers like Deputy Ministers Danny Danon and Tzipi Hotovely could identify with what he was saying.

Senior members of Lapid’s party were right in shifting back and forth uncomfortably, particularly Health Minister Yael German, a former member of the Meretz Party, and the former head of the Shin Bet, Minister of Science Yaakov Peri, who has been calling for negotiations with the Palestinians and, ultimately, for separation for many years now.

It took several months for Lapid to realize how much damage he actually caused himself. His bizarre diplomatic position and the mistakes he made as finance minister became a lethal combination for the man who had declared from the very beginning that he regarded the position of prime minister as his ultimate goal. With polls lashing out at him from week to week, he started to recognize that he had to find his way back to the hearts of his electorate.

The “divorce speech” was the first time that Lapid sounded as if he actually believed himself, when he spoke about the need to part ways with the Palestinians, even if it were done unilaterally. In the past, Lapid’s statements sounded like strained sloganeering. This time, Lapid showed that he was in complete control.

First of all, he drew a connection between the knowledge he accumulated as finance minister and the question of “Where’s the money?” Lapid is a gifted orator. He knows how to present his arguments in terms that are accessible to everyone. When commenting on the connection between the settlements and the country’s socioeconomic situation, he said, “Our settlements cost us a lot. They have a negative impact on growth, on the GNP, and on our economic ties with the rest of the world. … Buried somewhere between Itamar and Yitzhar [settlements] is the money that we can use to create smaller classrooms and better health services, to reduce inequality in Israeli society, and also for Iron Dome and Arrow missiles and a stronger IDF [Israel Defense Forces].” It was a perfect description of the current state of affairs to a center-left audience, and much more comprehensible than the long-winded explanations of the left.

It is not yet clear how realistic it will actually be to implement Lapid’s diplomatic program. Nevertheless, it positions him on stage as a significant player, and not just someone mindlessly reciting slogans about the need to separate from the Palestinians.

And Lapid refused to remain committed to his old friend Bennett. Instead, he used this speech to distance himself from the HaBayit HaYehudi leader bluntly and conclusively by calling his annexation program a plan designed by far-right elements, “that is pushing Israel to deceptive ideas of annexation, which will ultimately lead us to the disaster that is a binational state.” And there was even a threat: “I don’t know if it is some PR exercise or a genuine statement of intent, but we will not allow it to happen. If there is a unilateral attempt to annex as much as a single settlement, Yesh Atid will do more than just resign from the government. It will bring the government down.”

With this, Lapid completed his own separation from Bennett and Netanyahu. Though it is late as divorces go, he plans to use it to restore his lost political clout and even to win the support of voters disappointed with Tzipi Livni.