Yesh Atid Chairman and Minister of Finance Yair Lapid has changed course, openly supporting the talks with the Palestinians, but his statements must be followed by deeds. 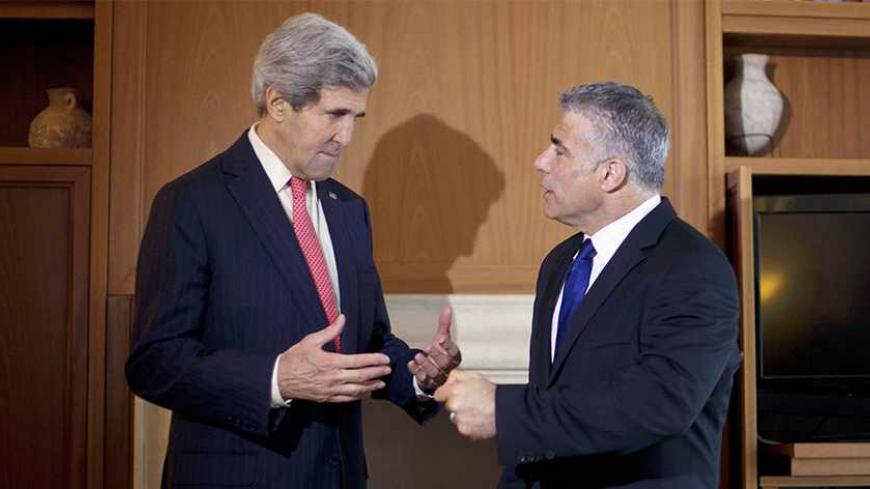 “I chose to talk today about the topic that will have the most decisive impact on the economy of Israel and on Israeli society: the diplomatic process.” This was the opening line of a post Minister of Finance Yair Lapid published on his popular Facebook page on Dec. 8. In the text, which is no less than 1,500 words long, he explained the economic and other damages that Israel will incur in the absence of a diplomatic process, the threat such a situation would pose to the Jewish state — the annexation of 3.5 million Palestinians — and why he would back the prime minister and support a change in the coalition setup if that will be necessary.

This is one of the longest posts Lapid has written since he entered the government, and the only one dealing from beginning to end with the diplomatic process and the role of his party, Yesh Atid, in advancing the issue. Since the election campaign a year ago, Lapid has kept his distance from the Palestinian question, and when he did speak out on the topic he sounded like one of the members of the Likud's extreme right wing.

In an interview with The New York Times last May Yesh Atid's chairman explained why he is not sure it will be possible to reach a peace agreement with the Palestinians. He expressed opposition to the division of Jerusalem and the freezing of settlement construction, defined Palestinian Authority Chairman Mahmoud Abbas (Abu Mazen) as “one of the founding fathers of the victimizing concept of the Palestinians” and raised doubts as to the Palestinians’ real wish for a state. Following this interview, Lapid had to provide explanations to his center-left voters who already had a hard time accepting his alliance with Naftali Bennett, HaBayit HaYehudi's leader, who became the political stronghold of the settlers and some of whose representatives are the most right-wing members of the Knesset.

Since then Lapid has come a long way, or more accurately, has significantly changed his positions. He frequently interviews with the foreign press regarding his commitment to the peace process. He deals with the negotiations in his speeches and even succeeds in getting some headlines and provoking the Israeli political system a bit, when he declares that he would support a change in the makeup of the coalition for the sake of the diplomatic process. Lapid essentially says that he would support the ousting of Bennett from the government, with whose help he succeeded in forcing Prime Minister Benjamin Netanyahu to compose a coalition without the ultra-Orthodox — in what has turned out to be the only “accomplishment” of this political alliance.

Lapid is trying to recover the seats that Yesh Atid is losing at an alarming rate, mostly to the left-wing parties. His collapse in the polls has gone on for some months, and Lapid has reached the conclusion that his salvation will come from raising the flag of diplomacy. Thus, he will distinguish himself from Netanyahu, blot out the stains of the problematic connection with the extreme right and prevent his voters fleeing to the Labor Party headed by Isaac Herzog.

While on his Facebook page Lapid warmly congratulated Herzog on his big victory in the primaries, in plain political terms he would have preferred that Knesset member Shelly Yachimovich would continue to lead the Labor Party. Herzog, who is identified with the diplomatic banner much more than Yachimovich, challenges Lapid and forces him to increase his activity in this arena. The combination of falling poll numbers, Herzog’s election and the general identification of Hatnua Chairwoman Tzipi Livni as the leader of the diplomatic process in the government, has put Lapid’s back against the wall.

Lapid is not the first politician, and certainly not the last, to make a significant change in his agenda. He should not be judged harshly for his past mistakes, especially when his lack of political experience is taken into account. Instead, it is possible and necessary to demand that he is clear and practical in his work to advance the diplomatic process. He has already shown that he can explain himself well in writing and in his speeches. Now comes the time for action.

Lapid must translate his political power into direct pressure on Netanyahu, so that the prime minister will take the negotiations with the Palestinians seriously and will not only use it as a delay tactic. As long as US Secretary of State John Kerry is in the picture and the talks continue, Lapid must raise his voice to back the diplomatic process in the government. Like Yachimovich, Lapid, too, erred when he thought he could disconnect his commitment to his economic agenda from his commitment to ending the conflict with the Palestinians. Now, as one who carries the weight of Yesh Atid’s 19 Knesset seats — most of whom back the diplomatic process — he must take on this task.

The public who elected Lapid will no longer be satisfied with hearing him say the right things or seeing him photographed with Kerry. They will demand that he confronts the diplomatic process by creating a new political alliance within the government with Livni, and with their 25 combined seats, to work as a powerful force opposite Netanyahu. This of course depends on Livni as well, who is not so certain to share this role and the credit that comes with it from the center-left public with Lapid, but he has to try. If Livni refuses, he should expose this on his Facebook page and let the public decide. Netanyahu should know that he is working with a built-in coalition ultimatum, facing the political alliance of Lapid and Livni. He has to act with clean hands in the negotiations room, knowing that someone is watching his behavior up close.