Knesset member Binyamin Ben-Eliezer openly says that Israel is better off facing Syria as a state than a shattered country. 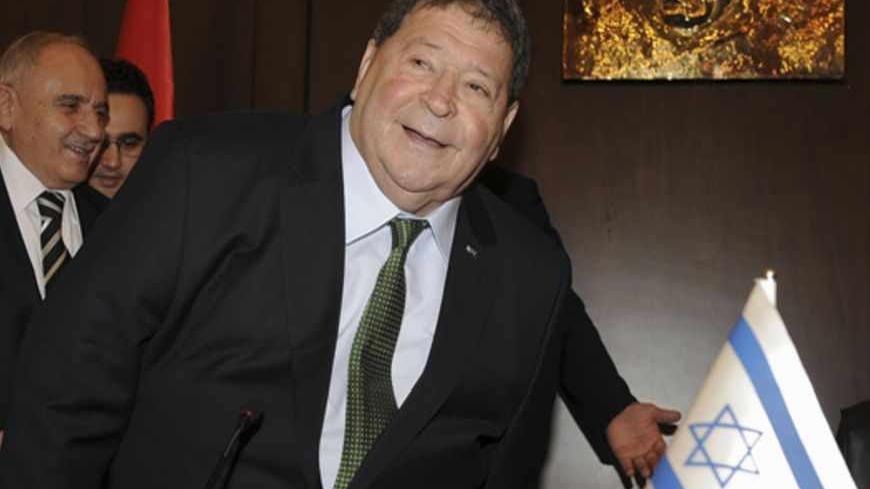 Israel's then Industry and Trade Minister Binyamin Ben-Eliezer is followed by Turkey's Defense Minister Vecdi Gonul (L) as they arrive for a meeting in Ankara, Nov. 24, 2009. - REUTERS

Almost 18 months ago (Dec. 11, 2011), then Defense Minister Ehud Barak predicted that Syrian President Bashar al-Assad’s days in power were numbered and that his situation was dire. Albeit that his assessment, which he kept reiterating, was based on intelligence information, it was also wishful thinking — he believed Assad’s downfall would be a blessing for the Middle East and good news for Israel. His opinion was shared by nearly all of the senior defense echelons in Israel.

But a few days ago, it transpired that an argument has been taking place in defense and political circles between those who continue to espouse Barak’s view and others who feel it would be best if Assad were to retain his seat. An intelligence source quoted by the London Times, on May 17, 2013, put it this way: "Better the devil we know than the demons we can only imagine.”

Prime Minister Benjamin Netanyahu chose to deny the quote. At a meeting of his Likud ministers on Sunday (May 19), he made clear that the words attributed to the intelligence official did not represent the government’s position and that Israel does not interfere in Syria’s civil war.

Former defense minister and Knesset member Binyamin (Fouad) Ben-Eliezer, who serves on the parliamentary External Affairs and Defense Committee, contends that the current situation, with Assad maintaining control, is preferable for Israel. In an interview with Al-Monitor, Ben-Eliezer explains why this is the lesser evil. Ben-Eliezer is expressing his own views, but he is also reflecting the conceptual change that has taken place recently among decision-makers in Israel, at least some of them.

According to Ben-Eliezer, “whether Assad remains in power or not, is not in our hands. We keep hearing intelligence assessments that he is about to go down. In my opinion, the current situation is the best one for us. Do the math: the other option is more chaotic, given that those expected to fill the vacuum are al-Qaeda and the Salafist organizations. It is better to face a state, because not having a clear address is much worse for us. There are almost 400 gangs operating in Syria, so with whom do you talk and who do you hold accountable?”

In your opinion, what is the reason for various reports in recent days of a change in Israel’s position toward Assad?

“There are differences of opinion within Israel, too. There are those who think that it would be good for Bashar [al-Assad] to fall. There’s an argument within the military.”

“Israel is acting wisely in that it contains the occasional incidents of firing in its direction. I believe Israel understands that these shootings do not stem from an official Syrian decision to open fire on us. In my opinion, these are random shootings, whether on the part of the rebels or the part of the Syrian army. On the other hand, as far as nonconventional weapons go or precise long-range weapons — they must not be allowed to fall into the hands of Hezbollah.”

Those are Israel’s red lines?

“If there’s a leak, these weapons’ convoys must be intercepted. There’s no question whatsoever. It’s in our vital interest. We’re following the weapons’ convoys and we know what’s in the warehouses and what’s coming out. Israel regards their crossing of the border into Lebanon as crossing of a line which Israel cannot accept.”

There has been some recent criticism of the fact that the political-defense cabinet is inexperienced. Knesset member Amram Mitzna says it’s a problem …

“That’s nonsense. Those who need to be experienced are the prime minister and the minister of defense. That claim is not serious, because there are enough ministers in the cabinet with previous experience.”

Are you surprised by the ongoing freeze in the diplomatic process with the Palestinians?

“I regret it. I was hoping that following the p roposal of the Qatari prime minister, who expressed support for land swaps based on the 1967 borderlines, Netanyahu would do something. I’m sorry that instead of announcing its willingness to sit down at the negotiating table, as soon as tomorrow morning, the Israeli government comes up with excuses to avoid doing so.”

It appears that the freeze in diplomatic negotiations concerns Ben-Eliezer much more so than the situation in neighboring Syria. “I'm of the opinion that the struggle now is not over the image of the Palestinian state, but over that of the Jewish state. I very much hope that we do not find ourselves all of a sudden in a "one state for two people" situation [bi-national state]. I truly fear that it’s beginning to be too late. In the meantime, we’re only getting further away from a solution. In these days, with the changing arenas around, we’re no longer dealing with battles between tank divisions, but rather with missiles — and we have to talk with whoever is out there.”

So what is the solution?

“The thing is that it all starts and ends with the prime minister. I really hope he will enter the diplomatic process quickly and understand that he cannot ignore the earthquake in the Arab world.”

How relevant is the Labor Party in terms of exerting pressure?

“We’re doing the best we can as an opposition party. These days everyone is busy only with the economic-social issue. Nonetheless, one must understand that it is inherently linked to the diplomatic-defense issue. One needs to realize that one day of fighting costs a billion shekels [roughtly $272 million].”

The one who led the social-economic discourse and neglected the diplomatic issues was the chairwoman of your party, Shelly Yachimovich…

“That’s right, and I’m very glad she has admitted her mistake.”