In an Al-Monitor interview, Peace Now chair Yariv Oppenheimer says the Israeli public must force Netanyahu ''to take a historic step forward" and implement the vision of a two-state solution. 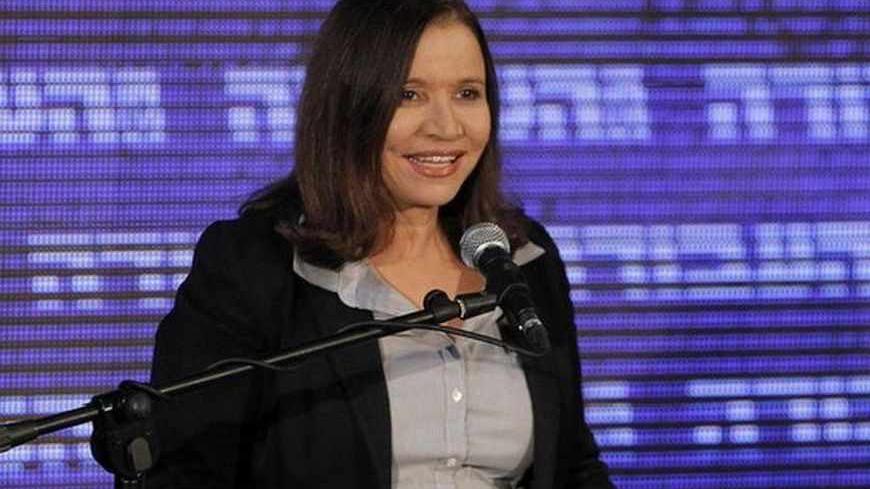 Last week’s official announcements about the renewal of the diplomatic process on July 20 put the chair of Peace Now, Yariv Oppenheimer, into emergency mode. He has spent the past 10 years as head of the veteran, left-wing, extraparliamentary movement. During seven of those years, talks with the Palestinians were either gridlocked or completely frozen.

Oppenheimer is facing a difficult test. He has to lead a campaign to win public support among Israelis for the implementation of a two-state solution. He hopes that Prime Minister Benjamin Netanyahu will be swept up in this wave of support and be prodded to take a historic step forward. And he is organizing this campaign even though the Israeli peace camp has become something of a pariah among some of the leaders of the political center, headed by the Chairwoman of the Labor Party Knesset member Shelly Yachimovich.

Oppenheimer really felt it on his flesh. He ran for a slot on the Labor Party’s Knesset list, only to discover that Yachimovich had blocked him from obtaining a realistic place because he was considered too far to the left. The head of the Labor Party’s greatest concern was that placing him on the list would prevent people on the right from voting for the party, particularly because he had waged a longstanding battle against construction in the settlements. Yachimovich eventually paid a steep price in Knesset seats for abandoning the banner of the diplomatic process. She eventually admitted that she had been wrong. Oppenheimer will neither forget nor forgive.

The chairman of Peace Now has been very busy for the past few days, putting together a public campaign that will present the renewal of negotiations with the Palestinians as the state of Israel’s moment of truth. Are we headed toward becoming a binational state, or will we remain the Jewish state? He believes that the Israeli public is starting to understand the full significance of a binational state. He is therefore putting together a kind of “intimidation campaign” with the message that abandoning the two-state solution means abandoning the idea of a democratic Jewish state for perpetuity.

Al-Monitor:  How can anyone ask for the support of a public, which is tired of all the diplomatic maneuvering, and which is more interested in its economic situation than in anything else?

Oppenheimer:  I am much more optimistic than I was in the recent past. I feel that the public is willing to listen. The last elections proved that. There is a majority among the public and in the Knesset for implementing the vision of a two-state solution. There’s a feeling that once the European Union decided to impose economic sanctions on the settlements, the Israeli public realized that something had happened. The status quo can’t continue. It has created a new energy in the peace camp, which hasn’t been there for years. There’s a will to carry on the struggle.

We’re in campaign mode. We’ll get Netanahu to realize that even if he didn’t intend for it to happen, he has reached the moment of truth. He will have to decide between a binational state and a two-state solution. He has to realize that the public is demanding that he makes history. I don’t think that this will be a personal campaign against Netanyahu, because when push comes to shove, the issue is far bigger than the man. It’s not as if, starting tomorrow morning, the peace camp will start cheering and encouraging Netanyahu. We’re not at that point. The current situation doesn’t have the same feeling as Oslo [the Oslo accords of 1993].

There is, however, a feeling that we have to force Neyanyahu’s hand, and that maybe, without intending it, he brought Israel to historic negotiations.

We want to fight against the sense that sometimes peace negotiations serve as an alibi for our leaders. Our greatest fear is that the talks are being held for the sake of appearances, and that they will end in disappointment and with an escalation of the conflict. This tactic of using meetings with the Palestinians to advance construction in the settlements is our greatest nemesis.

Al-Monitor:  Are you saying that we should thank the European Union for the wakeup call?

Oppenheimer:  I have no doubt that it was one of the moves that contributed to the renewal of the negotiations. I think that all this talk about it happening at a horrible timing is meaningless. Once again, the government proved that the only things that can get it to take action are pressure and force. In general, since the election, we are in a new and far better situation. In contrast to his previous term, Netanyahu must now deal with a Knesset where the majority of members supports a two-state solution. His coalition is stable, and there is a growing realization among the politicians that they will have to decide between a binational state and two states. People are beginning to understand the danger inherent in a binational state, particularly because of the relative quiet in the West Bank.

Al-Monitor:  You are about to complete a decade as the chairman of Peace Now. It looks almost like a Sisyphean task at a time when the peace camp is dwindling.

Oppenheimer:  That’s not the right way to describe it. There were some very fascinating, very successful years. During the struggle over the disengagement [from Gaza, in 2005], the question of where Israel is headed really came into focus. Can it evacuate settlements if it wants to? It has been proven that it is possible to evacuate settlements. That will be important as we head toward the future.

There have been many important struggles. What was lacking was a touch of the romantic. I miss the romanticized feeling among the public. I miss the belief that change is possible, that there is a way to influence our leaders, and that there is a struggle which we can win. Our camp has become skeptical over the past few years. There were too many years of desperation and even more importantly, of a feeling that there is no way to have an impact, that the issues are too big and too complex compared to economic issues like the price of cottage cheese. Over the past few years people have felt that the diplomatic issue has no direct impact on them, that it is old-fashioned and nebulous.

Al-Monitor:  Did the social protests overwhelm the protests on behalf of the diplomatic process?

Oppenheimer:  The protests managed to redirect public attention to internal, socioeconomic affairs, which reinforced the feeling among the public that anything to do with the diplomatic process was too far removed from it. But it only seemed that way, because the decision about the fate of the Territories has to come at some time or another, and when it does come, it will be more intense than it ever was before. No one will remain indifferent to it. It is a formative issue, which raises questions of religious identity, as well as internal, socioeconomic questions. It encompasses so many issues and conflicts. I am sure that the issue will erupt again.

Al-Monitor:  Do you feel like you paid a personal price in the last election because your ideas were not in accord with Shelly Yachimovich’s agenda?

Oppenheimer:  A feeling emerged during the social protests that anyone dealing with issues relating to the diplomatic process was detached from reality. The same thing happened in the Labor Party, but they are correcting that now, at least somewhat. It’s encouraging, but the results of the election proved that this was a mistake and that there is a genuine left, which wants two states. It has found a home in Justice Minister Tzipi Livni’s party HaTenua and in the Meretz party. What we have here is a very interesting development. Shelly didn’t see that coming and missed it. She did not realize that there was a very large public that was ready to give her seniority over Netanyahu.

Al-Monitor:  Are you avoiding the personal issues between you?

Oppenheimer:  No, I am being very forthright and clear about it. I paid a price for my opinions. I feel like Shelly Yachimovich was using me as a tool in her attempt to move to the center. She fired off at anyone and anything who was to the left of her. In my opinion, she committed an ideological crime. She did something that should never be done. She tried to delegitimize those partners who otherwise shared her views, and she suffered electorally for that.

I admit that I feel quite content right now, seeing her raise the banner of the diplomatic process. I am glad to see that the person who tried to make a career out of beating down her ideological allies now realizes that she made a mistake. I paid the price for her tactics. If they hadn’t been directed at me, I would have had a better chance of getting elected to the Knesset. On the other hand, who can guarantee that she won’t make another abrupt rightward turn the next time she sees a poll saying that the right is getting stronger?