Why does Israel sabotage relations with Jordan?

The Israeli government’s irresponsible behavior involving the Bab al-Rahma issue and other matters threatens ties with Jordan and squanders the possibility of working constructively with King Abdullah II. 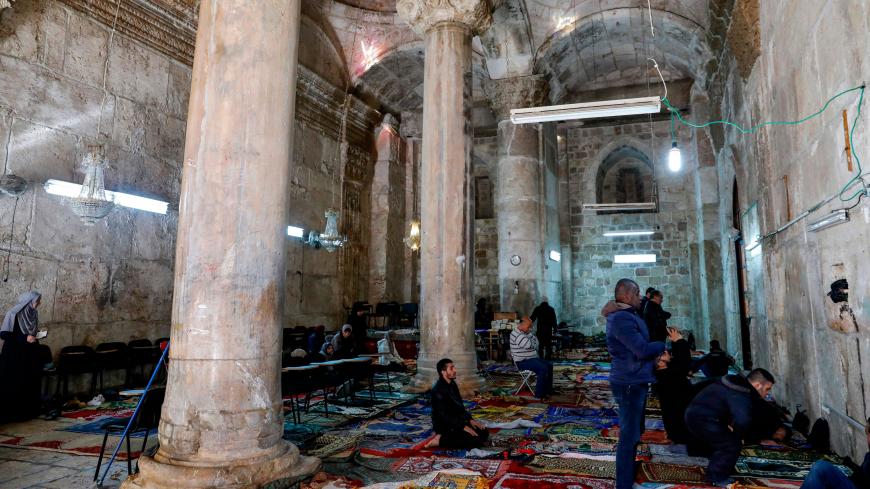 Palestinian Muslims pray at the Golden Gate, also known as the Gate of Mercy, inside the Al-Aqsa Mosque compound in the Old City, Jerusalem, on March 17, 2019. - AHMAD GHARABLI/AFP/Getty Images

The Jordanian parliament is a genuinely legitimate institution in an absolute monarchy. In that sense, it is not very different from parliaments in several other Arab states. They reflect the will of their electorates in some way, engage in heated debate and have quite limited authority. Nevertheless, the Jordanian parliament is not insignificant. Its debates and decisions are covered (if cautiously) by the Jordanian media, and the sovereign must take what happens there into consideration in light of the parliament giving voice to the mood of his people.

When the Jerusalem District Court decided on March 17 to extend the temporary closure order for the Muslim prayer room at the Gate of Mercy (Bab al-Rahma) on the Temple Mount (Haram al-Sharif to Muslims) for another 60 days, a majority of the Jordanian House of Representatives voted to call on the monarch to sever diplomatic relations with Israel and close the country's embassy in Tel Aviv. Nothing more, nothing less.

The legislature referred to the “ongoing Israeli aggression at holy sites in occupied Jerusalem” and Israel's alleged attempts to challenge the status quo at the holy site while also attacking the special status of Jordan as the guardian of the sacred Islamic sites in Jerusalem. The parliament accused Israel of assailing the status of the Islamic Waqf on the Haram al-Sharif. In Israel, news of the parliament’s vote was relegated to the back pages of newspapers.

Meanwhile, the Jordanian government could not ignore the parliament’s demand. In Amman, the Foreign Ministry joined in calls to overturn the closure order, adding that Israel will bear full responsibility for anything that might happen at the site. Yet even this was hardly enough to restore calm. King Abdullah II was also forced to jump into the fray, issuing a statement asserting that a red line had been crossed, that Israel is entirely responsible for tensions with Muslim worshippers and that Jordan has a historic responsibility toward Jerusalem’s Islamic holy sites.

Israel claims that the structure in question had in the past only housed offices belonging to the Waqf and never actually served as a mosque. When Israel learned in 2003 that the offices were being used by Hamas, the site was closed by police order. Muslim activists recently forced it open and turned it into a mosque. It is safe to assume that the Israeli claim is correct, like so many other claims about the Temple Mount in the last few years. It is also reasonable to assume that there are Muslim elements there who want to instigate provocations, create precedents and cause Israel to react in a way that appears to bait innocent worshippers. What is most frustrating is the ease with which the Israeli government falls into these traps.

The incident involving the placement of metal detectors at the entrances to the Haram al-Sharif, after two Border Patrol policemen were killed at the Gate of the Tribes, was some two years ago in July. It has since become an integral part of the Palestinian national narrative. Israel wanted to use the detectors to determine whether Muslim worshippers were armed with guns or knives, but the Muslims saw the equipment as an assault on their dignity, even if it might have expedited their entry to the site. The Waqf announced that its officials would not enter the Haram al-Sharif as long as the metal detectors were in place, and the mufti of Jerusalem, Muhammad Ahmad Hussein, issued a fatwa declaring that all Muslim worshippers should avoid the area until the metal detectors were removed. His ruling was strictly observed.

The result was an especially effective form of non-violent protest, and it became even easier for the Muslim world to identify with the worshippers when Jordan, which is responsible for the Waqf on the Haram al-Sharif, issued a vociferous complaint. The whole affair finally ended when Israel decided that rather than fanning the flames, it would remove the metal detectors. It walked away with its tail between its legs. Muslim worshippers were suddenly empowered.

Another scandal erupted in July 2017, when an Israeli security guard accidentally killed a Jordanian doctor who owned an apartment in which a staff member of the Israeli Embassy in Amman was living. It occurred after the guard fired legitimately at a worker who had stabbed him with a screwdriver. The Jordanians wanted to interrogate the security guard, who had returned to Israel together with the ambassador. Riots erupted outside the embassy after Jordan announced that the ambassador could not return unless the security guard stood trial. Meanwhile, Prime Minister Benjamin Netanyahu invited the guard to his office for a hero’s welcome in front of the media's cameras. This drove the Jordanians crazy.

The way it all ended was entirely foreseeable. Israel apologized for the incident half a year later and promised to pay compensation to the families of the two Jordanians killed. Furthermore, it was agreed that Ambassador Einat Schlein would not return to Amman and would instead be replaced by a new ambassador.

Whenever such incidents occur, Israel claims that it has acted in good faith, without malicious intent. This claim, however, is irrelevant. What really matters is how it all appears.

Israel’s peace treaty with Jordan, signed in 1994, is an important, but fragile asset. Israelis have a neighbor in Amman, King Abdullah, who is actively seeking peace. No one can say that he is not a “partner for peace” as Israeli officials often claim about Palestinian President Mahmoud Abbas. Abdullah encouraged the Arab world to endorse the 2002 Arab Peace Initiative, for which his father had laid the groundwork, leading to its unanimous adoption by the Arab League. So, this is the man who helped bring about the most important diplomatic development between Israel and the Arab world in the last 70 years.

Furthermore, Abdullah has time and again extricated Israel from trouble of its own making in its relationship with Jordan in general and in the context of the Temple Mount in particular. Yet, instead of making a real effort to engage Abdullah in a steady dialogue and be attentive to his concerns and criticisms, and instead of understanding how important it is for him to see progress in talks between Israel and the Palestinians, the Israeli government treats his very presence the same way it treats the peace process itself: He is all the way over there, so there is no reason to engage, advance and express concern, because everything will be readily available as soon as it's needed. What this really means, however, is that Israel is missing an opportunity to engage in dialogue with a neighbor who shares common interests. This could very well put the peace treaty with Jordan at risk.

Nothing can be taken for granted, and nothing is certain if Israel doesn’t deal with it on a steady basis. The Israeli government’s irresponsible behavior in matters involving Jordan has entirely been the result of internal considerations and long neglect of achievements culminated through lots of hard work. It also leaves a troubling legacy for whomever takes over after the next election, regardless of whether it is a government of mainstream and delusional right-wing parties or a government committed to peace.