A proposed Israeli law would ban the use of loudspeakers to amplify calls to prayer in mosques in Jerusalem and within the Green Line. 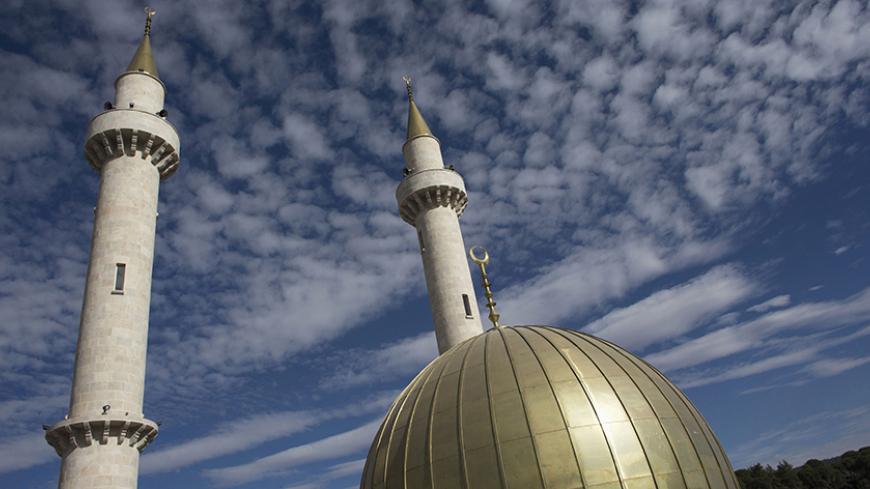 The dome and minarets of a new mosque are seen in the Israeli-Arab village of Abu Ghosh, near Jerusalem, Nov. 22, 2013. - REUTERS/Ronen Zvulun

RAMALLAH, West Bank — The Israeli Ministerial Committee for Legislation has approved a draft law to ban the use of speakers for calls to prayer in mosques in Jerusalem and Arab towns within the Green Line. Kol Israel in Arabic reported that the committee will present the law to the Knesset following hours of deliberation. The committee's statement attached to the decree cited as reasoning that the call to prayer is a form of noise pollution.

Israeli Prime Minister Benjamin Netanyahu voiced his support for the decree at the beginning of the weekly Cabinet meeting Nov. 13, before the ministerial committee approved it. He said he will back the law once it reaches the Knesset, and he would urge all his ministers to do the same, according to Haaretz.

The Israeli Ministerial Committee has successively failed to submit the draft law to the Knesset for voting, as voting on the law was delayed during the Knesset's preliminary reading session Nov. 16, after Health Minister Yaakov Litzman filed an appeal Nov. 15, citing fear that it might affect certain Jewish religious rituals, such as whistling to announce the Sabbath. The voting session was again delayed Nov. 23, and the draft law is expected to be submitted for another voting session Nov. 30.

Meanwhile, Haaretz revealed Nov. 24 that there had been an agreement between Litzman and head of the coalition David Bitan, according to which the draft law will be amended. The use of speakers will be banned between 11 p.m. and 7 a.m. only. For his part, Arab member of the Knesset Ahmad Tibi said in a press statement Nov. 23, “The text of the draft law remains unchanged, although it seems the Israeli prime minister’s office, Health Minister Yaakov Litzman and those supporting the law have previously agreed to announce changing the hours during which calls to prayer can be made.”

Marches and sit-ins in cities in the West Bank, Gaza Strip and inside the Green Line reached their peak Nov. 18, when thousands of Palestinians in Nazareth, Kafr Kanna, Rahat, Kafr Qasim and Tayibe chanted slogans and held banners proclaiming that the law will not be passed or implemented, and that the minarets will not be silenced.

Antoine Shalhat, the director of Madar's "Israeli Scene" supplement distributed with Al-Ayyam, told Al-Monitor, “After the ministerial committee approved the decree, it is likely that the Knesset will do the same, given its far-right stances.”

The draft legislation angered Palestinians, who strongly rejected it. Palestinian Minister of Awqaf and Religious Affairs Yousef Daibes told Al-Monitor, “We absolutely reject this law and we will not respond to it. We will call to prayer all the time every day, everywhere.”

He added, “This law meddles with the [religious] practice of Muslims. If Israel forces it on us, the international community must interfere. This law breaches all international agreements that guarantee the right to practice religious rituals without hindrance or coercion.” The head of the Orthodox Church, Archbishop Sebastia Theodosios, also known as Atallah Hanna, condemned the Israeli law in a Nov. 15 press statement as “a dangerous racist turn that is unacceptable." He wrote that the draft law "is targeting mosques today, and [will] target church bells tomorrow, as [Israelis] are angered at us for staying in this holy city.”

Mahmoud al-Habbash, the Palestinian Authority's (PA) highest Sharia judge and President Mahmoud Abbas’ adviser for religious affairs, told Al-Monitor, “This law is crazy and we will not take it lying down. Calls to prayer will go on in Jerusalem against the odds.”

Habbash said, “If it is implemented, we will not abide by it and we will continue to call to prayer. We will take international political and legal measures.”

PA spokesman Nabil Abu Rudeineh said of the proposed ban Nov. 13, “The Israeli measures will drag the region into the abyss.” He added that such “decisions are completely forbidden, and the PA will turn to the UN Security Council and other international bodies to halt the escalatory Israeli measures.”

Another PA spokesman, Yousef al-Mahmoud, said on behalf of the Palestinian government Nov. 14, “These dangerous measures aim to ruin the normal status quo that reflects the Arab and Islamic character of Jerusalem. They would affect the whole region, which has preserved the right of worship and belief throughout history.”

The ban, if implemented, would allow the Israeli police to interrogate the sheikhs, arrest them and fine them.

Tension over amplified calls to prayer is an ongoing issue. On Nov. 3, Israeli police officers raided three local mosques in the village of Abu Dis, east of Jerusalem, and prevented the sheikhs from making the calls to prayer from them.

Bassam Bahr, who heads a local committee to defend Abu Dis lands, told Al-Monitor that Israeli forces entered the town at dawn and erected a checkpoint near Al-Jamia Mosque. They forbade people from entering and stopped the sheikh from making the call to prayer through the speakers. One officer, he said, told the sheikh that "he does not want to hear calls to prayer ever again.”

Bahr noted that none of the sheikhs let the warning stop them and have not yet faced any legal consequences.

Daibes, the religious affairs minister, confirmed that the incident in Abu Dis happened and said, “Three workers at the Abu Dis mosques were verbally ordered not to use the speakers to make the calls to prayer, but the ministry received no official notice from any Israeli authority.”

Israel is already banning amplified calls to prayer in some Palestinian areas in the West Bank in response to settler complaints. Calls to prayer were prevented in the Sanctuary of Abraham in Hebron, south of the West Bank, 86 times in October, according to the Hebron Awqaf Directorate. The Sanctuary of Abraham is divided into Muslim and Jewish parts, and the prayer room from which the calls are made is located on the Israeli side. Israeli workers often prevent the sheikhs from using their speakers to make the calls to prayer.

Head of the Supreme Islamic Council in Jerusalem Akrama Sabri told Al-Monitor, “Israel wants to bury everything that is Muslim in Jerusalem, including calls to prayer. The sheikhs must commit to their duty to make the calls to prayer in spite of the Israeli law.”

He added, “The Israeli government wants to satisfy the far right and the settlers with this law.”

If the law is implemented, it is likely to spark unrest in the West Bank, especially in Jerusalem, according to Sabri. He said banning calls to prayer is blatantly disrespectful of Palestinians’ religious rituals. The situation is familiar, as on Sept. 28, 2000, when the second intifada broke out after Israeli forces under Prime Minister Ariel Sharon's direction raided Al-Aqsa Mosque. On Oct. 1, 2015, a popular uprising also broke out because of the ongoing settlers’ incursions at Al-Aqsa Mosque and the Israeli government’s inclination to implement a policy of spacial and temporal division.

Habbash said, “Israel is aware that any measure it takes like banning [amplified] calls to prayer will have dangerous ripple effects and might agitate the Palestinian streets. We won’t accept violation of our religious rights.”

The PA is disturbed by the far-right Israeli government's targeting of Muslim religious rituals and shrines. Habbash said, “Israel’s ban on [amplified] calls to prayer constitutes a challenge to the international community, norms and laws. Its insistence on this tactic might make the conflict religious rather than political.”

Abbas has always warned about the risk of Israel turning the political conflict into religious strife. He reiterated his warnings during the Islamic Summit in Istanbul on April 14.

The ministerial committee's discussion on banning amplified calls to prayer came a few days after the UNESCO World Heritage Committee issued a resolution condemning Israel’s illegal excavation activities in the Old City of Jerusalem on Oct. 26. The committee’s use of the term “Haram al-Sharif,” to which Israel objects, pushed the latter to recall its UNESCO ambassador that day in protest.

The PA does not have a plan to deal with the law if passed, and Israel’s implementation of it threatens to aggravate the situation in Palestine yet again.