Why Jordan is installing cameras at Al-Aqsa Mosque

Jordan’s plan to install surveillance cameras at the Al-Aqsa Mosque compound is raising controversy among Palestinians, as some believe Israel will take advantage of the cameras to further attack and pursue those defending the mosque's grounds. 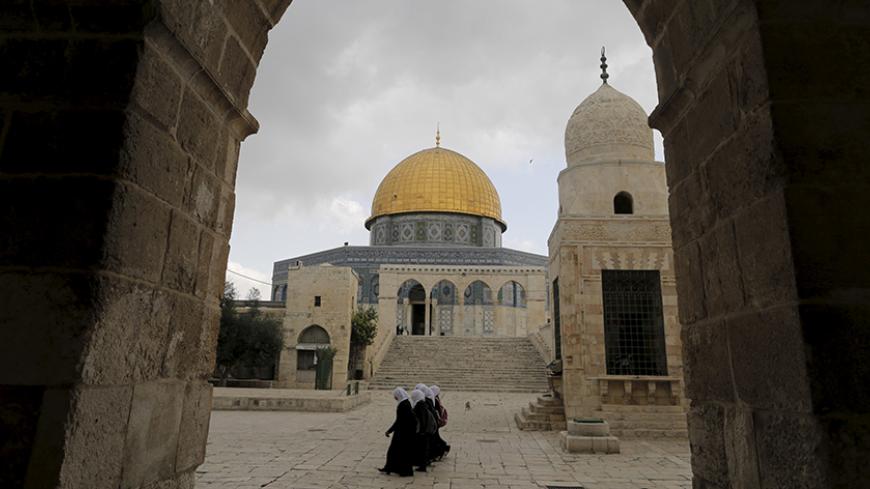 People walk near the Dome of the Rock in the Al-Aqsa Mosque compound in Jerusalem's Old City, Oct. 26, 2015. - REUTERS/Ammar Awad

RAMALLAH, West Bank — Jordan is making progress installing cameras in Al-Aqsa Mosque's courtyards, but has not set a completion date for the controversial project. The plan faces tough challenges, and some Palestinians fear Israel could use the cameras against them.

Some Palestinians believe extremist Israelis are trying to gain control over the mosque, one of Islam's holiest sites. Jews are permitted to visit the mosque compound, but are not allowed to pray there. Jewish groups, sometimes accompanied by Israeli police, frequently force their way into the mosque compound, resulting in violent confrontations.

Ahmed Rwaidy, Palestinian President Mahmoud Abbas' adviser on Jerusalem affairs, told Al-Monitor that the 55 cameras will be installed in areas that settlers raid to perform the Torah and the Talmud prayers. The recordings will be used as documentation against Israel in international forums, Rwaidy said.

Jordan holds the right of guardianship over all the buildings on the 35-acre Al-Aqsa Mosque grounds, including Al-Qibli Chapel, Solomon’s Stables and the Dome of the Rock. Jordan represents the interests and legal affairs of the holy places internationally. It also oversees and manages the Jerusalem Endowment and its properties.

Jordanian Deputy Prime Minister and Minister of Foreign Affairs Nasser Judeh met March 24 with Abbas in Ramallah. During the meeting, Abbas said he agrees with everything Jordan decides regarding Al-Aqsa Mosque, including the installation of cameras.

On the sidelines of the meeting, Judeh said the camera installation “is a Jordanian initiative that aims at revealing any violations or desecration of holy places. Jordan chose the cameras [to be installed], and Abbas reiterated his support for this initiative. We are holding on to these measures to protect Al-Aqsa and the believers.”

On March 20, the Jordanian Ministry of Awqaf announced it was purchasing cameras that were tested by specialists and engineers. The installation process will be monitored by Jordanian specialists, now that the ministry has completed technical studies, as well as the infrastructure phase, including electrical wiring.

Jordan decided to install the cameras in the wake of an October agreement between Jordan and Israel under the auspices of US Secretary of State John Kerry.

Kamal al-Khatib, deputy head of the Islamic Movement in the 1948 occupied territories, told Al-Monitor, “We do not doubt the Jordanian intentions, but we think that these cameras will help Israel watch believers who deter the settlers’ incursions into Al-Aqsa mosque [compound].”

He added, “Internet networks in Jerusalem are connected to the Israeli communication networks, and Israel’s security system is capable of unlocking the cameras and watching what is on them, thanks to Israel’s advanced techniques. This would allow the latter to observe the defenders and believers at Al-Aqsa.”

Hassan Khater, head of the Jerusalem International Center and former director of the Islamic-Christian Commission For the Support of Jerusalem and Holy Sites, told Al-Monitor that Jerusalem’s Palestinian citizens reject the camera installation because of their bad experiences in the past. Israel occasionally installed cameras in the streets and alleys of the Old City area of Jerusalem and used them to pursue the inhabitants, arrest them and expel them from the city, he said.

“Although the cameras [can be] beneficial, their disadvantages outweigh their advantages, especially in terms of security and pursuit of believers,” he said. The camera installation will have serious repercussions, as it will facilitate Israeli settlers' raids and lead to the pursuit of Al-Aqsa frequenters who try to deter them, he said.

The October agreement calls for cameras to be installed in Al-Aqsa’s courtyards only. Technical problems delayed the project, but it has become more pressing, Jordanian government spokesman Mohammad al-Momani said March 16. Because settlers repeatedly raid the Al-Aqsa compound and subsequently clash with Palestinians, according to Momani, the cameras are needed to document the armed incursions and refute Israel’s claims that Palestinians are responsible for the Israelis' meddling in Al-Aqsa Mosque affairs.

Jordan’s Ministry of Awqaf (Charity) is overseeing the camera project without coordinating with its Palestinian counterpart. Palestinian Minister of Awqaf Youssef Dais told Al-Monitor, “My ministry had no knowledge of this project. ... This is a Jordanian affair that we know nothing about due to Jordan’s guardianship over Al-Aqsa Mosque.”

Regarding the advantages and disadvantages of the cameras, Dais said, “The project cannot be judged as long as it has not been implemented, and we do not know how to manage it yet.”

Mahmoud al-Habbash, Abbas’ religious affairs adviser, told Al-Monitor, “We do not doubt the good intentions of Jordan in installing cameras to watch Israeli breaches, but we are concerned about Israel’s motives, as it might use the cameras to harm Al-Aqsa believers, defenders or the mosque itself.”

He noted, “We are afraid that Israel might unlock the cameras and use them to pursue Al-Aqsa Mosque believers and defenders or to impose a certain situation there, as we refuse any Israeli intervention in the mosque. If such intervention happens, Jordan will have to remove the cameras."

Rwaidy said, “As long as Jordan is in charge of Al-Aqsa’s guardianship, it can choose whichever way to protect it. Cameras are a method to document Israel’s breaches and show them to all Muslims across the world.”

A delegation consisting of Jerusalem's Awqaf and religious clerics had met Nov. 4 with Jordan’s King Abdullah II in Amman to discuss the king’s concerns and reservations regarding the camera project. The delegation listened to the king explain Jordan’s efforts to protect the sanctities.

Rwaidy noted, “Jordan vowed not to allow the use of cameras to harm Al-Aqsa defenders and to monitor everything happening at the mosque [compound], including Israeli violations.”