Tensions are simmering over the Israeli prime minister's action to lift the ban on Knesset members visiting the Al-Aqsa Mosque compound. 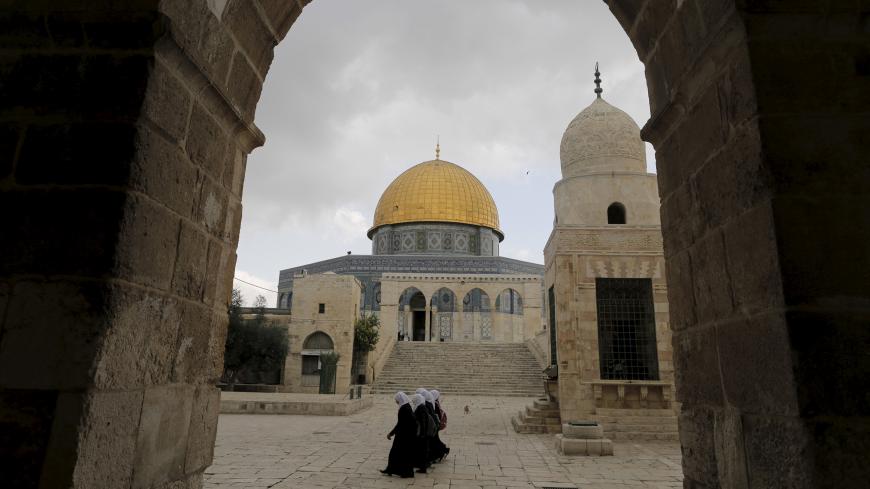 People walk near the Al-Aqsa Mosque, on the compound known to Muslims as the Noble Sanctuary and to Jews as Temple Mount in Jerusalem's Old City, Oct. 26, 2015. - REUTERS/Ammar Awad

Christians, Jews and Muslims all consider the Jerusalem compound holy for their own reasons.

Netanyahu's July 3 decision, which threatens to escalate tensions in the region, comes less than two years after he banned Israeli parliamentarians and ministers from entering Al-Aqsa Mosque because of the deteriorating security situation in the Palestinian territories and Jerusalem.

From late 2015 until 2017, Palestinians carried out individual attacks against Israeli settlers and soldiers using guns, knives and vehicles. Palestinians said they were reacting to ongoing raids on the mosque by Israeli police and settlers.

Israeli Minister of Agriculture and Rural Development Uri Ariel was the first Israeli to implement the decision July 8. Three other Knesset members, headed by Yehuda Glick of the ruling Likud party, followed July 9.

Speaking to Al-Monitor, Palestinian consensus government spokesman Youssef al-Mahmoud warned that the continuing visits of Israeli Knesset members and officials to Al-Aqsa compound might bring tensions to a boiling point in Palestinian territories and the Middle East.

He said the Palestinian government and presidency constantly communicate with officials from Arab and Islamic states to fill them in on what's happening at the mosque. He called on governments of these states to take more action to halt Israeli extremists' attacks on Al-Aqsa and Jerusalem.

Meanwhile, the Islamic Awqaf and Al-Aqsa Affairs Department, affiliated with the Jordanian Ministry of Awqaf (Religious Endowments), rejected in a July 4 statement Netanyahu’s decision, just as it has rejected other Israeli government decisions regarding Al-Aqsa since 1967. The department called on international bodies to directly intervene, halt the Israeli government’s measures regarding the mosque and bind Israel to international laws and decisions — especially those issued by UNESCO.

On Oct. 13, 2016, UNESCO passed a resolution on "Occupied Palestine" that many argued considered Al-Aqsa Mosque in Jerusalem to be purely of Islamic heritage. The resolution referred to sites in Jerusalem's Old City by only their Islamic and English names, without mentioning their importance to Israelis or Hebrew terminology. Just days before, UNESCO had issued a statement denying any historical Jewish ties to the Western Wall. These decisions, among previous ones, angered Israel, which in response withdrew from UNESCO in October 2017.

Al-Aqsa Mosque compound sits on about 35 acres, perched high on a hill in the southeast of Jerusalem’s Old City. Jews call it the Temple Mount and claim the mosque was built on the ruins of Solomon’s Temple.

Yahya Moussa, the deputy head of Hamas’ parliamentary bloc at the Palestinian Legislative Council, claimed the only option for the Palestinian people and their political parties is to deter the Israeli government from its decision using all peaceful and military means available. He considers the decision “dangerous and provocative."

Moussa called on Palestinian inhabitants of Jerusalem and the West Bank who can reach Al-Aqsa to visit it and dwell there, to deter the attempts of Israeli officials and Knesset members to enter.

Ahmad al-Mudallal, a Palestinian Islamic Jihad leader in Gaza, told Al-Monitor that Netanyahu's decision will provoke a new wave of confrontations between Palestinians and Israelis. He noted that the Israeli government is pushing for the temporal and spatial division of Al-Aqsa Mosque.

Mudallal called on Arab and Islamic nations to support the Palestinian people in the face of “Israeli plots” to obliterate all religious Islamic and Christian landmarks from Jerusalem, and he urged them to help stop Israeli settlers’ raids.

Imad Ghayathah, a political science professor at Birzeit University, told Al-Monitor that Netanyahu is allowing Knesset members to enter Al-Aqsa Mosque to distract from his crises at home. Netanyahu is involved in corruption issues that threaten to disintegrate his governmental coalition.

Ghayathah said Palestinians have grown used to the Israeli government's habit of solving internal problems at the expense of Palestinians, especially as the Israeli parliamentary elections are due at the end of 2019. In recent decades, he said, Israeli politicians have been expediting construction of Israeli settlements in the West Bank, Judaizing Jerusalem and waging wars against the Gaza Strip to gain support from the Israeli public and gather more electoral voices.

Talal Okal, a political analyst and a writer for the Palestinian Al-Ayyam newspaper, sees a connection. Okal said Trump's strident support for Israel emboldened Netanyahu to take escalatory steps against Islamic and even Christian holy sites. Along those lines, the Israeli municipality imposed taxes on Jerusalem churches in early February.

Okal told Al-Monitor the Israeli government is willing to pay any price to continue allowing Knesset members into Al-Aqsa Mosque, amid Israel's attempts to entrench its plans for Jerusalem in general and Al-Aqsa in particular.

On May 13, 1,620 Israeli Jews entered Al-Aqsa compound, the most in one day since Israel occupied the eastern side of Jerusalem in 1967.

Amid official Palestinian and Arab inability to keep Israeli Jews and Knesset members out of the compound, Palestinians are calling on the international community to protect them and their holy sites.