Israeli politics is no longer divided between right and left with a pragmatic center in between as Benjamin Netanyahu rewrites the rules of the game. 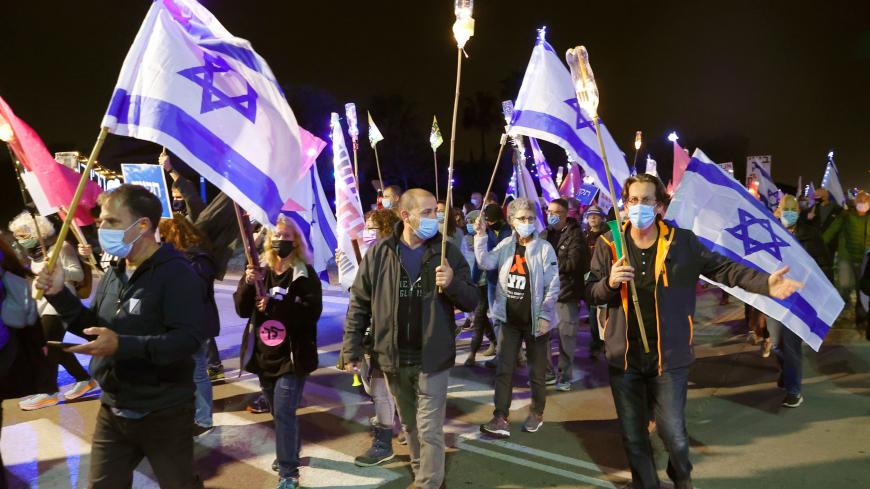 Israeli protesters gather with national flags during a protest against Israeli Prime Minister Benjamin Netanyahu near his private home in the coastal town of Caesarea in northern Israel, on Dec. 12, 2020. - JACK GUEZ/AFP via Getty Images

Imagine that rather than the Eastern and Western conference champions facing off at the NBA finals, three or four groups from each side crowd into the court, jostling each other for space, and instead of playing basketball engage in a free for all melee egged on from the bleachers. This, more or less, is a current snapshot of Israel’s political arena, just over 11 weeks before a fourth round of elections is scheduled for March 23.

In the evening hours of Dec. 29, timed to coincide with prime time television news, Tel Aviv Mayor Ron Huldai announced he was forming a new political party. The decorated former fighter pilot and war hero appeared in front of the cameras alongside Justice Minister Avi Nissenkorn, who just minutes earlier had quit the crumbling Blue and White Party led by Defense Minister Benny Gantz. Last week, Knesset member Ofer Shelah announced he was forming a new party after quitting Yair Lapid’s Yesh Atid party. Earlier today Foreign Minister Gabi Ashkenazi said he will not run again within Blue and White and that he is taking some time off from politics, perhaps to consider a new political framework.

Gantz, who still leads the remains of the Blue and White, delivered his own public address shortly before Huldai, claiming that “Blue and White saved the state” by joining Prime Minister Benjamin Netanyahu’s government in May and insisting that he will run in March, too. The leftist Meretz, led by Knesset member Nitzan Horowitz, is running on a separate ticket. Two other former army chiefs have yet to announce their plans — former Prime Minister Ehud Barak, considered one of the driving forces behind the ongoing anti-Netanyahu protests, and Lt. Gen. (res.) Gadi Eizenkot, who shed his uniform two years ago and is being courted by several parties but is said to be undecided as yet.

This is the first times in ages that Israel’s center-left political bloc is mounting a real challenge to the right. The right is currently fielding four separate tickets (Netanyahu’s Likud, Avigdor Liberman’s Yisrael Beitenu, Naftali Bennett’s Yamina and Gideon Saar’s already popular “New Hope”), and the center-left is also splitting up at a dizzying pace rather than uniting.

Right now, the center-left bloc consists of the centrist Yesh Atid, Meretz, Huldai-Nissenkorn, Ofer Shelah, Labor on life support and the dying Blue and White. However, this constellation is an illusion, a fata morgana in the political desert. The boundaries defining Israel’s political map have long faded. It is no longer divided between right and left with a pragmatic center in between. The framework that defined Israeli politics has been shattered and there is only one issue: for or against Netanyahu. The traditional right is evenly split between the two camps, whereas the center-left is trying to find itself. The rapid disintegration we are witnessing on the center-left will become a series of new mergers and acquisitions. Ofer Shelah will not run alone. The prospects of Blue and White running separately are slim. There is talk of a union between Meretz and Huldai or even Lapid and Huldai. Ultimately, this side of the arena will also tap into its survival instincts.

There is another major change happening in Israeli politics. Since its founding, the state’s security agencies, especially the IDF, have been both a social melting pot and an assembly line of Israel’s political leadership. Two former IDF chiefs became prime ministers and dozens of other commanders and generals traded in their uniforms for suits and ties, providing a natural leadership pool for top government posts.

For years, the unwritten rule for all prime ministers has been “never fight with your IDF chief of staff," born of the perception that Israelis admire and even worship those who lead the people’s army. The defense minister’s position, with its combat trappings, was also viewed as a springboard to the prime minister’s office.

But the brand of the IDF chief has lost its sheen. Former IDF chief Dan Halutz says he has stopped citing his one-time post, preferring to present himself as a former air force chief, a position that still holds a certain untarnished cachet. Former IDF chief Gantz is being ignominiously kicked out of politics at this very moment, his former political ally and predecessor Ashkenazi is barricading himself behind a wall of silence, former IDF chief and Defense Minister Moshe Ya’alon is considered a dead political horse and Eizenkot has decided to stay out of politics after watching his former colleagues crash.

This turn of events is the work of Netanyahu. As a young politician, Netanyahu surrounded himself with generals in order to bask in their glow. Chief among them was Maj. Gen. (res.) Yitzhak Mordechai, a former front commander and defense minister. Those days are long gone. Netanyahu has successfully made himself “Mr. Security,” the irreplaceable guardian of the Jewish State. He no longer needs former generals and security officials. On the contrary, he is methodically ensuring their political elimination.

In the upcoming elections, the fourth in less than two years, Netanyahu will face no threat from former military candidates. Three times he has vanquished the generals who tried to unseat him. While they did deprive him of immunity from criminal prosecution and defended the country’s law enforcement and court system, they failed to defeat him. This time, Netanyahu will face experienced politicians just as cruel as he is, some such as Saar with intimate knowledge of his ways.