With Prime Minister Benjamin Netanyahu falling in the polls and facing public discontent, Yamina leader Naftali Bennett is more popular than ever. 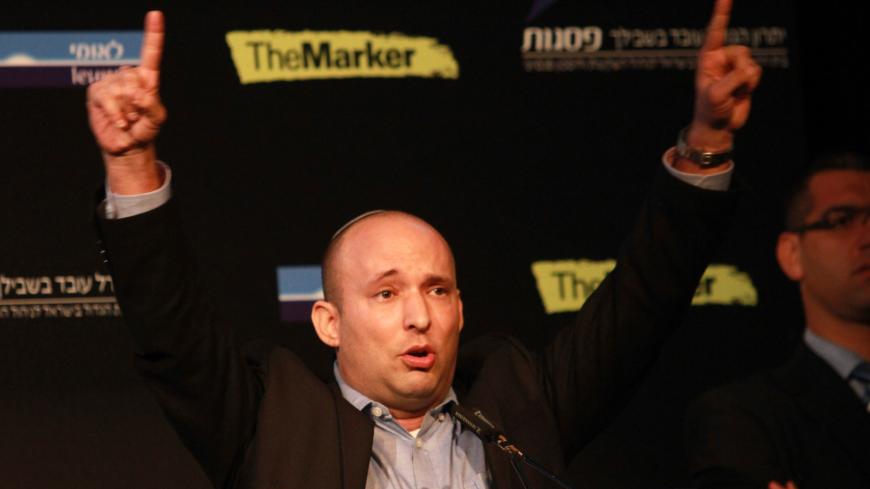 Head of the far-right Jewish Home Party Naftali Bennett gestures as he gives a speech during a debate on the economy on March 11, 2015, in the costal Israeli city of Tel Aviv. - GIL COHEN MAGEN/AFP via Getty Images

Yamina leader Naftali Bennett is showing signs that he intends to run for prime minister in the next elections. His associates are also spreading hints. They say that when the next elections take place, Bennett might actually recommend someone other than Prime Minister Benjamin Netanyahu to compose the new government.

Of course, things might look different when elections are actually held, as Bennett's electorate has always been loyal to Netanyahu. Still, these developments indicate that Bennett is getting more confident of his own popularity.

When Netanyahu composed his current government last April, he left out right-wing, pro-settler Yamina. But combined with the COVID-19 crisis, Netanyahu’s decision has turned out to be an unintentional gift to Bennett.

Bennett served as defense minister in Netanyahu’s last government (November 2019 until April 2020). But ever since the defense portfolio was transferred to Blue and White leader Benny Gantz, Bennett's popularity has been rising. Meanwhile, Netanyahu has been losing ground in public opinion polls due to what is perceived as his failure in managing the COVID-19 crisis. The Likud’s lost polling numbers have shifted to Bennett, who  garnered public sympathy for his own COVID-19 actions as defense minister.

Bennett is not only enjoying a surge in the polls, but has positioned himself as a possible leader for the right, thus sidelining senior Likud ministers.

The latest polls predict 14-15 seats for Yamina under Bennett, up from its current five. The Likud is on a sharp downward trend and its strength is estimated at only 31-34 seats (in contrast to its current 36).

The current conventional wisdom holds that Netanyahu intends to move the next elections up to November 2020, and Bennett is becoming the biggest player on the electoral battlefield. According to current polls, Netanyahu won’t be able to cobble together a majority coalition without Bennett. That means that in future negotiations, Bennett will able to demand any role he wants — even a rotation for the premiership.

Bennett is now preparing for early elections and is seeking support from the wider public. Some two weeks ago he shrewdly founded an apolitical and all-inclusive volunteer movement with one goal: beating the coronavirus.

Bennett has been successful in uncovering the weaknesses of Netanyahu and his government. On July 23, after weeks of deliberations and delays, Netanyahu nominated Ichilov Hospital chief Ronni Gamzu as coronavirus project coordinator. Bennett gave his blessing to the choice but also expressed criticism: “It is unfortunate that this [appointment] did not take place four months ago; [the delay] destroyed the lives of a million citizens. Evidently this was because Benjamin Netanyahu was worried that Bennett will succeed in eradicating COVID-19 too fast. Words cannot express the severity of this debacle. It is a leadership fiasco with the dimensions of the 1973 Yom Kippur War leadership failure in our health system.”

Bennett was referring to all his suggestions for dealing with the COVID-19 threat being pushed aside by Netanyahu, and now Gamzu has adopted a large percentage of Bennett’s recommendations. Bennett's Yom Kippur War analogy constitutes a very harsh accusation against a leader who refuses to take action in the face of catastrophe.

In interviews to the media, Bennett said that he had tried to arrange a meeting with Netanyahu last month to raise his suggestions regarding the COVID-19 war, but that Netanyahu refused to meet with him. Thus, Bennett has made himself a media sweetheart while criticism and attacks on Netanyahu have escalated, and it is clear that the prime minister is indeed ignoring Bennett.

How has someone ejected from the Knesset in the April 2019 elections made such a comeback? How has Bennett become such a popular figure on the right in such a short time?

Perhaps the answer can be traced to the complex and stormy relationship between the two men. It begun when Bennett served as chief of Netanyahu’s staff in 2006, when Netanyahu was chairman of the opposition. Bennett, then a 33-year-old tech millionaire, admired Netanyahu at the beginning. Netanyahu and his wife Sara recruited the religious, ideologically right-wing Bennett as part of a team to lead Netanyahu to the premiership. Two years later, the relationship ended explosively.

Bennett did not accompany Netanyahu to the prime minister’s office after a harsh falling out with Sara. Immediately after his firing, Netanyahu also fired his office director Ayelet Shaked, a close Bennett ally.

Netanyahu likely assumed that this would be the end of his relationship with the two anonymous young people, but fate had other plans. Bennett and Shaked continued to be active through right-wing nonprofits and social media. Netanyahu prevented them from running for a place on the Likud list for the 2012 Knesset. At that point, Bennett and Shaked took over the failing HaBayit HaYehudi and amazingly, garnered 12 Knesset seats.

Netanyahu had tried to keep them outside his coalition government but was ultimately forced to let them in. Such has been the pattern ever since, with great enmity on the part of Netanyahu and his wife, and now their son Yair, toward Bennett and Shaked. In the April 2019 elections, it had seemed that Bennett had reached the end of his political life when his party did not pass the vote threshold. Netanyahu hurried to fire him and Shaked from the Education and Justice Ministries, respectively. It was a harsh blow for Bennett, but he had learned from his years with Netanyahu never to give up, even when it seems impossible, and once again reinvented himself.

Is Netanyahu worried? He is definitely concerned about Bennett giving him trouble after the next elections, but realizes that Bennett’s power is limited. Netanyahu has proven capable of winning back voters from Bennett and he can be confident that his voters remain in the right  and won’t defect to the other side. Netanyahu also knows that if Bennett wants to succeed him as the right's leader, his rival must remain loyal to his political base: Bennett cannot be the one to prevent the right from cobbling together a government, so now all that remains to be seen is if COVID-19 can change that equilibrium.