No clear winner: Israel could be in for fifth election

The day after voting, the political deadlock in Israel persists, with neither Prime Minister Benjamin Netanyahu nor the bloc opposing him empowered to compose a government. 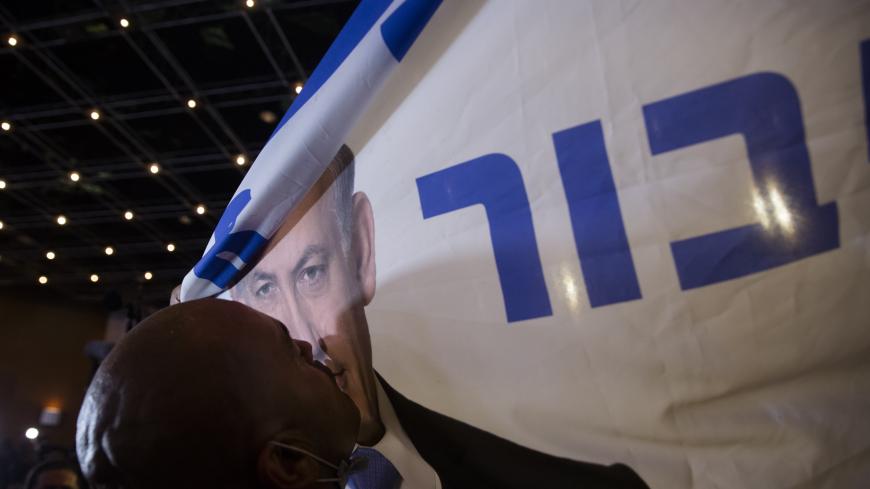 A Likud supporter kisses a flag with a photo of Israeli Prime Minister Benjamin Netanyahu after the voting on March 23, 2021, in Jerusalem, Israel. - Amir Levy/Getty Images

Prime Minister Benjamin Netanyahu was hoping for a decisive victory in yesterday’s election, but he did not get it. After the fourth election in just two years, Israeli society is as divided as ever. In the likely final results, Netanyahu will be two seats short of forming a homogeneous right-ultra-Orthodox coalition. Together with his religious and ultra-Orthodox partners, the Likud can only assemble a 59-Knesset seat bloc.

His opponents on the center-left have no way to form a government either. If nothing major changes when the final vote count is over (expected on Friday morning, March 26), and assuming that none of the opposition parties break their promise not to join a Netanyahu coalition, Israel is headed for yet another election, its fifth in under two and half years. Netanyahu will remain in power until then, but he will be on shaky ground.

Nothing drastic will happen right away. Attempts will be made to form a workable government before a new election is called. There will be coalition wheeling and dealing, but it's clear to everyone involved that neither side can form a government.

In practical terms, a divided transition government with Blue and White chair Benny Gantz will continue to run the country for the next few months as Israel plunges into another election round.

The political and constitutional crisis that Israel has faced over the past two years has only gotten worse. It seems that all the efforts and maneuvering to remove Netanyahu from the prime minister’s office are dividing the Israeli electorate and dismantling the political system. The Likud is still the largest party by a considerable margin over its rivals. It has 30-31 seats, while Yair Lapid’s Yesh Atid, once again the second largest, has just 17. All the other parties have five to nine seats.

Surely one of the most disappointed is New Hope chair Gideon Saar. He quit the Likud to challenge Netanyahu from the right. His party crashed over the last few days and seems to have won just six seats. Another disappointed candidate from the right is Naftali Bennett, whose Yamina dropped dramatically in the polls in the last few months from 23 seats to just seven.

Saar and Bennett's failures bolster Netanyahu's position as the only real leader of the right. Now neither of his two right-wing opponents can make another credible bid for his office. Netanyahu can now enjoy a quiet period within his camp, unchallenged from the right in general and from within the Likud in particular.

Netanyahu may not be able to form a new government, but once again, he has succeeded in blocking efforts to bring him down and will be better positioned to run in a fifth election. The center-left camp lacks a leader, and he has no rivals challenging him on the right.

As always, Netanyahu was quick to untangle the political situation and his own standing within it. Hhe took the podium very early this morning to address his supporters in the Jerusalem Convention Center and used the opportunity to launch his next campaign. He did not deliver a victory speech, nor did he concede defeat, treating the next round is though it has already begun.

He had two main messages. He called on candidates who quit the Likud, including Saar and his faction, to come home, and announced that unlike the other parties, he will not block any party from joining his coalition. He claimed he is willing to do whatever is necessary to avoid a fifth round of elections.

He was really saying that he will not be held responsible for a fifth election. The blame lies with all the other parties that refuse to form a coalition with the large block of voters that he represents.

He said, “It is the demand of the day. The country needs a stable government, not a tattered coalition based on boycotts and personal ambition. The challenges we face demand this of us. Under no circumstances can we drag Israel into a fifth round of elections. We must form a stable government now!”

Netanyahu looked exhausted after several weeks of intense campaigning, including on election day itself, when he headed to the beach and to malls, encouraging people to vote and making hundreds of phone calls.

Some candidates did better than expected, such as Gantz. After a steady drop in the polls, he walked away with a surprising recovery, winning eight seats. All the parties in the center-left bloc passed the electoral threshold, the only major achievement of a bloc that headed into the election without rallying around a single leader who could challenge Netanyahu.

Despite splitting from the Joint List, Ra’am head Knesset member Mansour Abbas appears to have passed the electoral threshold with four to five seats. So far, Abbas has not ruled out the possibility of cooperating with Netanyahu or anyone else. Parties on the right, including Netanyahu himself, have said that they would not rely on his support to form a coalition. But Netanyahu’s opponents would have a hard time collaborating with him, given that the head of Yisrael Beitenu, Knesset member Avigdor Liberman, is adamantly opposed to the prospect.

The next few months in Israel promise to be turbulent and historic. Netanyahu’s trial will resume, reaching its climax as key witnesses give their testimony while coalition negotiations are underway. The trial will certainly feature at the center of the next election campaign, but it may not work to Netanyahu’s detriment. His supporters on the right continue to believe that he is the victim of persecution by the legal system and leftist elites.

Rebuilding the economy and the state's budget deficit, the implications of which can be seen in the growing unemployment rate, will also be at the top of Israel’s agenda.

So what about Netanyahu? As someone who is used to seeing things as an eternal struggle against a steady succession of challengers, he is ready to face yet another battle. But Israeli voters, including his most ardent supporters, are tired. They could well get fed up with him after two grueling years, in the shadow of the coronavirus and the ongoing social struggles.