Having long prepared for the job, Yair Lapid quickly took on the role of Israel’s prime minister. 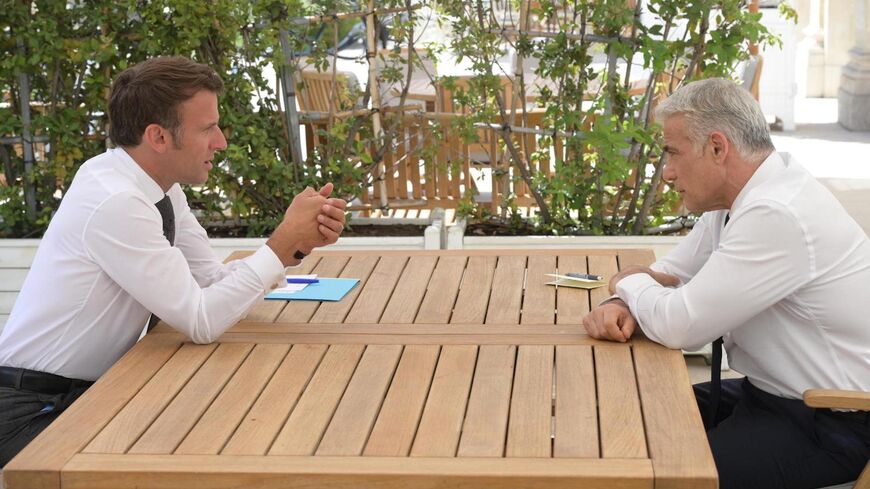 To Lapid, who is also Israel's foreign minister, it is important that his first official visit abroad as prime minister be to President Emmanuel Macron for two reasons. One is that the French president is the Western leader closest to Lapid and the two have close ties, in direct communication via WhatsApp. The second is that they are both heads of centrist parties. Lapid wants to bolster his reputation as a centrist and expand his voter base with a new election just months away.

The photo of his July 5 visit to the Elysee Palace that Lapid posted to Twitter shows the French president and the Israeli premier sitting across from each other at a garden table, casual with their jackets off.

Everything Lapid does, every move and statement, is planned meticulously. During an election season, the slightest mistake could cost him voters.

When reporters in Paris asked him whether he plans to meet with Palestinian President Mahmoud Abbas, he answered diplomatically that for now, there are no plans for such a meeting. “I do not have meetings for the sake of meetings unless they have a positive result for Israel. At the moment it is not on the agenda, but I do not rule it out,” said Lapid.

His cautious response stemmed from his strict campaign discipline. His potential coalition partners on the right, particularly New Hope leader Gideon Saar, would have felt uncomfortable had he announced that he would meet Abbas soon. On the other hand, if he had rejected the idea out of hand, he would have upset his leftist partners in Meretz and the Labor Party, both of which see the renewal of negotiations with the Palestinians as an important part of their mission and agenda.

Lapid’s visit to Paris was brief at less than a day. He left Israel in the morning and was already home that night. Over the coming days, he will continue to prepare for US President Joe Biden's Israel visit, which will draw more international attention to him. Lapid needs such top-level summits if he is to overcome his public image as inexperienced in this area, especially when compared to his political rival former Prime Minister Benjamin Netanyahu, who has years of experience in the international arena. If assessments prove true and Biden brings a message of progress in the normalization of relations with Saudi Arabia, it would be an enormous boost to Lapid’s campaign.

So far, Lapid has had a smooth landing in his new position. It is very apparent that he prepared well and learned from the mistakes of his predecessor Naftali Bennett. Unlike Bennett, Lapid moved into the official residence in Jerusalem just one day after taking office.

In contrast, Bennett came under sharp criticism for not moving to Jerusalem and for turning his private home in Ra’anana into his official residence with a very expensive renovation. When the public found out about it, he explained that the prime minister’s official residence in Jerusalem, where Netanyahu lived for years, need major renovations, too, so he continued living in his own home. In contrast, Lapid’s rapid move to Jerusalem allowed Lapid to present himself as a man of more modest tastes who is attentive to what the people want.

The same is true of Lapid’s immediate workspace. He made an east transition into his new office, whereas Bennett was abandoned by some of his key people in his last few weeks in office. Upon taking over as prime minister, Lapid brought his entire team of advisers and confidants, who quickly found their place in their new offices and got to work if they had been there for years.

One of the first things that Lapid did upon entering office was to invite opposition leader Benjamin Netanyahu for a security briefing. It was more than just a courtesy. The law requires the leader of the opposition to be informed of sensitive security issues. However, when Bennett was in office, Netanyahu refused to meet with him because he didn’t want to be seen meeting with the person who took over from him.

Netanyahu is a sly campaigner and avoid Lapid’s invitation as well, claiming that during an election campaign, it is preferable for him to receive the briefing from the prime minister’s military secretary. That way, no one could take advantage of the meeting for campaign purposes. He certainly will not allow a photo of himself being briefed by Lapid to play in the prime minister's favor.

Lapid has another advantage in this election as an interim prime minister, meaning that the Knesset has been dissolved and is no longer active, which makes his job easier. He does not have to rely on the Knesset and so is not disadvantaged by not having a parliamentary majority.

Lapid can run the perfect campaign from the prime minister’s office. He can travel overseas on diplomatic missions or host foreign leaders, visit army bases and take the kind of photos with soldiers that speak to the Israeli public. He can control the agenda, call press conferences or deliver speeches in prime time, as he did last Saturday night upon entering office, when he delivered a speech calling for unity.

And yet, Lapid still needs calm in the country. After all, security concerns are the most influential factor in Israeli elections. And Lapid is running against “Mr. Security” himself, a man who can exploit even the most minor security issue as evidence that only he is fit for office.