Newly seated Prime Minister Yair Lapid has only four months to make a name for himself before the Nov. 1 elections in Israel, and opposition head is sure to make it as difficult as possible. 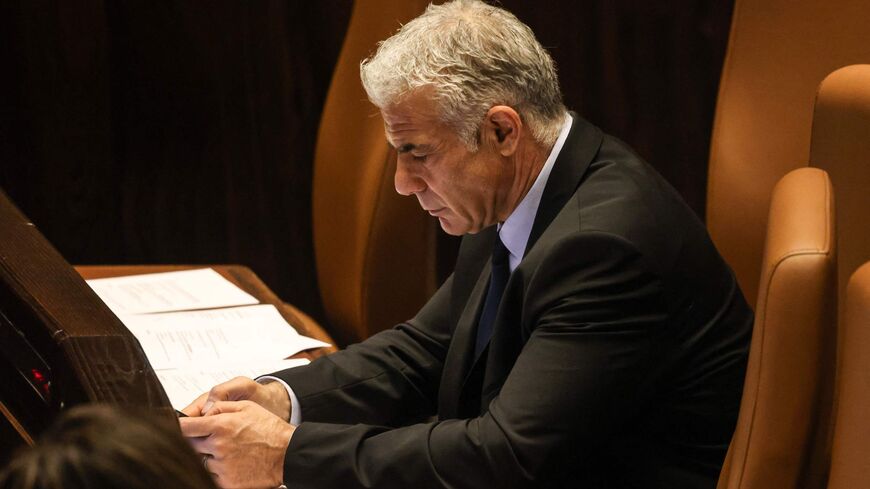 Israeli Minister of Foreign Affairs Yair Lapid attends a meeting at the Knesset in Jerusalem on June 30, 2022. - MENAHEM KAHANA/AFP via Getty Images

Opposition leader Benjamin Netanyahu called incoming Prime Minister Yair Lapid today, wishing him “four months of security quiet,” ahead of elections scheduled for Nov. 1. Israeli analysts opined that Netanyahu might have been hinting he would not offer him political peace in that period.

Lapid reportedly offered to resume the security briefings the head of the opposition traditionally receives from the premier, a tradition suspended during the last government. Even though Israeli law requires the opposition leader to engage in this exchange, Netanyahu refused, as he regularly argued against Naftali Bennett’s legitimacy as premier.

Netanyahu apparently declined Lapid’s offer, preferring to be briefed as he has been in recent months by the government’s military secretary. Netanyahu claimed that resuming the personal briefings by the prime minister could become a political exercise ahead of the elections.

Lapid started his first day as prime minister with a meeting in Tel Aviv with Shin Bet head Ronen Bar. Next he convened a meeting regarding Israeli civilians and the bodies of two IDF soldiers held by Hamas in Gaza. Hamas has recently signaled it is interested in a quick prisoner-swap deal, returning one of the Israeli nationals, who is apparently in poor health, in exchange for sick Palestinians held in Israeli jails.

US President Joe Biden congratulated Lapid yesterday, tweeting, "Congratulations to Yair Lapid, Israel’s new Prime Minister, and thank you to Alternate Prime Minister Naftali Bennett for your friendship over the past year. I look forward to seeing you both in July to celebrate the unbreakable US-Israel partnership."

Lapid responded, "Thank you, Mr. President. The ties between Israel and the United States are unbreakable. They are based on deep foundations of shared values and a common vision for the future. I look forward to welcoming you to Israel and strengthening the unique alliance between us."

Indian Prime minister Narendra Modi also thanked Bennett, tweeting in both English and in Hebrew, "Thank you His Excellency Naftali Bennett for being a true friend to India. I cherish our fruitful interaction and wish you success in your new role." Modi also congratulated Lapid on his new position, noting he hopes for the continuation of the strategic alliance between the two nations.

Lapid is expected to move this weekend temporarily to a house located near the prime minister’s official residence in Jerusalem. Israel’s security agencies said Lapid cannot move into the official residence before certain security renovations take place. Lapid will stay at a house nicknamed Villa Salameh, which has been used by the prime minister’s guards and also by Netanyahu’s son.

As prime minister, Bennett had preferred to continue living in his private home in Ra’anana so as not to take his young children from their schools. That decision was criticized by the great cost of fortifying the house to align with security requirements as well as the great disturbance caused to his neighbors by the security details and by the many demonstrations that assembled in the street.

Lapid will convene his first cabinet meeting on Sunday. On Tuesday, he will fly to Paris to meet with French President Emmanuel Macron, who he considers a true friend. He will return to Israel the same day. On July 13, Lapid is expected to receive Biden on an official visit to the region.