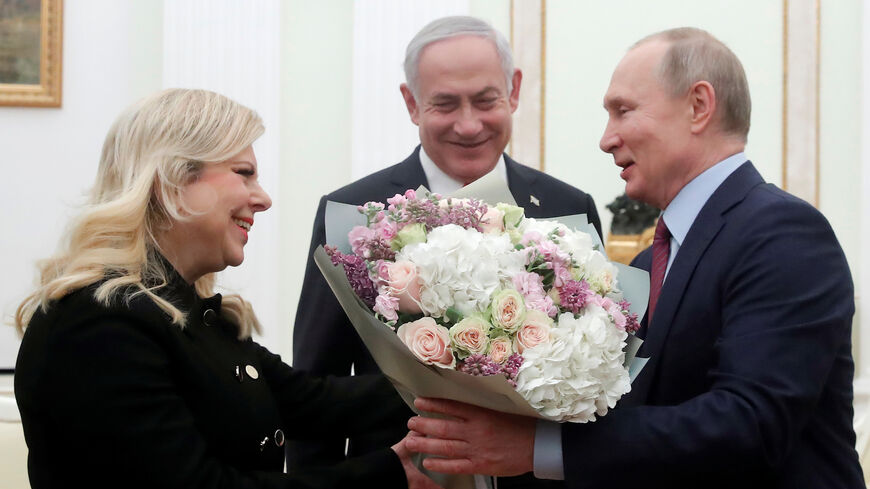 Israeli Prime Minister Benjamin Netanyahu looks as his wife Sara receives flowers from Russian President Vladimir Putin as they meet at the Kremlin in Moscow on Jan. 30, 2020. - MAXIM SHEMETOV/AFP via Getty Images

Russian President Vladimir Putin was one of the first world leaders to congratulate incoming Prime Minister Benjamin Netanyahu on forming his sixth government. “Russia very much appreciates your personal long-term contribution to the strengthening of friendly relations between our countries. I hope that the new government under your leadership will continue the policy of developing constructive Russian-Israeli cooperation in all areas for the benefit of our peoples and in the interests of ensuring peace and security in the Middle East,” read Putin’s Dec. 29 message.

Ukrainian President Volodymyr Zelenskyy was also quick to congratulate Netanyahu, tweeting, “I wish success on the way to the welfare and security of Israel. I confirm Ukraine’s readiness for close cooperation to strengthen our ties and confront common challenges, achieve prosperity and victory over evil.”

In his past terms as premier, Netanyahu had cultivated a close relationship with the Russian leader. Between 2015 and 2020, Netanyahu visited Russia at least seven times. Under Netanyahu’s leadership, the two countries established a military communication channel to avoid misunderstandings or accidental mutual targeting in Syria's skies. Israel’s security system considers this channel essential in its fight against Iranian entrenchment in Syria and against Iranian efforts to supply weapons for Hezbollah.

When Russia first invaded Ukraine, Netanyahu, then opposition head, was cautious in his statements not to directly attack Putin. It was only during his election campaign, and on the backdrop of repeated attacks by Zelenskyy against the Bennett-Lapid government, that Netanyahu hinted he might reconsider Israel’s refusal to supply Ukraine with weapons. Netanyahu will now have to face a dilemma on that geopolitical front.

Apart from cultivating his relationship with Putin as premier, Netanyahu had put great efforts into establishing close ties with several Euroskeptic and European nationalist leaders. He met on several occasions with Hungarian Prime Minister Victor Orban and formed an alliance with the so-called Visegard states of Poland, Hungary, the Czech Republic and Slovakia. Now that Netanyahu is back in power, his old conservative and far-right allies in Europe and elsewhere clearly hope to resume their collaboration.

Orban, for instance, was quick to hail Netanyahu’s comeback, tweeting Thursday, “Hard times require strong leaders," and "I am looking forward to expanding the cooperation between Hungary and Israel. It’s time to do big things!”

Another nationalist leader to congratulate Netanyahu was Italy’s Prime Minister Giorgia Meloni, who said she was looking forward to strengthening bilateral ties and working with the Israeli premier to ensure stability and peace in the Middle East.

The Israeli government was uncomfortable over Meloni’s September 2022 win. For years, the stated policy of Jerusalem has been no contact with parties originating in Nazi or neo-Nazi groups. That being said, parties originating in fascist movements are more of a grey area. When Meloni won the elections, then-Prime Minister Yair Lapid composed a carefully worded message congratulating the Italian people on the democratic process, and not Meloni personally. Netanyahu, on the other hand, called Meloni personally to offer his congratulations. His son Yair tweeted, “Congratulations Giorgia Meloni and the conservative camp in Italy!”

Completing the circle of Netanyahu’s old conservative and nationalist allies was India’s Prime Minister Narendra Modi, with whom Netanyahu established an especially warm friendship. He tweeted, “Heartiest congratulations to Prime Minister Netanyahu for forming the government. Looking forward to working together to strengthen our strategic partnership.”