Is Netanyahu concerned about anti-Semitic rulers? 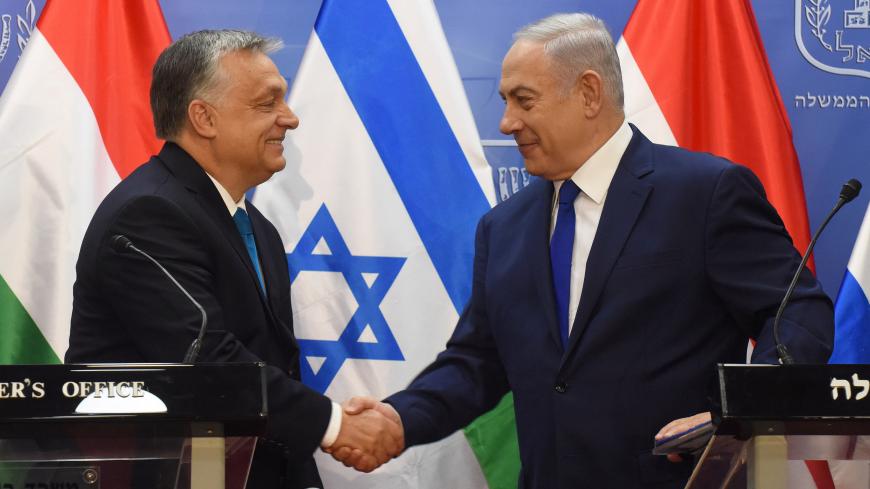 How many minutes, if not seconds, would it have taken Prime Minister Benjamin Netanyahu or his son Yair Netanyahu to tweet in rage against a Western leader who invited an illustrator (or a cartoonist) known for his anti-Semitic caricatures to meet with him? This is not some imaginary scenario. None other than President Donald Trump issued such an invitation to the White House on July 8. Apparently, he is not outraged by Ben Garrison’s caricatures, one of which depicts the presidents of the United States and Russia peeking from the skull of the angel of death who has a Star of David drawn on his nose and the word “War” boldly emblazoned on his forehead. Another of Garrison’s cartoons shows the US national security adviser and the head of the CIA as puppets of Jewish billionaires George Soros and the Rothschild family. All attempts to locate a smidgen of condemnation on Balfour Street (Netanyahu’s official Jerusalem residence) were in vain.

Just a week earlier on June 30, the Jewish People Policy Institute (JPPI) presented Netanyahu and his ministers with its annual report on the state of the Jewish people around the world. After the meeting, Netanyahu’s office reported that he had accepted the institute’s recommendation to establish a special body equipped with all the appropriate tools for multidisciplinary action against anti-Semitism.

What “tools” are appropriate for dealing with a Jewish prime minister who hands out seals of approval to anti-Semitic leaders? A survey conducted by the JPPI among a select group of 180 rabbis and Jewish community leaders found that 50% of the respondents believe the US administration is not fighting anti-Semitism effectively, and 40% are concerned about the decline in Jewish community participation in their regions due to fear of anti-Semitic incidents.

JPPI’s representatives presented the Cabinet with data indicating a sharp rise in the number of anti-Semitic incidents and in their intensity, peaking in the two deadly shooting attacks at American synagogues in Pittsburgh (in 2018) and near San Diego (in April 2019). The FBI reports that Jews are the most prevalent target of hate crimes, although they constitute fewer than 2% of the US population. Polls cited in the report indicate that almost 75% of them report feeling less safe in the past two years, meaning during Trump’s presidency.

JPPI co-chair Dennis Ross noted that there had been a significant decline in support for Israel among Democrats. Ross, a former adviser to US presidents from both parties, recommended that Israel do all in its power to nurture ties with both major American political parties. The report warned the government against signaling that its close ties with the Trump administration reflect support for its values. “The Israeli government runs the risk of alienating a significant part of the Jewish community in the United States with too close an embrace of the president,” the report’s authors wrote. “He is a polarizing figure in the United States, and identifying with him so publicly has served to alienate most Democrats and a significant majority of American Jewry from Israel.”

Following up on its criticism of the alliance with the American conservative right, the JPPI noted that populist leaders of countries such as Hungary, Italy and Poland, for example, who are supportive of Israel “may create an environment unfriendly to the immigrant and to ‘the other,’ which can encourage a rise in anti-Semitism.” It would be interesting to know what went through Netanyahu’s mind and that of his Cabinet ministers when they read the following words from the report: “Embracing authoritarian leaders such as [Viktor] Orban of Hungary raises the question of whether the government of Israel will itself standup against anti-Semitism when it is diplomatically inconvenient. …” Did the sentence remind any of the ministers that Netanyahu and his son are helping Orban sling anti-Semitic mud at American-Hungarian Jewish philanthropist George Soros?

The report also warned that close affiliation with leaders such as Orban signals to Diaspora Jews that the Jewish-Israeli public is distancing itself from values such as tolerance and respect for others, which most in the Diaspora view as core Jewish values. However, no “special body” dedicated to fighting anti-Semitism will be able to imbue Netanyahu with values such as tolerance toward others and respect for minorities. The prime minister cannot shun supporters such as Hungary’s Orban, Brazil’s Jair Bolsonaro and the Philippines’ Rodrigo Duterte. He needs the backing of leaders not particularly interested in human rights who do not care that Israel is violating the basic rights of the Palestinians.

The heads of the policy institute warned that the spread of anti-Semitism and the helplessness of local European authorities (meaning, Netanyahu’s friends) in dealing with this phenomenon could result in significant harm to Jewish communities, some of whose members are considering emigrating from their countries or moving to Israel, while others might give up their Jewish identity altogether.

At the Cabinet session that discussed the report, Israel’s newly installed Minister of Education Rabbi Rafi Peretz, a representative of the far political right, described mixed marriages of Jews to non-Jews as “a second Holocaust.” In other words, marriage to a non-Jew is like burning millions of Jews in ovens. However, the same Peretz, like the prime minister who entrusted him with the education of Israel’s schoolchildren, preaches for the annexation of the West Bank — territory populated by some 3 million non-Jews. On the one hand, Netanyahu suggested during discussion of the report that Israel prepare for a mass influx of Jews seeking a safe haven from terrorism and assimilation abroad. On the other, he promotes policies that perpetuate the violent conflict with Israel’s neighbors and encourages the settlement of Jews in the midst of a hostile, non-Jewish population. What kind of “Jewish identity” does he propose for the new immigrants moving to what is essentially, in demographic terms, a binational state heading for apartheid?

The JPPI experts, who cannot be suspected of left-wing leanings (or else they would not have been granted access to the prime minister’s office), are not satisfied with Netanyahu’s excuse that there is no “Palestinian partner” with whom to talk peace. In order to prevent Israel’s transformation from a Jewish to a mixed state (by annexing the West Bank and creating a binational state), something they define as a “strategic threat to Israel’s very Jewish identity,” the report’s authors recommend that Israel leverage Trump’s friendly attitude to promote unilateral steps on the Palestinian front.

In the foreseeable future (at least until Israel’s next government is formed later this year), Netanyahu and his ministers are likely to keep granting Trump immunity from any criticism of his friendly attitude toward anti-Semitic circles. The requisite condemnation will certainly not emanate from the Jerusalem home of the man who has crowned himself “leader of the Jewish people.”

By the way, on July 10, the White House announced it was withdrawing the invitation to Garrison following the protest of US Jewish groups. None of the appeals on that score were reported to have originated from Netanyahu’s residence.