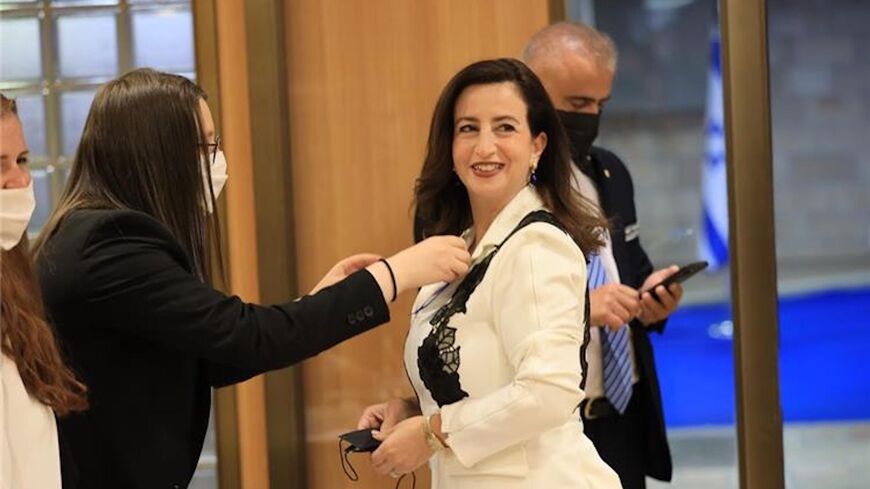 Foreign Minister Yair Lapid has appointed Knesset member Ghaida Rinawie Zoabi of Meretz as Israel’s new consul general to Shanghai in a milestone for women. Zoabi will be the first Arab woman to be appointed to one of Israel’s top diplomatic posts.

Zoabi thanked Lapid, saying, “It is an enormous privilege to be the first Arab woman to serve in such a senior diplomatic position. I am glad to have a chance to contribute to the important mission of promoting economic, commercial and cultural cooperation with one of Israel’s most important partners anywhere, from the consulate general in Shanghai, one of the major nerve centers of the global economy.”

This should be a happy occasion for Israeli democracy, elevating a Muslim Arab woman who never hid her reservations about defining Israel as a Jewish state. But the appointment immediately came under attack from the right, including within the coalition itself.

The criticism initially attributed the appointment to cynical political reasons: keeping Zoabi out of the Knesset. She was deemed too independent-minded after having embarrassed the coalition by voting Jan. 17 against the Conscription Act, breaking coalition discipline. “In protest, I voted today with my conscience, for Arab society and against bills that the government wanted to promote,” Zoabi said. Her own party was furious and the leaders of the coalition were presented with a problem.

After the Feb. 23 resignation of Minister Eli Avidar, Lapid seemed determined to neutralize the opposition within the coalition. Despite all his reassurances that he would engage in clean politics, he was using the Foreign Ministry to deal with internal political issues.

Zoabi gave a radio interview the day after the announcement of her appointment. When asked what she would do when the Israeli national anthem is played at the consulate, she responded, “I don’t know the anthem by heart. The words ‘Jewish soul’ exclude me.” When asked if she recognized Israel as the Jewish state, she said, “Israel is a democracy as far as I am concerned. I want it to be an egalitarian democracy, with equal rights for all.”

Her remarks upset the right, including members of the coalition. Minister of Communication Yoaz Hendel was extremely critical of Lapid’s choice, saying, “It is inconceivable that someone like her with non-Zionist positions would be the face of Israel in one of the most important countries in the world.”

“Bennet and Lapid are carrying on with their fire sale of Zionism for the sake of political survival,” tweeted former Prime Minister Benjamin Netanyahu. “Their decision to appoint Knesset member Zoabi as a consul in China is scandalous. It is inconceivable that the person representing Israel in one of the most important world powers would be someone who does not recognize Israel as a Jewish state and is opposed to our anthem. I demand that the government withdraw her appointment today.”

Netanyahu later released a video in which he is seen sitting in his office. When one of his aides informs him of Zoabi’s appointment, he responds with shock, asking, “For which country?” When told that it was Israel, he acted with disbelief: “You’re kidding. … Zoabi opposes the anthem, she is opposed to Israeli sovereignty in the Golan Heights and she is opposed to Israel as a Jewish state. … It’s ridiculous. It’s like taking some scammer on Tinder and making him an adviser on relationship issues. … It is so ridiculous, it is absurd.”

The reactions from opposition parties on the right echo claims against the government from the day it was formed, chief among them that it is a “post-Zionist” government, a sore point for the coalition. The opposition is referring to Ra’am, which identifies with the Islamic Movement, and to certain members of Meretz who do not recognize that Israel is, first and foremost, a Jewish state. When someone like Zoabi is appointed to a prestigious and important diplomatic post, it serves Netanyahu’s interests and embarrasses the right and centrist members of the coalition.

Given the tense political and public mood in Israel, even a symbolically important achievement for women and equality can become a political weapon. It is just as easy to imagine Netanyahu appointing Zoabi to the same position if he believed it would rescue him politically. Had that happened, he would have marketed the move as a personal achievement.

In Lapid’s announcement, he said that Zoabi came with a rich background in administration and diverse and impressive economic experience and public service. “I wish her the best of luck. I am sure she will lead Israel’s consulate general in Shanghai to important new achievements,” he said. “No one questions the importance of China in general and Shanghai in particular to the global economy. Our economic relationship with China is a major engine of growth for the Israeli economy and one that we must continue to promote.”

Zoabi, a 49-year-old mother of three from Nazareth, has an MA in literature and business administration and took part in program for administrators at Oxford. She has run various nongovernmental organizations and social programs and worked to promote equality between Arabs and Jews in Israel. She also spearheaded many major government projects and in 2018 was named one of the 50 most influential women in Israel.

Nevertheless, a certain commitment comes with diplomatic posts. Zoabi will need to understand that she has left Israel’s internal playing field, divided into left and right. It is in her interest now to avoid controversial statements that attack the Israeli consensus, including her attitude toward HaTikvah, and the idea that Israel is both Jewish and democratic, especially in times of conflict and in clashes with the Palestinians. Should she fail, she will be a dead weight not only on the current government but on Israel’s foreign service.