As minister resigns, Israel’s government more fragile than ever

The resignation of Minister Eli Avidar reflects the fragility of the Bennett-Lapid coalition, composed of a narrow majority of 61 Knesset members. 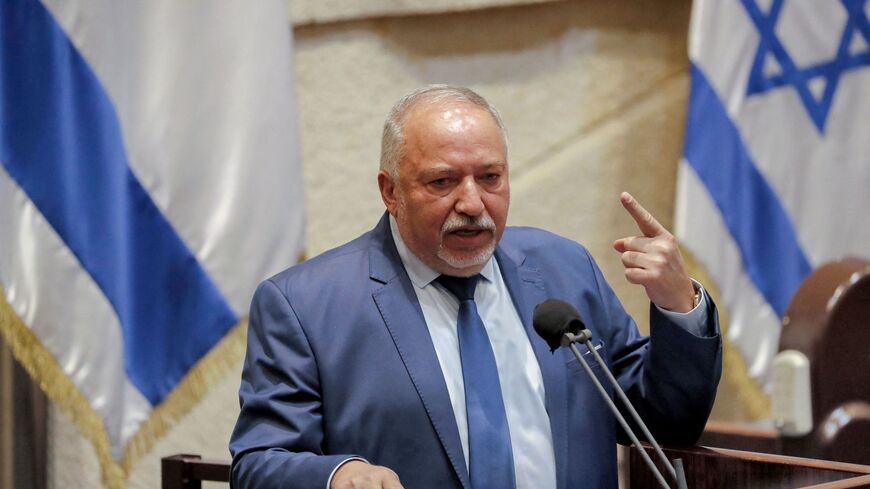 Israeli Finance Minister Avigdor Liberman speaks during a plenum session and vote on the state budget at the assembly hall in the Knesset in Jerusalem on Nov. 3, 2021. - AHMAD GHARABLI/AFP via Getty Images

Minister Eli Avidar submitted his letter of resignation on Tuesday afternoon [Feb. 22], possibly marking the beginning of the end for the current coalition.

Avidar resigned from the Knesset last July upon being appointed Minister in the Prime Minister’s Office, in keeping with the Norwegian Law, which requires ministers give up their Knesset seats. He will return to be a regular member of Knesset on Thursday afternoon, 48 hours after he submitted his resignation.

From that point onward, Avidar will be the 61st vote in a very narrow coalition. He is expected to operate as a one-man faction, and to make demands for every major vote to a coalition that already has problems getting its legislation through the Knesset.

Avidar’s resignation came after he did not receive the appointment he wanted as Minister of Intelligence. Instead, he remained a minister without portfolio, with no direct responsibility or influence on government policy. At the press conference, he presented a serious indictment of Prime Minister Naftali Bennett and the coalition as a whole. While he said that he has no plans to bring down the government, which he supported in order to rid the country of Netanyahu’s “government of darkness,” there is no way of knowing how far he will go.

“The government’s policies in the last few months made my position in the government insufferable,” he said. “I waited for the leaders of the coalition to approach me, so as not to send shockwaves through the government, and to see, as I had hoped, that the policies of the previous government would be stopped.”

Avidar was a referring to a whole series of issues, chief among them the handling of the coronavirus epidemic, which gives the government wide range for its activities, including some that he claimed infringe on personal rights.

Avidar was a leader of the Balfour Street protests against the previous prime minister. He demonstrated against Netanyahu in front of his official residence and at major intersections, while the first waves of the coronavirus were spreading across the country. This made him a folk hero of sorts to the masses of people who opposed Netanyahu. He opposed vaccine mandates and spoke about a liberal agenda and the need to protect the basic rights of the individual in a democratic regime.

On Tuesday, Avidar called Bennett an imitation of Netanyahu. “The man grew up on Netanyahu and does not intend to free himself of him," Avidar said. "He copies him in his every move.”

Even if Avidar has no plans to bring down the current government, everything seems to indicate that he is preparing to create a new party, and that he will act as a one-man opposition to the current coalition, even if he is a member of it on paper.

Finance Minister Avigdor Liberman, who positioned Avidar in the number-4 spot on Yisrael Beitenu’s Knesset list, now has no way to control him. It was also learned yesterday that Foreign Minister Yair Lapid offered him various ambassadorships. Avidar turned them all down.

In one case at least, Lapid was able to remove a rebel Knesset member from Meretz by giving her a position in the Foreign Service. A few hours after Avidar’s resignation, it was announced that Knesset Member Ghaida Rinawi Zoabi would be appointed Israel’s General Consul in Shanghai.

This is a very senior position, and a very desirable one. It is now thought that the move was an attempt to stabilize the coalition. Zoabi voted against the Conscription Act just a few weeks ago, and the law failed to pass as a result. Her new appointment neutralizes a pocket of opposition in advance of major votes, but it also signals that Bennett and Lapid can be extorted, and that all it takes to gain a promotion is a “revolt,” or even just a threat.

It has been eight months since the current government was founded against all odds, bringing hope for something new. Now, its basic problems are beginning to crop up. At the start of this very narrow and ideologically polarized coalition, everyone seemed to agree that the government would survive, so they agreed to compromise on major ideological difference. As time passes, however, personal and electoral interests are rising to the surface, making it difficult for the Knesset to function.

Legislation has ground to a halt in the last few weeks. This was exacerbated by a threat from the head of the Blue and White party, Defense Minister Benny Gantz, that his faction would be going “on strike” in the Knesset because of inaction on the Budgetary Pensions Law, which his party supports (and which benefits career officers, who are among his most ardent supporters). Meretz and the Labor Party contend that it is an anti-social piece of legislation, which gives extra rights to an economically well-off sector of the population.

The crisis is only adding to the bad blood that already exists between Gantz and the coalition. On Feb. 21, the defense minister left a meeting with the prime minister in his office in the Knesset, in which he learned that Bennett’s office was briefing journalists about him in unflattering ways. An angry Gantz responded that his party will not vote with the coalition until legislation pertaining to the IDF, and especially the Pension Law, passes three readings in the Knesset.

The Knesset will go on recess in two weeks, and getting through that period without any further problems will not be easy. The Muslim coalition party Ra’am is already flexing its muscles over the Citizenship Law, demanding that the legislation passes the Interior Committee, headed by its own Knesset Member Walid Taha.

Despite all this turmoil, there is no clear and immediate threat to the coalition for now. Ironically, that can be attributed to one man — former prime minister Benjamin Netanyahu. His strong showing in the polls, which is only improving, united an otherwise divided coalition, which fears that he may yet return. The problem is that they can’t keep worrying about that for long. The leaders of the current coalition need to restore order in their ranks. If they don’t the outcome is inevitable.