If new elections are called this week, the opposition Joint List will be hard pressed to convince its electorate it has its own agenda worth supporting. 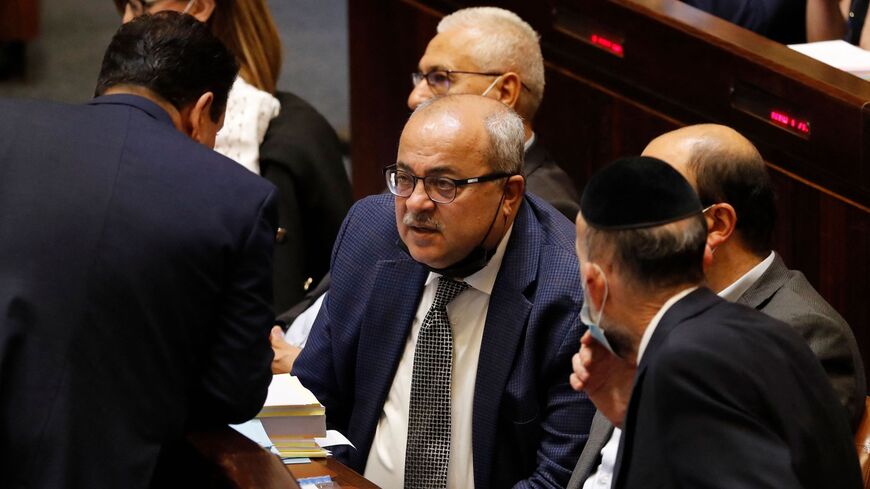 Ahmed Tibi, Knesset member for the Joint List and leader of the Arab Movement for Change (Ta'al) party, attends a plenum session and vote on the state budget at the Knesset in Jerusalem Nov. 3, 2021. - AHMAD GHARABLI/AFP via Getty Images

Members of the Arab Joint List have been quiet on social media over the past few days. Party senior Ahmad Tibi posted his last tweet June 20, the day Prime Minister Naftali Bennett and Foreign Minister Yair Lapid announced their intention to disperse the Knesset. Party head Ayman Odeh tweeted June 23, "It was the effort to preserve the occupation that overthrew the government."

The Joint List opposed the decision of the Arab, Islamic Ra’am to join the coalition, and its members have said time and again they would support efforts to topple it. Still, they gave very few interviews last week, while Ra’am head Mansour Abbas has been constantly invited to appear on radio and TV talk shows.

Clearly, as far as the press is concerned, Ra’am is a significant player in the developing political drama that could lead to new elections in the fall, while the Joint List's role is secondary.

Bennett’s government hopes to dissolve the Knesset today or later this week, meaning that Israel will enter its fifth election cycle in just three and a half years. The only thing that could possibly prevent it is opposition leader Benjamin Netanyahu managing to form an alternative government in the current Knesset. Unlikely? Perhaps. But Israelis have learned over the years that with Netanyahu, anything is possible.

All sorts of voices on the Israeli right have declared unequivocally that the experiment of including an Arab party in the coalition was an abject failure.

Still, Knesset member David Amsalem of the Likud said June 26 that he does not reject the possibility of including Ra’am in the new government he imagines being formed by the Likud, provided that the coalition has a majority of seats without the Arab party.

Netanyahu responded as leader of the Likud, stating unequivocally that he rejects Amsalam’s remarks: “Under my leadership, the Likud never agreed and never will agree to include Ra’am in any coalition whatsoever.”

The open dispute highlights how important Ra’am has become in the Israeli media’s political discourse and intends to take part in whatever future coalition is formed. Ra’am has also managed to introduce an entirely new agenda to the Arab sector of civil issues such as budgets, infrastructure and the war on violence and crime in the community.

A debate is emerging among the Arab population on whether Abbas and his party succeeded in advancing that agenda. Right now it appears that the Joint List, which will be competing with Ra’am for the Arab vote, has been unable to create a new agenda of its own and all it has left is to argue that Abbas and Ra’am failed.

In its coverage of Israeli politics over the last few weeks, the Israeli media seems to have focused almost exclusively on Ra’am. If the Joint List is mentioned at all, it is usually to give its response to political maneuvers by Ra’am or another Arab member of the coalition.

Ra’am has become the pivot point of Arab-Israeli politics. In contrast, the three parties that make up the Joint List won 13 seats in the election of September 2019 and a record 15 seats in March 2020, when the Likud heavily promoted anti-Arab sentiments.

After the March 2020 vote, the Joint List continued to ride the wave of anti-Netanyahu mobilization. But then, ahead of March 2021, the Likud took a different approach, with Netanyahu rebranding himself as “Abu Yair” and avoiding direct attacks on Arab society. Voter turnout dropped to 50% among the Arab public, leading to less Arab representation in the Knesset, with the Joint List winning six seats and Ra’am winning four. Ra’am made history by joining the coalition and creating its own agenda and its political rivals in the Joint List spent an entire year fighting it, cooperating with the Likud to see Ra’am and Abbas fail.

In a live Arabic-language event on Facebook June 20, Tibi and his followers discussed Bennet and Lapid's decision to dissolve the Knesset. Tibi tried to explain to his followers why the current government was “bad for the Arabs” and even further right than any Netanyahu government. He pointed out that it invested more in the settlements, granted Jews access to the Al-Aqsa compound and allowed the Jerusalem Day Flag March to proceed, while Netanyahu stopped it last year. He also brought up the attack on the funeral of journalist Shireen Abu Akleh.

Tibi claimed that the Joint List has not given up on its principles and attacking Ra’am, perhaps successfully. Still, judging by the reactions of quite a few followers, Tibi failed to present a new agenda of his own for the Arab public and offered no strong arguments to convince Arab voters to vote. The polls now show the Joint List as unlikely to win more than the six seats it currently controls.

Zeiad Mawasi is a veteran member of the Joint List’s Hadash faction. In a conversation with Al-Monitor, he agreed that the Joint List lacks an agenda. “The Joint List was in the opposition, without any sway on the government. Although it presented quite a few respectable positions by opposing laws that were harmful to Arab citizens of Israel or the Palestinian population in the territories, no one is sure about they actually do want. They need to start working as hard as they can. Otherwise, their situation will be abysmal. I expect the people in charge to launch a campaign informing their electorate about their objectives and what they plan to achieve in the next Knesset.”

Attorney and Arab political activist Zakariah Eghbariah told Ehna TV, “The path taken by Ra’am is new to both the Arab and the Jewish sectors. Today we see [Finance Minister Avigdor] Liberman and Bennett praise Mansour Abbas when they once incited incessantly against the Arab public. Arab society has had its full of all the slogans it's heard constantly for the past 70 years. Abbas decided to take a new path instead of joining those chanting, ‘No to fascism! No to the occupation!’ What we have seen is that the time has, in fact, come to initiate a new kind of discourse.”