Back in the opposition, Ra’am leader Mansour Abbas says that the most important thing right now is to seek solutions for the miseries of the Israeli Arab public. 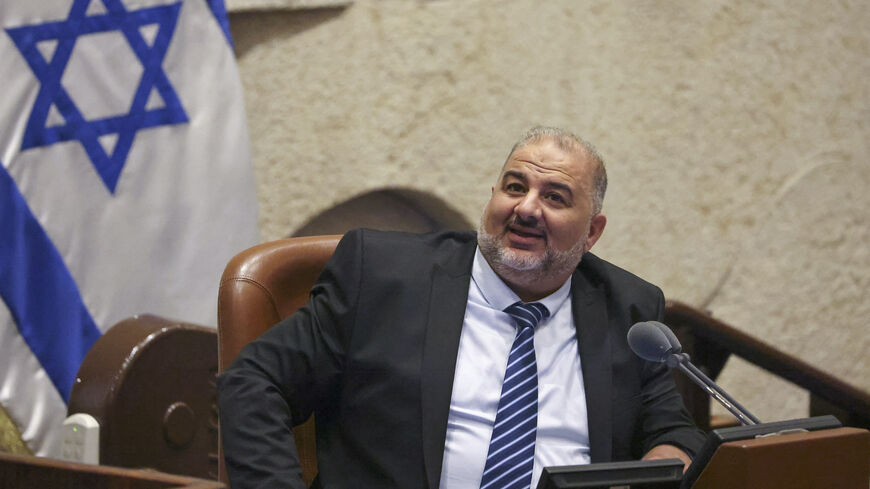 Head of Israel's conservative Islamic Ra'am party Mansour Abbas leads a discussion and a vote on a bill to dissolve the Knesset, during a session in Jerusalem, June 29, 2022. - Ahmad Gharabli/AFP via Getty Images

Abbas lashed out at his rivals, saying, "If they are not interested in joining the coalition and not functioning as a blocking bloc, at least they should be neutral and try to promote solutions to the hardships of Arab society."

This is not the first time Abbas has raised such accusations against other Arab Knesset members. He holds that his place in the last government's coalition was an opportunity to help the Arab sector. Hadash-Ta’al, however, has no desire to participate in any Israeli government that does not advance the two-state solution.

Another example of this divergence in views could be seen last week, when National Security Minister Itamar Ben-Gvir ascended Temple Mount. Hadash-Ta’al had frequently spoken out against incidents at Al-Aqsa compound during the Bennett-Lapid government. Each time, it accused Abbas of bearing responsibility for what happened, since his party was part of the ruling coalition. Ra’am is no longer a member of the coalition, but Ben-Gvir still visited the site. This raises an important question: How exactly did bringing down the previous government lead to some improvement of the situation?

Ra’am was once part of the Joint List party, which included also Hadahs and Ta’al. At its height, in 2020, the Arab Joint List alliance garnered 15 Knesset seats. A year later, ahead of the elections, and seeking pragmatic cooperation with the government, the Ra’am party split. It then joined the Bennett-Lapid government with the distinct purpose of getting more budgets and more development programs for the long-neglected Arab sector. At the last Nov. 1 elections, Ra’am and Hadash-Ta’al reached five Knesset seats each.

How did that happen? Many Arab voters stayed home. Others supported the Arab Balad party, which did not make it to the Knesset-entry threshold. From Abbas’ point of view, the decline in the number of Arab legislators in the current Knesset is what enabled Benjamin Netanyahu to assemble a majority coalition.

More so, Abbas claims that Hadash-Ta’al leaders did everything they could to get him and his party out of the coalition, regardless of the consequences. It didn’t matter to them, he argues, as to what kind of government would replace the former coalition.

In an interview with Radio 103FM, Abbas said, “Tibi helped Netanyahu return to the prime minister’s office. Last year, they did everything they could to thwart the previous government. They [Hadash-Ta’al and the Likud] worked together to bring down the last government.” In an interview with Ynet, he claimed that because of Hadash-Ta’al leaders refusing to join him in the coalition, Israeli Arabs missed out on a historic opportunity.

Asked about calls by Tibi to reestablish the Joint List, Abbas responded, “We need to be united around a common purpose. The members of those parties do not believe in my approach. They have adopted a dogmatic approach. They do not want change.”

Odeh was quick to respond. In an interview with Arabic-language Nas Radio he said, “It is disgraceful that Abbas is starting this very dangerous time for our people by attacking us, instead of [attacking] the racist government that was formed. Had Abbas not taken apart the Joint List with its 15 seats, Netanyahu would not have been able to form a right-wing government.”

Despite these acrimonious attacks, Abbas does not seem ready to slam the door on any future cooperation with the Netanyahu government, even if it is from the opposition benches. “The Arab sector is facing numerous crises,” he said, and these demand responses. In the past, I held talks with Benjamin Netanyahu and Benny Gantz to take full advantage of the political situation in order to bring about solutions to benefit the Arab sector, which is facing terrible problems.”