Israeli Prime Minister Benjamin Netanyahu has a multi-element, comprehensive plan to thwart the threat of negotiations toward a two-state solution. 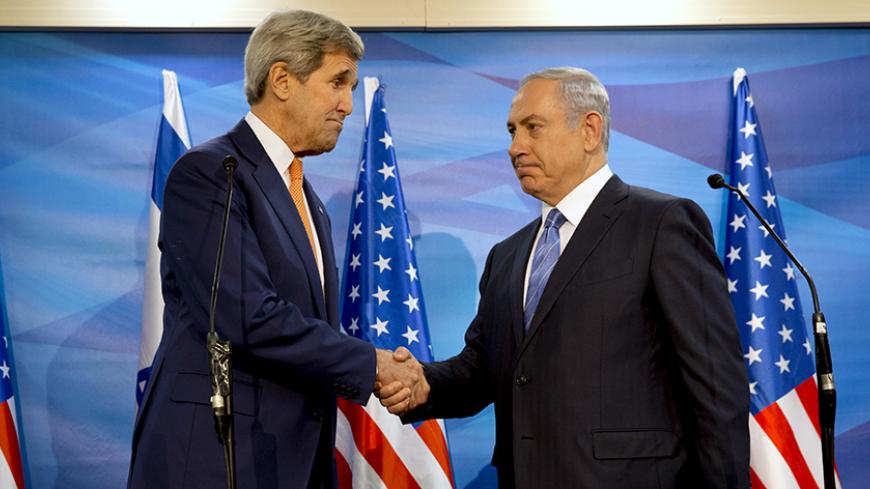 A two-state Israeli-Palestinian solution seems further away today than ever. Yet, the Israeli prime minister’s office doesn't take this for granted and has developed a multipronged strategy as insurance.

Israeli Prime Minister Benjamin Netanyahu continues to place roadblocks in the path of any political process designed to bring about a two-state solution, according to a senior European Union official in Brussels who visits the region on a regular basis and spoke to Al-Monitor on condition of anonymity.

“There are two facets to Netanyahu’s anti-two-state strategy," the official said. "Netanyahu attempts to ensure the nonviability of a Palestinian state, mainly through the expansion of settlements, and at the same time he recites a long list of reasons why Palestinian President Mahmoud Abbas is sabotaging possible negotiations. In every meeting with Netanyahu, we discover another obstacle and hear another argument. In the corridors of the EU headquarters there are those defining Netanyahu as a 'serial alibi-ist,' always finding a reason not to place himself at the scene of a two-state solution negotiation.”

At EU headquarters, there is a sense of hopelessness regarding Israeli-Palestinian conflict resolution, given Netanyahu’s rejection of any initiative, Abbas’ weakness and the US abstention from attempts to revive a peace process or to accept a UN Security Council resolution on the issue.

The EU source warns of a possible collapse of the Palestinian Authority and an outbreak of a violent intifada.

Netanyahu has a different analysis of the situation. A close confidant of the prime minister, talking to Al-Monitor on condition of anonymity, said Netanyahu is interested in a two-state solution with a demilitarized Palestinian state, conditioned on the recognition of the Jewish State of Israel and with stringent security measures throughout the West Bank.

Yet the source said, Netanyahu believes that now is the wrong time to move in that direction, when the entire region faces the threat of fundamentalist terror groups such as the Islamic State (IS), al-Qaeda, Hezbollah and Hamas. Terror, according to Netanyahu, must first be quelled — only then can political negotiations take place.

The Jerusalem source admitted the prime minister's office clearly has a plan to delay the two-state solution. The strategy consists of several elements.

First, the right-wing HaBayit HaYehudi (Jewish Home) party of Naftali Bennett needs to be kept within the coalition. Netanyahu has made this clear to Zionist Camp leader Isaac Herzog in back-channel talks on a possible national unity government. The prime minister considers Israeli settlers his main political base for his next election campaign. This constituency must be convinced that Netanyahu is their best guarantee against a Palestinian state, as he knows how to outmaneuver the international community.

Second, settlements need to be expanded, which would render establishing a Palestinian state impossible. This is especially true in the case of the Jerusalem-area settlements and those outside the settlement blocs that disrupt the contiguity of a future Palestinian state. Agriculture Minister Uri Ariel said in a Dec. 18 interview with the daily Israel Hayom that by 2019, the government plans to increase the number of settlers by 50% — to 600,000 — in the West Bank (not counting East Jerusalem).

Then there is the element of resisting US pressure. Netanyahu responded with a resounding "No" to US Secretary of State John Kerry during Kerry's last visit on Nov. 24 regarding any meaningful confidence-building measures, such as the release of Palestinian prisoners. Netanyahu excels in resisting US pressure and pointing the finger at Abbas. During the Kerry peace initiative of 2013-14, the prime minister agreed to certain concessions on a border based on 1967 lines, but conditioned them on Palestinians recognizing Israel as a Jewish state, something he knew the Americans would accept but Abbas would reject.

A fourth strategic component of Netanyahu's plan is cooperation with neighboring countries. Part of his well-orchestrated, anti-two-state strategy is to use Israel's close security cooperation with Egypt and Jordan to defuse their pressure on the Palestinian issue. The same is true for Israel potentially exporting natural gas to Turkey.

In addition, Netanyahu's office views IS as a major propaganda asset in making the case against a Palestinian state. The prime minister and his representatives equate random Palestinian terror attacks by individuals to IS terror, and warn that the West Bank risks turning into an IS base should Israel withdraw. This approach works well with most Israelis and with some in the international community who are mesmerized by the IS threat.

This strategy also shapes the content of Netanyahu’s policy dialogue with both the United States and the EU.

This indicates that those who claim that Netanyahu has no foreign policy or does not achieve his strategic goals are wrong. The strategies, the diplomacy and the rhetoric all serve one central purpose: to prevent the establishment of a Palestinian state. Israel is shaping a new reality, from the Mediterranean Sea to the Jordan River — a binational apartheid state in the making.