Abbas turns to Moscow in search for new Mideast mediator

Palestinian President Mahmoud Abbas has stepped up his diplomatic offensive to secure support for international sponsorship of the peace process. 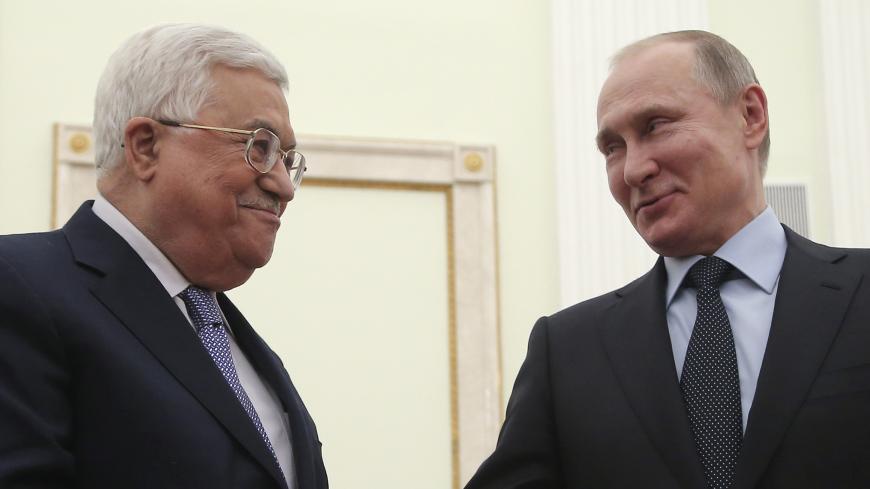 AMMAN, Jordan — Palestinian President Mahmoud Abbas has stepped up his recently launched diplomatic offensive on future peace negotiations, including by emphasizing the need for Moscow to reassert a balancing role in the Middle East conflict.

Abbas' Russian trip is remarkable in that it reflects a major shift in Palestinian diplomatic efforts aimed at dislodging the United States as the sole sponsor of the peace process. The Palestinian ambassador to Russia, Abdel Hafiz Nofal, had told Maan TV on Feb. 11 that Abbas is seeking a new sponsor for peace. “We want a sponsor that is serious about the peace process after the United States has failed over 25 years,” Nofal said. “We believe that Russia is ready to play this role.”

Nofal added that the Palestinians want Russia, China and the European Union to have a bigger role in the new international order. Russian media reported on Feb. 11 that Putin had canceled a trip to Sochi to meet with Abbas.

Nofal further explained Palestinian objections to US-led talks in an interview published by WAFA, the Palestinians' official news agency, Feb. 11. “President Abbas announced that for the Palestinians, the United States is not welcome to play the role of broker because of its bias toward Israel,” Nofal said. “At the same time, we remain committed to the peace process and wish to resume it and achieve a two-state solution.”

Abbas senior adviser Majdi Khaldi hinted in press reports from Feb. 11 that the effort is aimed at launching an international peace conference. “Russia can make any initiative it wants after discussions with the Palestinians,” Khalidi said, leaving Moscow with a wide range of options. “Whatever the Russians suggest, we will welcome, after Palestinian-Russian discussions.”

Abbas took and has maintained an aggressive posture ever since US President Donald Trump recognized Jerusalem as Israel’s capital on Dec. 6, and the Palestinian Central Council approved his plan to reject a US-sponsored “ultimate deal.” The visit to Moscow follows a decision made Feb. 1 by Arab foreign ministers, meeting in Cairo, calling for a new international mechanism for peace.

During the last four weeks alone, Abbas has visited Cairo to attend an Al-Azhar University conference in support of Jerusalem on Jan. 17; Addis Ababa, for an African summit on Jan. 28; and Brussels, for discussions with European foreign ministers on Jan. 22 and a meeting with Belgium Prime Minister Charles Michel Jan. 23. The Palestinian leader also squeezed in a state visit to Jordan to meet with King Abdullah II on Jan. 29. Abbas is scheduled to speak at the UN Security Council’s special session on the Middle East on Feb. 20 in New York.

Riyad Mansour, Palestinian ambassador to the United Nations, told Saudi newspaper Arab News on Feb. 3 that Abbas will be extending an olive branch at the Security Council meeting. “We stretch our arms out for peace, and we will make sure that the international body takes on its responsibility for world peace,” Mansour said.

The model that Abbas and the rest of the Palestinian leadership are trying to emulate is that of Iran that resulted in the nuclear agreement. In that process, the international community was represented by the P5+1 — that is, the five permanent members of the UN Security Council including China, France, Russia, the United Kingdom and the United States — plus Germany.

Slovenia has indicated that it plans to recognize Palestine, and a three-country coalition of Ireland, Belgium and Luxembourg is working together to announce recognition simultaneously. Sweden, which recognized the State of Palestine in October 2014, would like to see other European countries follow them, a senior Swedish official told Al-Monitor.

France, whose president, Emmanuel Macron, said on Jan. 24 that his country will not recognize Palestine at the present time, appears to be the key country pushing to play kingmaker in any new peace mechanism.

Abbas’ diplomatic offensive appears to be focused on securing an international breakthrough that will limit destructive actions by Washington without totally eliminating the US role. Abbas understands that he needs the United States to put pressure on Israel, but he does not want it to have a monopoly at any talks. It is too early to say whether the Palestinian president will succeed in this difficult balancing act.