It seems Palestinian President Mahmoud Abbas is asking Russia to step up its role in resolving the Israeli-Palestinian conflict, as the United States is slowly retreating from dealing with the region's issues. 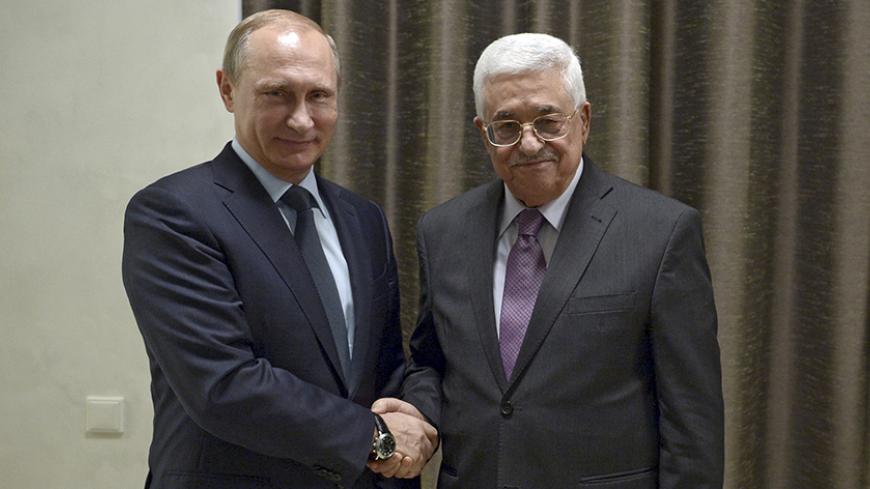 Palestinian President Mahmoud Abbas made an official visit Sept. 22 to Moscow, where he met with his Russian counterpart, Vladimir Putin. They discussed the regional situation, Middle East events and Russia's role in the peace process, as well as the latest developments in Jerusalem and continuous Israeli attacks against Islamic and Christian holy sites.

Al-Monitor learned from an official who was part of the delegation accompanying Abbas that the president had a busy schedule during his visit. In addition to meeting with Putin, he met with Russian Prime Minister Dmitry Medvedev; Patriarch Kirill of Moscow, the head of the Russian Orthodox Church; and Sheikh Rawi Ain Eddine, the head of the Russian Iftaa Council. Abbas also visited the Peoples’ Friendship University of Russia and the Imperial Orthodox Palestinian Society, and he met with Sergei Stepashin, chairman of the Accounts Chamber of the Russian Federation, in addition to meeting with Arab ambassadors in Moscow.

The visit came in light of the deadlock on Palestinian-Israeli negotiations and the absence of US pressure on Israel to resume these negotiations. As the international community is preoccupied with other issues in the region, such as the war in Syria and the international coalition’s fight against the Islamic State (IS), Palestinians are concerned that the world might not be paying attention to their cause.

Abdel Hafiz Nofal, the Palestinian ambassador to Russia, told Al-Monitor, “President Abbas' visit to Moscow at this particular time aimed at coordinating the Palestinian and Russian positions concerning major issues in the region, in light of Israel’s attacks on Al-Aqsa Mosque, its [Israel’s] attempt to divide it [the mosque compound] in time and space, and its quest to drag the region into a religious war. Through this visit, the Palestinian position seeks to activate Russia's role and make it more consistent and effective. Palestinians want a solid Russian position that would be more supportive of them, to confront the Israeli infringement of their legitimate rights, and they hoped this visit would strengthen Palestinian-Russian relations.”

Abbas' visit could point to Russia’s readiness to cooperate with the Palestinians in the energy industry and to participate in gas and oil extraction in Palestine projects, which are suffering a severe shortage. Russia's involvement would allow Palestinians to take advantage of Russian oil extraction and possibly establish a power station under Russian supervision.

Alaa Abu Amer, a former assistant to a Palestinian foreign minister for Eastern Europe affairs, told Al-Monitor that Abbas' visit to Moscow stems from the Palestinian conviction that “Russia is beginning to return as a key [player] in international politics, especially in the Middle East. [Palestinians] are also [dissatisfied] with the US' stubborn policies that Arabs and Palestinians see as unable to resolve the pending regional issues in light of a US attempt to tear the region apart and turn it into small rival states in order to serve the Israeli project.”

Abu Amer added, “The policies adopted by the Russians and Americans are completely different. The Russians are trying to preserve the unity of Arab countries and put an end to the IS expansion. There had been historical relations between Russia and the Palestinian people, which pushes it [Russia] to play a key role in settling the Palestinian issue and the Arab-Israeli conflict, since it is a member of the Quartet and is unsatisfied with the US policy toward the Middle East.”

Palestinians seem to be optimistic about Abbas' visit to Moscow, as they see Russia is making remarkable steps to engage in regional issues again, especially in light of its growing influence and military presence in the Syrian territories and its rapprochement with Egypt. This is especially true as Russia seems to have played a role in reaching a nuclear deal between Iran and the international community to keep Tehran as an ally of Moscow, while inviting the Hamas leadership to visit Moscow in early August.

Ahmad Majdalani, a member of the PLO Executive Committee, said Sept. 22 that Palestinians hope the visit also will result in Russia supporting Abbas when he speaks before the United Nations on Sept. 30. Abbas is expected to affirm Palestinian efforts before the International Criminal Court to hold Israeli leaders accountable for their crimes against the Palestinians, to declare a Palestinian state under occupation and to make Israel responsible for managing the living and security conditions in the West Bank as an occupation force.

Al-Monitor got hold of a report — prepared by Palestinian diplomatic forums to assess Abbas' visit, which was issued after the visit concluded — that stated “Abbas' visit to Moscow has gained importance, with Washington’s fallback in the region and the beginning of a Russian vigilance toward it. This may constitute an opportunity for the Palestinians to take advantage of this, in an attempt to lure the vital Russian role in the peace process, along with the American and European roles. This is because Russia has returned to play an active role in regional issues and international politics. It is able to get the peace process going and impose its conditions, as Washington is starting to retreat from it [the peace process].”

Abbas' visit to Moscow was covered by Russian media, which published on Sept. 23 some of his talks with Putin and called the visit an invitation for Russia to play a role in resolving the region’s issues. In addition, the media mentioned Palestinian-Russian trade, which grew in the first half of 2015, while Moscow continues to provide financial assistance to the Palestinian Authority.

It is noteworthy that Abbas’ recent trip to Moscow was his third this year. He visited Russia in January and again in April to discuss bilateral relations, Russia's involvement in negotiations with the Israelis and getting rid of US sponsorship of the negotiations. These visits inspire Palestinians to believe Russia will support them in the face of Israeli stubbornness.

However, some Palestinian officials expressed their concerns. One official told Al-Monitor on condition of anonymity that he does not believe Abbas’ visits will result in Russia fulfilling its promises to Palestinians. He noted that Russia is preoccupied with other foreign matters such as the Ukraine crisis, the Iranian nuclear deal and the Syrian crisis.

On Sept. 22, Russia and Israel reached an understanding about the Russian military presence in Syria, which may force Moscow to engage in political deals with Washington — which could come at the expense of Palestinians.