The Palestinian leadership appears to have decided to direct its diplomatic efforts toward the United Nations and The Hague now that the United States has openly displayed its bias in favor of Israel. 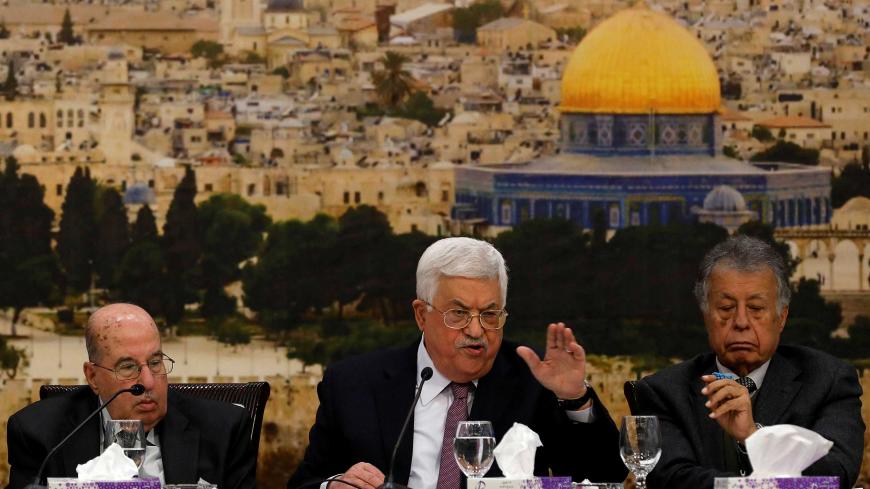 Palestinian President Mahmoud Abbas made it absolutely clear during his epic two-hour speech to the Palestinian Central Council (PCC) that the US-led track for negotiating with Israel is no longer acceptable to the Palestinians. He also told the 80-member PCC assembled in Ramallah on Jan. 14 that he will not support military or anti-Israeli armed attacks, expressing his preference for diplomatic and peaceful popular resistance.

While speaking in favor of popular struggle and expressing continued support for the need for dialogue with the Israelis, it was clear that Abbas’ preferred and most-trusted diplomatic approach is the international track. This is where Palestinian power exists, as seen when 128 UN member states defied US pressure and voted in support of Palestine to uphold the status of Jerusalem at the UN General Assembly on Dec. 21, 2017, after the US administration of President Donald Trump recognized the city as the capital of Israel on Dec. 6.

At the meeting, Abbas repeatedly praised Palestine’s UN mission and mentioned Ambassador Riyad Mansour three times in his 6,000-word speech, revealing his clear preference for multilateral and international diplomacy instead of continued US monopolization of the peace process, given that the Trump administration has exposed its bias by offering unilateral support to Israel, in particular on the issue of Jerusalem.

Feda Abdelhady-Nasser, deputy representative of the Permanent Observer Mission of the State of Palestine to the United Nations in New York, told Al-Monitor, “On the basis of international law, and using the international instruments at our disposal, we can do a lot to safeguard the rights of the Palestinian people until we can realize those rights, whether in terms of the right to self-determination and independence or the rights of the Palestine refugees, as enshrined in UN resolutions.”

Abdelhady-Nasser said that the US veto at the UN Security Council on Dec. 18, on a vote rejecting any change in the status of Jerusalem, does not reduce the rights and opportunities available to Palestinians. “A resolution passed in 1980 is as equally valid as a resolution passed in 2016,” she noted. “Our job remains to safeguard [Palestinians’] rights, even while we are in the middle of a storm, and to continue to seek all opportunities to advance the realization of those rights and to alleviate the plight of our people pending the achievement of a just solution.”

As part of a hard-working cadre at UN headquarters, Abdelhady-Nasser said that Palestine's team in New York will not stop in the effort to bring an end to the Israeli occupation and secure Palestinian rights, no matter the obstacles. “We are working very hard to make sure the UN member states adhere to international law and their own obligations in accordance with the commitments they have made in UN resolutions.”

As for the period ahead, she noted an important upcoming meeting at the UN Security Council. An open debate will take place Jan. 25 on the Palestinian issue, with speakers from dozens of countries expected to voice their positions. It will be the first chance in 2018 to gauge where many countries stand, Abdelhady-Nasser said.

“Of course, we are hoping and advocating for clear reaffirmations of long-standing positions and principles of support for the Palestinian people, including on the issue of Jerusalem, UNRWA [UN Relief and Works Agency] and other critical issues at this moment,” she remarked. Once a determination is made as to where different countries stand, Abdelhady-Nasser said, the Palestinian leadership can then determine how and when to move ahead on certain issues.

In response to questions regarding the possibility of advancing Palestine's application for full membership to the United Nations, she stated, “Our job is to give voice to the rights of the Palestinian people in our daily engagement at the UN as we seek to advance our just cause and fulfill our legitimate national aspirations. We have to work hard to ensure the support of countries and avoid unnecessary setbacks.”

An earlier attempt to vote on Palestinian statehood, on Dec. 30, 2014, failed to garner the minimum nine votes in the Security Council, relieving the United States of having to cast a veto.

Abbas in his PCC speech also referred to the possibility of pushing the International Criminal Court (ICC) to initiate investigations into alleged Israeli war crimes. The court can only initiate investigations if the Security Council requests that it do so or if the ICC prosecutor decides to initiate such an investigation. On Jan. 18, Palestinian Foreign Minister Riyad al-Malki wrote to the ICC prosecutor, Fatou Bensouda, reminding her that Palestine, which joined the ICC three years ago, had submitted the necessary materials but that no investigation into Israeli actions has been launched.

Judging from the tone and content of Abbas' speech, the Palestinian leadership appears to have decided to direct its efforts toward New York and The Hague, rather than Ramallah and Washington. It is not clear whether this effort will yield any results in the face of right-wing Israeli and US leaderships.

Progress at the United Nations and the ICC will most probably be slow, and it is highly unlikely that Israel will pay much attention unless these international bodies put some teeth behind their resolutions.