The Israeli ruling Likud Party has voted on a decision to annex the settlements in the West Bank to Israel, raising the anger of Palestinians who threatened to take the matter to international courts. 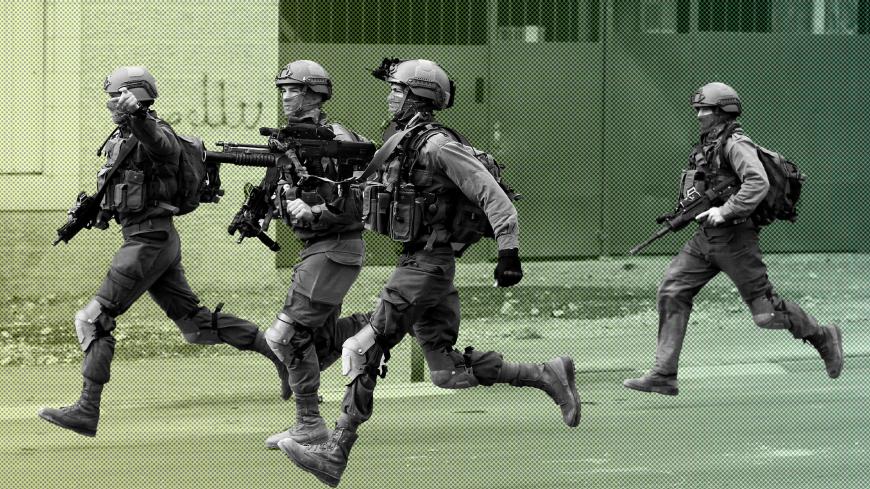 Israeli soldiers run during clashes with Palestinians at a protest against US President Donald Trump's decision to recognize Jerusalem as the capital of Israel, Bethlehem, West Bank, Dec. 20, 2017. - REUTERS/Mussa Qawasma

Two major themes are emerging in the aftermath of the Dec. 6 statement by US President Donald Trump recognizing Jerusalem as Israel’s capital. Trump’s statement has opened the floodgates of Israeli expansionism, and Israel is now clearly marching toward becoming a full-fledged apartheid state.

Palestinian officials and a number of Israeli pundits and peace movements have argued that radical elements in the Israeli government have picked up the signals coming from Washington that they can do what they want without having to worry about US or international restrictions.

The ruling Likud Party's Central Committee unanimously endorsed Dec. 31 a resolution calling for the annexation of West Bank settlements, sending a tough message to the Palestinians in the wake of Trump's recognition of Israel's capital.

Nasser Laham, the editor-in-chief of the independent Maan news agency, said in a column published Jan. 1 that the Likud decision has set the stage for theft of Palestinian lands. “Settler companies and Jewish terrorists have been given a wide-open opportunity to steal whatever is left of Palestinian lands, waters, mountains and valleys,” he wrote.

According to Laham, what is happening presently is reminiscent of what happened in the 1933-36 period during the British Mandate of Palestine. “At that time, Britain (today’s United States) was fighting the Palestinian people on the one hand, while arming the Jews and helping them control land, airports and seaports on the other.”

Israeli columnist Gershom Gorenberg said in his Jan. 3 article on The American Prospect site that the Likud resolution will greatly speed up settlement annexation efforts under the larger call for annexation of all the West Bank. “The narrower reading actually shows the true intent: annex the settlements; leave Palestinian communities subject to Israeli rule without making the Palestinians citizens.”

Gorenberg continued that the Likud is making the Israeli goal very clear: “It's a call to transform de facto occupation into de jure apartheid.”

The overwhelming decision by members of the Likud Central Committee ordering its members to work toward annexing the occupied territories has provided Palestinian leaders with a new charge to be added to the case that is expected to be presented in the International Criminal Court (ICC).

The crime of apartheid has been defined in the 2002 Rome Statute of the ICC as “inhumane acts of a character similar [to other crimes against humanity] committed in the context of an institutionalized regime of systematic oppression and domination by one racial group over any other racial group or groups and committed with the intention of maintaining that regime.”

Paul Eden, a law professor at the University of Sussex, writing in the Law Explorer in October 2015, argued in a long legal paper the applicability of the apartheid crime in the Israeli-Palestinian conflict.

If Israeli practices were considered apartheid in 2015, they will undoubtedly be so if the Likud efforts succeed in annexing all or parts of the occupied territories. Palestinian President Mahmoud Abbas picked up on this international legal issue.

In response to the decision of the ruling Israeli party to annex the Israeli settlements in the occupied West Bank to Israel, Abbas said that this would be one of the issues to be decided upon in the upcoming Palestinian Central Council meeting due to take place in Ramallah Jan. 14. “We shall make important decisions during 2018, including regarding legal venues, in order to hold Israel accountable for its grave and systematic violations of international law, and to revisit agreements signed with Israel,” Abbas said in a press statement Jan. 1.

He said the Likud's decision, among others, “could not be taken without the full support of the US administration, which has refused to condemn Israeli colonial settlements as well as the systematic attacks and crimes of the Israeli occupation against the people of Palestine.”

Abbas continued, “We hope that this vote serves as a reminder for the international community that the Israeli government, with the full support of the US administration, is not interested in a just and lasting peace. Rather its main goal is the consolidation of an apartheid regime in all of historic Palestine."

The Palestinian president’s statement concluded that the Palestinians will not accept “to live as slaves,” in reference to the potential of the full apartheid situation that would result if the Likud calls are implemented.

The Israeli government and Prime Minister Benjamin Netanyahu have denied any plans to annex the occupied territories. Netanyahu was not present when the annexation call was voted on.

But Netanyahu’s senior party members enthusiastically supported the vote. “We are telling the world that it doesn’t matter what the nations of the world say,” Public Security Minister Gilad Erdan told the 1,000-strong Likud Central Committee. “The time has come to express our biblical right to the land,” Erdan said.

Yousef Jabareen, a Palestinian member of the Israeli Knesset, has described the Likud Party’s decision to annex Area C of the occupied West Bank as representing “Israeli apartheid.” Jabareen, a member of the Law and Justice Committee in the Knesset, reacted Dec. 31 to the Likud decision by recalling that Palestinians accepted the two-state solution as part of the Arab Peace Initiative, and instead get annexation decisions. Such an annexation establishes an apartheid system, which gives the Palestinians some degree of autonomy in the major Palestinian cities. “This is similar to the South African Bantustans [under apartheid white rule].”

In the United States, Americans for Peace Now — a support group to Israel’s Peace Now movement — also responded angrily to the Likud decision arguing that with such a move, Israel opens itself up to charges of apartheid. “In practice, Israel has extended many of its laws to settlers in the West Bank, but has done so through military orders, thus maintaining the facade of a separate legal regime there. Once that facade is removed, American Jews will find themselves with little grounds for defending Israel against charges of apartheid,” Americans for Peace Now said in a statement Jan. 3.