Talks about annexing the Jordan Valley raise concerns amid Arab Knesset members that the Blue and White party is veering right. 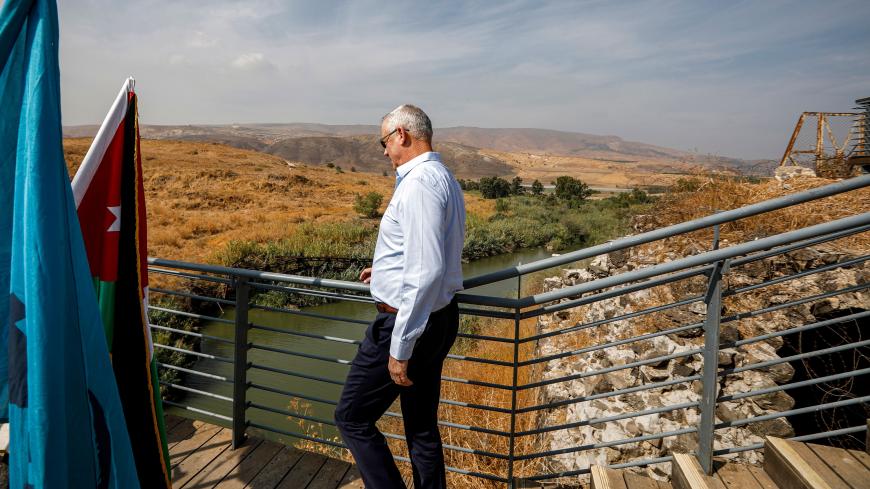 Retired Israeli Gen. Benny Gantz, one of the leaders of the Blue and White (Kahol Lavan) political alliance, visits the Jordan Valley site of Naharayim, also known as Baqura in Jordan, east of the Jordan River, which has been leased to Israel as part of the Israel-Jordan peace treaty, Oct. 18, 2019. - JALAA MAREY/AFP via Getty Images

Whether or not it's an election campaign spin by Prime Minister Benjamin Netanyahu, Israel’s Jordan Valley annexation initiative is already on the table. Netanyahu, as I wrote previously, is promising to annex the land after the elections in order to kill two birds with one stone. The first is to please the settlers, for whom annexation of the valley is a precursor of future Israeli sovereignty over Area C of the West Bank and even more. The second is to set a trap for the opposition Blue and White party: If its members oppose the annexation, they would be publicly condemned as leftists willing to abandon land that lies at the heart of the Israeli consensus, and if they support it, they will lose the potential support of the Joint List — the unified slate of predominantly Arab parties.

Netanyahu’s Jordan Valley annexation pronouncements have generated concern among Israeli security officials as well as in Jordan and the international community. Channel 12 News reported on Dec. 3 that Israeli security officials have warned Netanyahu that the move could jeopardize the 25-year Israeli-Jordanian peace treaty. According to the report, senior defense officials believe if Israel imposes sovereignty over the Jordan Valley, Jordan’s King Abdullah II would have no choice but to suspend the peace treaty under heavy Jordanian public pressure. This kind of pressure is what recently led Jordan to demand Israel hand back the two border enclaves of Tzofar and Naharayim that it had leased from Jordan under the terms of the peace agreement.

In a Dec. 5 annual report, International Criminal Court (ICC) prosecutor Fatou Bensouda also expressed concern not only over Netanyahu’s intentions and declarations but also over the reaction by Blue and White, which Netanyahu had managed to snare in the annexation trap. Senior Blue and White Knesset member and former Defense Minister Moshe Ya’alon tweeted on Dec. 2 that a national unity government led by party chief Benny Gantz could carry out such annexation within less than five months.

These comments and declarations have raised suspicions among members of the Joint List that Blue and White might actually be masquerading as a centrist party when it is, in fact, a Likud party clone that believes there is no real alternative to a right-wing regime in Israel. Joint List Knesset member Yousef Jabareen tweeted on Dec. 2 that two Blue and White Knesset members ideologically affiliated with the political right, Zvi Hauser and Yoaz Hendel, are competing with Likud over which party will be the first to annex the Jordan Valley. “Annexation is a war crime, and [the] Joint List will fight any decision that perpetuates the occupation,” Jabareen stated.

In an interview with Al-Monitor, Jabareen said the identical declarations by the two major factions raise grave concern within the Joint List that they intend to form a national unity government instead of a center-left government following the next elections in early 2020, which appear inevitable. Jabareen said Netanyahu’s Likud cannot annex contested territories on its own, and in order to do so, it needs a broad-based government. “According to the talk and nuances we hear, Blue and White appears to be veering to the right and aligning itself [with the annexation],” he said.

Jabareen added that if that is the case, Gantz and his faction will not be able to count on the support of the Joint List — an option seriously discussed following the September elections. “There was talk all along the way of our external support to enable the formation of a different kind of government, but this will not happen given the annexation intention and masquerading as Likud II,” Jabareen said.

He reminded us that the Joint List — the Knesset’s third-largest faction — wields significant power both in the domestic political arena and in the international one. “You cannot ignore the power of 13 Knesset members,” he said, referring us back to 1995 when the predominantly Arab Hadash Party supported the government of Yitzhak Rabin but threatened a vote of no confidence in the Knesset when it turned out that Rabin was planning to authorize construction of the Jewish Har Homa neighborhood in East Jerusalem. “The threat helped and the government rejected the idea,” he said.

Nonetheless, the Joint List realizes that efforts to foil the annexation would be more effective with the help of international pressure. According to Jabareen, with the growing Israeli consensus on applying Israeli sovereignty to the Jordan Valley, creating international pressure on Israel would be the only effective way to thwart a measure so destructive to future prospects of peace with the Palestinians based on the principle of two states for two people.

The announcement by the office of the ICC prosecutor in The Hague appears to be part of such pressure. It began with the joint Sept. 13 statement by France, Germany, Spain Italy and the United Kingdom on the eve of Israel’s last elections, expressing concern over the very discussion of the Jordan Valley annexation and arguing it would violate international law.

Jabareen claims that the formation of the Joint List and its electoral success provides its 13 lawmakers with a strong presence on the international stage that they will use, if need be, to thwart the annexation initiative. “As a political force, people treat us more seriously,” he said, adding, “Not only as those representing 1.5 million Palestinians but also as a voice opposed to the Jewish consensus that constitutes the majority.”

Jabareen said his fellow lawmakers are awaiting completion of the top round of appointments within the EU institutions in the wake of the European Parliament election and are planning to meet with the officeholders and update them. The agenda of the March 2020 session of the United Nations Human Rights Commission in Geneva includes discussion of the status of Israel’s Arab citizens in light of the 2018 Nationality Law that deepens their discrimination, and of the steps Israel is taking to distance resolution of the Israeli-Palestinian conflict as far and long as possible. These discussions, Jabareen said, support the Joint List contention that Israel is seriously considering the annexation. “We are contributing [to the UN commission] the data to which we are exposed as Knesset members,” he added.

Jabareen laughed when asked whether passing on information to foreign officials does not buttress accusations by Yisrael Beitenu leader Avigdor Liberman that Israel’s Arab lawmakers are a fifth column. “We are talking about open source information, speeches by Knesset members on the right and things they say in public,” Jabareen said. “Most of them are aired on the Knesset Channel. The difference is that we understand nuances. For example, the things Israeli officials tell the heads of the EU or other world leaders are different from what is said in the Knesset.” The right-wing Knesset members, he said, do not only have annexation of the Jordan Valley in mind. “They go as far as talking about annexing [West Bank] Area A,” which is under Palestinian Authority control, Jabareen claimed.

At midnight on Dec. 11, we will know whether Israel is, in fact, heading for third elections. The Joint List believes another round of voting could boost its Knesset faction by two and perhaps three members. That would be a significant political step up for Israel’s 21% Arab minority, whose Knesset members intend to fight for their improved civil standing and serve as gatekeepers against the annexation intentions. Once upon a time, annexation was a fantasy entertained by the radical right; now it verges on a consensual issue for the state’s Jewish majority.