The Blue and White leadership has changed its strategy and is now welcoming an early publication of the Donald Trump administration's peace plan. 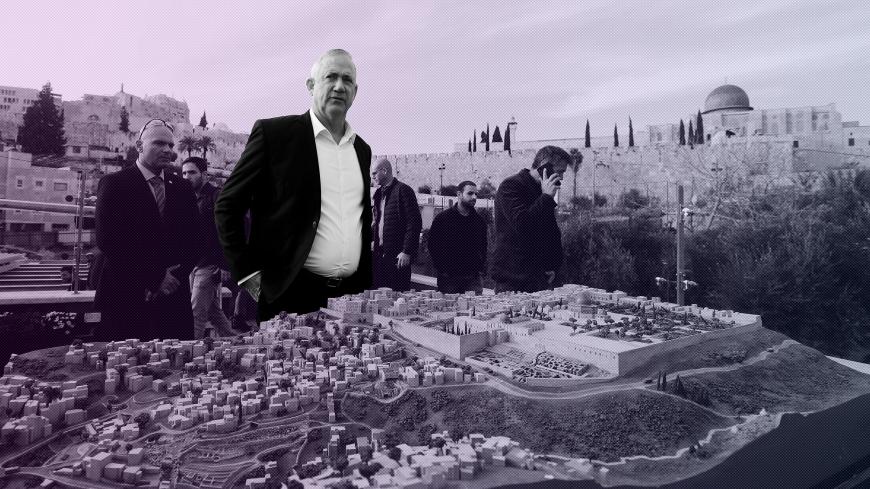 Benny Gantz, leader of Blue and White party, stands behind a model of Jerusalem's Old City and surrounding areas as he tours "The City of David," a Jewish heritage site in Silwan, East Jerusalem, Jan. 14, 2020. - REUTERS/Ammar Awad

Only a little more than a week ago, Benny Gantz stated at a Jan. 8 press conference that he couldn’t even imagine that the Americans would disseminate President Donald Trump’s “deal of the century” prior to Israel’s elections. And, Gantz added, should that actually happen, it would constitute harsh interference in the electoral process in Israel. But Gantz made an elegant about-face Jan. 21. He loudly announced, “I hope the president will move up [the rollout] and I expect the plan will be released very soon. Several weeks have passed. A lot of dramatic things are happening in the Middle East, and I look forward to the publication of the plan.”

According to Al-Monitor’s check, Gantz did not change his stance so drastically because of American pressure. Instead, he had received reliable intelligence information from sources in the United States that President Trump is serious and is examining the option of publicizing the program before elections. Gantz was told by a source knowledgeable of the inner workings of the US administration that “Netanyahu is pressuring the president to publicize the program in the coming weeks,” according to a Blue and White source. “It is not yet clear whether Trump will be able to resist this pressure. The chances are high that the plan will be publicized before elections.”

Gantz convened the leadership of the Blue and White, including the two former chiefs of staff, Gabi Ashkenazi and Moshe Ya’alon, plus Yair Lapid. Their chosen strategy is the direct opposite of their past strategy: Instead of clashing with Prime Minister Benjamin Netanyahu and his government regarding the diplomatic plan, they will now align themselves with the plan and “go with the flow.” Thus, almost overnight, Gantz, who opposed publicizing the peace program, now calls for its publication at this time, without delay.

Blue and White seniors hope their decision will minimize the conflicts likely to break out after the plan is publicized. This way, they are hitching their wagons to that of President Trump, one of the most all-time popular US presidents in Israel. “This program will evidently be good for Israel,” another senior Blue and White official told Al-Monitor on condition of anonymity. “There’s no way that we can say no, it’s clear that Netanyahu will say yes. So we’ve beat him to it; we’re making it clear that we’re behind the president.”

This way, the Blue and White strategists hope that Netanyahu will find it difficult to keep repeating his main campaign message, based on his personal alliance with Trump. “It’s true that Netanyahu and Trump are close,” says one of Blue and White’s campaign managers, “but Gantz and Trump are not far apart either. We’re also behind any decision that will be made regarding his peace program.”

Nevertheless, this diplomatic development is not beneficial to Blue and White, to put it mildly. The presentation of the American peace plan in the coming weeks, before the March 2 elections, will allow Netanyahu to change Israel’s public agenda on the cusp of elections. Instead of the battle for his immunity, in which he faces defeat, Netanyahu is now in his element: The diplomatic front was always his forte. He now enjoys a clear advantage over his rivals. “Instead of immunity, we’ll talk sovereignty,” one of the prime minister’s close associates told Al-Monitor on condition of anonymity. “Netanyahu loves to talk about this issue; he has absolute control over it, and that’s good for us.”

The problem of Blue and White is that this change has already begun — and the ones responsible for the turnabout in Israel’s public agenda toward Netanyahu’s side are no other than the heads of Blue and White. It happened Jan. 21, on a tour that Gantz conducted in the Jordan Valley — a dusty plot of land that people have forgotten is actually part of the West Bank. It was conquered by the IDF (Israel Defense Forces) in the Six Day War. Gantz did an about-face on this issue, too, and instead of downplaying Netanyahu’s “annexation fever” regarding the Jordan Valley, which had begun even before the elections last September, Gantz raised the ante and loudly proclaimed that he, too, is in favor of a quick annexation of the Valley. He did this following a statement made by Yamina senior Bezalel Smotrich, the most extreme right-wing member of Netanyahu’s coalition, who announced Jan. 20 that he would submit a bill for an immediate annexation of the Valley. Here, too, Gantz worried about finding himself stuck in the left facing a right-wing coalition and Netanyahu with his annexation plans. So, he decided to jump the gun.

But this time, it blew up in Gantz’s face. After he made his declaration about annexing the Jordan Valley to Israel after elections, Gantz received an immediate answer by way of a Netanyahu tweet: “Why wait until after elections, if it’s possible to impose sovereignty on the Jordan Valley right now, with broad agreement in the Knesset? Benny Gantz, I expect your answer this evening, unless of course Ahmad Tibi [Arab Joint List party senior] hands you a veto.”

In fact, Netanyahu was quick to realize that Gantz had dug himself a hole, so he hurried to push the Blue and White chairman into it. That is how Gantz found himself tied to a process that could turn out to be catastrophic for Israel. Why? Because Gantz, like the other former chiefs of staff in his party and like Netanyahu, all know full well that annexation of the Jordan Valley has no real strategic significance at this stage. Instead, it constitutes a real political danger, as it could rip the peace agreement with Jordan to shreds.

The Jordan Valley, unlike the West Bank, contains only a few thousand Israeli residents. It is viewed as Israel’s eastern security border, but any official annexation without accompanying peace agreements would turn the entire Middle East against Israel. It would undermine the bloc that Israel is trying to create, in response to the “Shiite banana” (or Shiite influence zone) extending from the Gulf and Tehran, up to Tartus in Syria and the shores of the Mediterranean.

Afterward, to minimize the damage, Gantz tried to correct things and noted that he would only annex the West Bank as part of a strategic plan in coordination with the international community. Gantz clearly knows there is no such animal at the moment and no such global commonwealth that would approve this kind of annexation. On the other hand, he knows that Netanyahu would not hesitate to annex what he can, including Tehran itself, if it would help him win the elections.

Thus, this week Gantz actually helped Netanyahu turn the media agenda on its head, to bury the immunity issue in the basement and raise the sovereignty and diplomacy issues to the headlines. Gantz needs to hope that next week will be a better one for him.