Prime Minister Benjamin Netanyahu might prefer that President Donald Trump’s peace plan be published ahead of the elections, but Blue and White seniors say this won’t become a game changer. 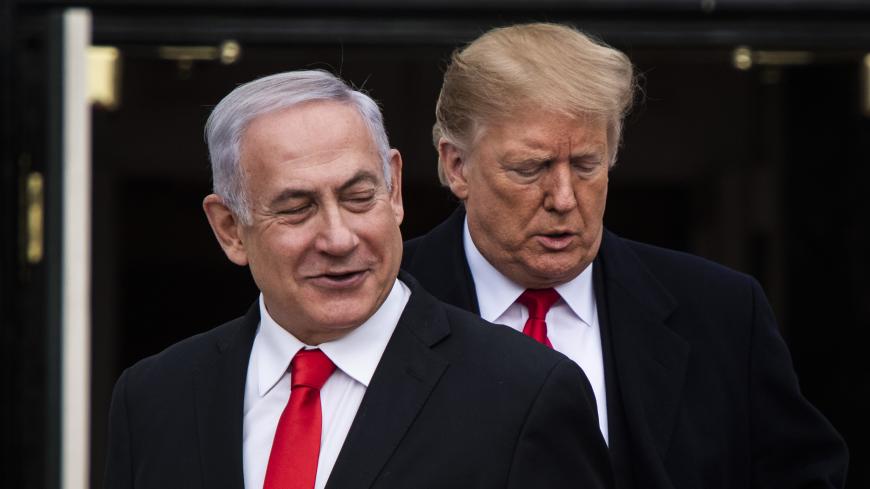 Will US President Donald Trump once again come to the aid of Israeli Prime Minister Benjamin Netanyahu ahead of the elections? This burning question has been dumped in quite a few political laps in Israel, especially that of the Blue and White party’s chair and candidate for the premiership, Benny Gantz. Persistent reports according to which the US administration is considering presentation of what has been dubbed its "deal of the century" for Israeli-Palestinian peace prior to the March 2 elections are generating heavy headaches for the opposition party’s leadership.

Initially, Gantz expressed sharp criticism of the reported American intention, but the White House did not appear overly bothered. Blue and White then decided to adopt a lower profile and to avoid addressing the issue. Outspoken criticism of presenting the blueprint before the elections is being reserved for private talks and behind-the-scenes measures. “The last thing we need now is a clash with the [US] administration, which would highlight the affinity between Trump and Netanyahu. We are hoping the administration does the right thing, meaning that it does not carry through with its intention and avoids blatant intervention in Israel’s political process. And if Trump goes ahead with the plan, anyway? Then we will have to formulate an alternative approach,” a senior Blue and White source told Al-Monitor this week on condition of anonymity.

It all began a little over a week ago, with reports that the White House was mulling presentation of the peace plan, which has been in the making for some three years, prior to the Israeli elections. Gantz, asked about it at a Jan. 8 news conference, gave a sharp and penetrating answer. “I can assume that on such an important matter the Americans would be careful and not publish it before the election, because that would be outright blatant intervention in the State of Israel's election process," he said. Gantz associates believed that this clear-cut declaration would convey the necessary message to the White House and remove the issue from the agenda. “Publication of a dramatic peace plan a minute before elections is simply not done,” a senior Blue and White source told Al-Monitor on condition of anonymity at the time. “We do not believe the Americans could do such a thing.”

A short while later, it turned out that the Americans actually could. Even before Gantz’s decisive comments, the special US envoy on Middle Eastern peace talks, Avi Berkowitz, was dispatched to Israel on Jan. 7 for a series of meetings, including one in Jerusalem with Netanyahu himself. The content of the talks has not been revealed. According to diplomatic sources in the know, Berkowitz is now busy with “final changes and formulation” of the Trump peace plan. He also met with Gantz, and the contents of that meeting, too, remains unclear. Sources exposed to the talk between the two say Gantz expressed strenuous opposition to a rollout of the peace plan before the elections.

Blue and White regard O’Brien’s comments as dictated by the Oval Office, meaning Trump was not impressed by Gantz’s opposition and is, indeed, weighing an unveiling of the plan before March 2. Gantz and the other Blue and White leaders will have to decide what’s next. Should they keep up their criticism of the White House and exert pressure, or let go? The decision for the moment is to stand by. An official question I directed on Jan. 16 to Blue and White did not elicit a firm response either way, but the previous criticism has disappeared. “Right now, we are not relating to this,” another Blue and White source told Al-Monitor on condition of anonymity. “We will deal with each decision when the time comes.”

It should be noted that some senior Blue and White figures are not exercised over the possible rollout of the US plan before March 2.

Their main concern is that the move could help Netanyahu divert voters’ attention away from his corruption indictment and his attempts to secure Knesset immunity from prosecution (an affair that has severely tarnished his image and caused him heavy electoral damage), toward an arena much more comfortable for the prime minister. In other words, the publication of the plan would divert Israeli public attention toward domains that Netanyahu masters well and faces practically no criticism: A diplomatic plan from the White House, the closeness of Netanyahu to Trump and perhaps a few bonuses and goodies thrown into the deal, such as US approval for Israeli annexation of the Jordan Valley if Israel responds to the blueprint in the affirmative.

Blue and White’s problem is that it cannot afford to engage in a clash, even a marginal one, with the US administration. Such an incident could hone the distinct advantage Netanyahu enjoys in everything that has to do with the Trump administration. That was why Blue and White decided to lay low and avoid a public confrontation with the administration. Blue and White is using back channels to ensure that the administration is aware of Gantz and friends’ vehement opposition to such intervention in the political process. Publicly, they are silent. “Let us not exaggerate,” a top Blue and White member told Al-Monitor on condition of anonymity. “Netanyahu has run out of magic and even presentation of the plan will be perceived as yet another trick that no longer works with the Israeli public. If Netanyahu says 'yes' to the plan, Blue and White will clearly welcome it too. With all due respect to the president and his administration, we do not see this as the game changer Netanyahu is hoping for. We will not give him the pleasure of seeing us squabbling with Trump. The state will go on after Netanyahu too, and will have excellent relations with the White House after him too. Everything is fine.”