Israeli security tops fear that instead of bringing peace, the plan of US President Donald Trump would escalate tensions with Palestinians and bring closer Hamas and Fatah. 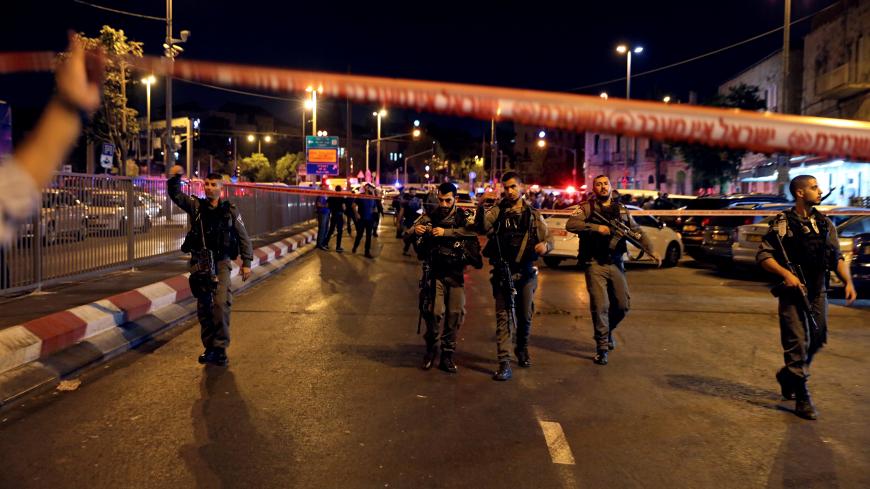 News broke Jan. 23 that US President Donald Trump planned to unveil details of his “deal of the century” for Israeli-Palestinian peace five days hence, on the day the Knesset was to vote on forming a committee to debate Prime Minister Benjamin Netanyahu’s request for immunity from prosecution. Initially, most references to the plan were political in nature. Trump’s move appeared to be a blatant intervention in Israeli elections. It would have been far more appropriate to present the plan after the March 2 elections and subsequent formation of a new government. The political context was further underscored by the surprising White House invitation to Netanyahu’s rival, Blue and White party Chair Benny Gantz, whose acceptance meant absenting himself from the crucial Jan. 28 Knesset debate. When US Vice President Mike Pence mentioned, perhaps unintentionally, that Gantz had been invited to Washington at Netanyahu’s request, the political overlay was even clearer.

The sense in Israel, in general, and particularly among the Blue and White leadership, was that Netanyahu and company had engaged in a political ploy, setting a trap to help Netanyahu’s reelection prospects and hurt Gantz. By asking to meet separately with Trump on Monday, Jan. 27, so he could get back to Israel immediately for the Knesset vote, Gantz somehow emerged unscathed from the ambush. Gantz’s need for this move reflected beyond doubt that the timing of the plan’s unveiling was, indeed, an “election show.” So as not to be upstaged, Netanyahu was quick to arrange a meeting with Trump on Monday, just ahead of the Gantz White House meeting, of course, in addition to his previously scheduled one on Tuesday. For many Israelis, these maneuvers simply illustrate that the US plan is a political game unlikely to lead to a peace agreement.

Following their meetings with Trump, the “two good competitors,” as Trump described Netanyahu and Gantz, issued praise for the president’s courage and hailed the feasibility of a historic agreement with the Palestinians. However, they seemed more concerned with the effect of the plan’s unveiling on the upcoming elections, and until then, everyone will play along. That is not the case with Israel’s defense agencies.

Publication of the US blueprint, which has been in the works for two years, is expected at 7 p.m. in Israel (noon in Washington) in the presence of Trump and Netanyahu. In other words, in the presence of one side only, in the absence of the Palestinians. In fact, the Palestinians regard this decision as a humiliating slap in the face. Meanwhile, calls on the Israeli political right for immediate implementation of the plan (even before its details are revealed) by annexation of West Bank territories, and on the other hand rage and frustration in the Palestinian Authority (PA), do not bode well.

A former top Israeli security official told Al-Monitor that during his many years in the field, the accepted premise was that the more the Palestinians despair over the lack of hope for an independent state, the greater their motivation for escalation. “This is an undisputed equation,” he said on condition of anonymity. “The peace agreement with Egypt and the historic visit by President [Anwar] Sadat in Jerusalem only occurred after the [1973] Yom Kippur War that wiped out the humiliating defeat in the [1967] Six-Day War. Egyptian honor was restored, and talks on an agreement could begin.”

With his deal of the century, the source said, Trump was behaving like an aggressive businessman, exerting pressure on the other side — the Palestinians — without giving it any choice. “This shows a basic lack of understanding. When working on an explosive diplomatic process, so complex and sensitive, humiliating the other side achieves the exact opposite. Honor plays the most important role in such cases, not only in the Middle East,” he added.

At his Jan. 27 White House meeting with Netanyahu, Trump noted that he had already slashed funding for the Palestinians. Trump argued that once the Palestinians feel the effect of the cuts, they would accept the terms of his deal. “They are not living well. As you know, we cut off aid to the Palestinians, something I don't like to do, but we did that. And we think there is a very good chance they’re going to want this,” the president said. “It'll be a tremendous tribute to everybody. If we don't, life goes on.” But life is unlikely to go on as usual if Israel unilaterally annexes territories.

On Jan. 27, while Gantz and Netanyahu were conducting their festive White House talks, the Palestinian factions, including the leading Fatah movement, called for mass demonstrations throughout the West Bank and Gaza Strip. The organizing committee of the March of Great Return — a mass anti-Israel protest launched a year ago in Gaza — even announced the resumption of the demonstrations and marches. The call, stemming from despair and frustration, is perceived in Israel as green lighting violence, an initial spark that could result in escalation. Although the Palestinians are not talking in terms of a new intifada, growing despair generates a corresponding rise in motivation for terrorism and violence.

Another substantive point to consider, which is a direct outcome of the Trump plan’s anti-Palestinian bias, is the affinity it creates between the Gaza Strip and the West Bank, much to Israel’s displeasure. Israel is pleased, to put it mildly, at the prevailing deep rift between Hamas and Fatah and between Gaza and the West Bank.

The plan, according to early reports, proposes construction of a tunnel linking the Gaza Strip and the West Bank. The Trump administration is also demanding that the PA restore its control over Gaza and demilitarize the enclave. Trump views the regime of Palestinian President Mahmoud Abbas as a troublesome entity that must be forced to accept his plan. At the same time, the plan does not refer to Hamas and Islamic Jihad, which control Gaza, at all. As far as the blueprint is concerned, they do not exist as actors, and they have no influence on developments in the Palestinian arena. That not only makes the plan unrealistic and unworkable, it contradicts the Israeli interest in having two separate and divided Palestinian entities, and brings the reconciliation between Hamas and Fatah almost to the point of a union of forces.

The process of Palestinian reconciliation could intensify if Israel moves on to the execution phase of the plan and annexes settlements and territory. At that point, the violence could accelerate and the “two bad competitors” — Hamas and Fatah — could draw significantly closer. If this were a feasible peace plan, it would dwarf all these dangers. However, such is not the case given that no peace is likely to emerge from the deal of the century, only growing tensions, which could culminate in a clash.

At this point, no one in Israel’s defense agencies seems interested in raining on the Trump-Netanyahu parade. When the majority of politicians talk about a historic moment and the US president hands the Israelis the “plan of their dreams” on a silver platter, the generals prefer to keep their criticism to themselves and out of the public arena. But on the day Palestinian despair is translated into violence on the ground and blows up in Israel’s face, the generals will not be surprised.