The electoral politics of Trump's peace and propaganda in Israel

The Trump administration peace plan ignores the Arab Peace Initiative, the Quartet, the road map for peace, and foremost a true quest for peace between Israelis and Palestinians. 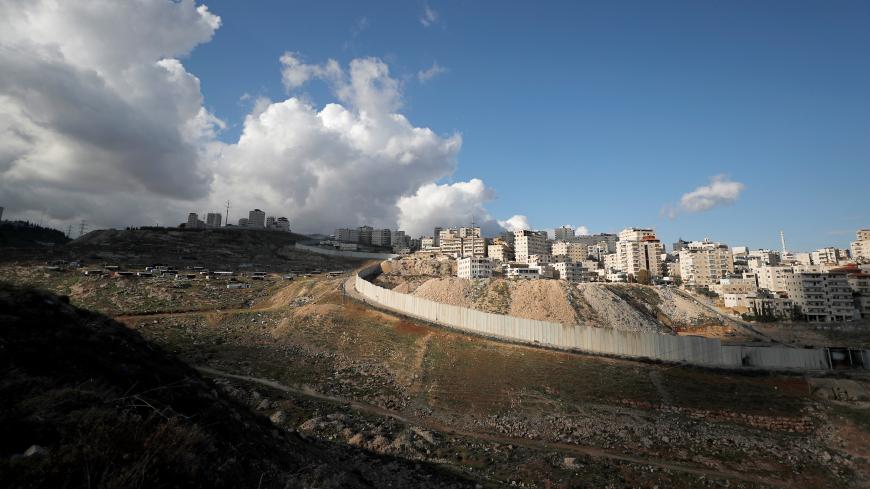 The Israeli separation barrier runs along the East Jerusalem refugee camp of Shuafat, an area Israel annexed to Jerusalem after capturing it in the 1967 war, Jan. 24, 2020. - REUTERS/Ammar Awad

Two words — “history” and “opportunity”— stand out in stark relief from the Jan. 25 public declarations by Israeli interim Prime Minister Benjamin Netanyahu on the eve of his departure for Washington: “I'm leaving for Washington …and I'm hopeful we can make history”; “An opportunity such as this comes once in history and cannot be missed”; “I am full of hope that we are on the verge of a historic moment in the annals of our state”; “I am leaving for Washington with a sense of great mission, of great responsibility and of great opportunity.” Netanyahu's political rival, Blue and White leader Benny Gantz, was more restrained and made do with using the word “historic” only once. The American blueprint, Gantz said at a Jan. 25 news conference in announcing that he, too, would travel to Washington to meet with President Donald Trump, was a “meaningful milestone, setting out the path for the sides to the Middle East conflict to march toward a regional, historic deal.”

Netanyahu was not exaggerating. This is the first time in the history of the Israeli state that such a blatant and obvious move has been undertaken to mobilize a foreign leader, Trump, for the election campaign of a ruling Israeli party, the Likud. Indeed, the political ploy known as the “deal of the century” was designed to provide a unique opportunity to remove Netanyahu’s corruption indictment from the headlines. Gantz managed to avoid this political trap that Netanyahu and his White House partners had set for him. Netanyahu’s talk about a “great mission” and “great responsibility,” and his warning that Israel must not miss out on this once-in-a-lifetime offer did not deter Gantz from another mission: his fight to ensure that the Knesset rejects Netanyahu’s corrupt request for immunity from prosecution.

Gantz will find it harder, however, to avoid the diplomatic honey trap set for him in Washington. The man who declared as recently as Jan. 21 that the Jordan Valley must be “an inseparable part” of Israel cannot get away without praising the US peace plan that includes the annexation of the Jordan Valley. His use of the words “significant milestone” to describe the plan was an evasive description that left him significant room for diplomatic maneuver. The more appropriate term to describe the American blueprint is not a “milestone” but a “millstone,” around the neck of peace lovers.

Gantz, who as army chief was privy to intelligence assessments, obviously knows that the hope he expressed that the Palestinians would “march toward” a plan based on the annexation of occupied territories and recognition of Israel as the state of the Jewish people is baseless nonsense. He presumably understands that an initiative that includes the elimination of the Arab presence from Jerusalem's Holy Basin is at complete odds with his desire to deepen Israel’s strategic partnership with Jordan, Egypt and other countries in the region and beyond.

Annexation of the Jordan Valley not only cheats the Palestinians of territory — some 30% of the West Bank — intended as a home for refugees, among them hundreds of thousands uprooted from the area in 1967 after the Six-Day War; it also constitutes a blatant violation of UN Resolution 237, adopted unanimously on June 14, 1967, and calling on Israel to facilitate the return of residents who had fled the West Bank, some 250,000 people, many of them refugees who had fled or were expelled from their homes in 1948 in what is now Israel and were thrown into refugee camps in neighboring countries, primarily in Jordan. Annexation also contradicts the 1978 Camp David Accords with Egypt, which call for a resolution to the issue of the Palestinians displaced in 1967. That document was of course signed by none other than a late leader of Netanyahu’s Likud, Menachem Begin.

Prior to taking off for Washington on Jan. 27, Netanyahu boasted, “Five years ago, I went to the US and the Congress, because I was forced to contend with a plan presented by an American president [Barack Obama], because I believed it would pose a threat to the State of Israel’s vital interests, essentially its existence.” What has happened since? Iran resumed its enrichment of uranium; the threat of regional war has grown; the United States' partners to the nuclear agreement refuse to sever ties with Tehran; and Democratic presidential hopefuls are waiting for Israel around the corner.

Netanyahu believes, or so he says, that the Trump plan “advances our most vital interests.” If Israel’s vital interests include perpetuating the conflict with the Palestinians, burying the 2002 Arab Peace Initiative and strengthening Iran and various terror organizations, Netanyahu is right. Even Trump realizes, however, or so he says, that Israel’s paramount interest is to remain a Jewish and democratic state. As reported by Channel 10 correspondent Barak Ravid, Trump remarked at an August 2018 meeting with Jordanian King Abdullah that if Israelis and Palestinians agree to a one-state solution to their conflict, within several years Israel might have a prime minister named Mohammed.

Trump’s annexation initiative, like his withdrawal from the Iranian nuclear agreement, also under Netanyahu’s inspiration, threatens Israel’s strategic interests vis-à-vis key players in the international arena. The duo’s new ploy is nothing short of a kick in the face of the Quartet, which includes, in addition to the United States, Russia, the United Nations and the European Union. It was a conservative Republican president, George W. Bush, who established the forum, not the Democrats Bill Clinton or Obama. Bush was also behind the road map for Middle East peace presented to the two sides in 2003 and brought by the United States to the UN Security Council for approval and adoption as Resolution 1515. The resolution is based on the road map's call for a permanent agreement between the sides that would include the establishment of a viable Palestinian state. A quick glance at the current map of the West Bank reveals that there is nothing farther from a state that can be considered “viable” in the American-Israeli ploy than the scattered Palestinian enclaves among the Jewish settlements. The road map principles also include the Arab Peace Initiative, based on Israeli withdrawal to the 1967 borders with agreed upon exchanges of territory.

In the remaining weeks before the March 2 Israeli elections, and the few months left until elections in the United States, Trump's peace plan will primarily serve the goal for which it was designed: election propaganda for Israel’s right-wing. The ill winds it generates in the West Bank and neighboring Arab states, however, bolsters the radical elements who have claimed all along that the only thing Israel understands is force.

The role of the opposition Blue and White and its potential allies from the political center and left wing will be to serve as a barricade to annexation. They must make a supreme effort to convince the Palestinians and Arab leaders not to throw the baby out with the bath water and persuade them that peace in the Middle East may be possible after the Trump-Netanyahu era.