Is Jordan Valley's annexation already on the way?

As Israel gears up for what could be the third round of elections in less than a year, a bill presented earlier in the month to annex the Jordan Valley has taken on a new urgency in light of the US announcement that it no longer views the settlements as illegal. 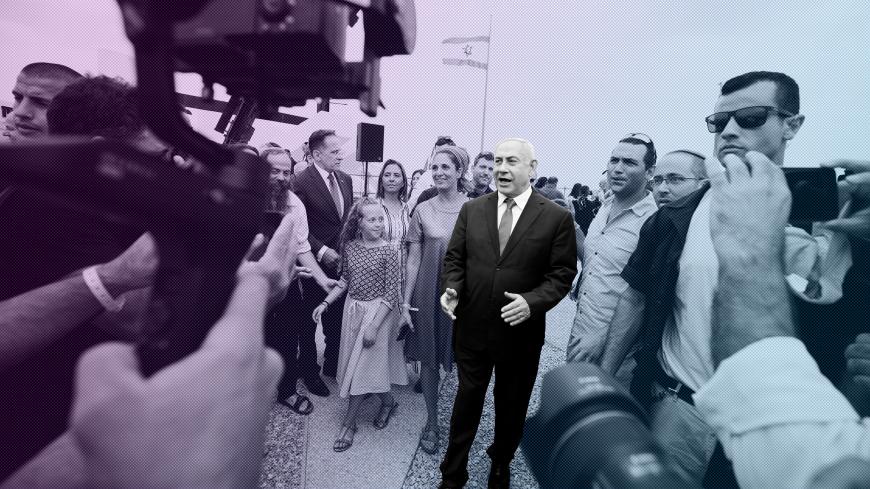 It looks like Israelis will, indeed, be returning to the voting booth for the third time in less than a year. On the night of Nov. 20, Blue and White Chairman Benny Gantz informed President Reuven Rivlin of his inability to cobble together a coalition in the time allotted to him. Thus, in the words of players on the political scene, the election campaign for the 23rd Knesset is just around the corner. Though the law dictates that the government mandate now go to Knesset members for 21 days — meaning that any of them can now attempt to recruit 61 signatures to form a government under his or her aegis — it is doubtful that anyone will succeed given that Prime Minister Benjamin Netanyahu and Gantz have already failed at the task.

The campaign for the next election is yet to get underway, but it is expected to be uglier and nastier than its predecessors. It most certainly will feature the indictments that Attorney General Avichai Mandelblit announced Nov. 21 against Netanyahu for bribery and other corruption-related charges. The annexation of the Jordan Valley is another issue expected to top the political agenda.

On Nov. 4, Knesset member Sharren Haskell (Likud) submitted a proposal for a bill to extend Israeli sovereignty over the Jordan Valley, but it received little attention at the time. Netanyahu and Gantz were engaged in a wrestling match, and no one wanted to deal with an annexation proposal uncertain to attract a majority in a disorderly Knesset. The political picture has since changed: Gantz failed to assemble a government, another election campaign is on the horizon, and suddenly Netanyahu is urging Haskell to promote her bill ASAP.

Haskell didn’t have time to digest Netanyahu's abrupt change in attitude before the prime minister tweeted his endorsement of an immediate annexation on Nov. 19. Thus, while Gantz was making his way to Jerusalem for a decisive meeting with Netanyahu in his chambers, a video in the prime minister's tweet was circulating, showing Netanyahu claiming that only a broad unity government could annex the Jordan Valley. At the same time, Gantz, it was alleged, preferred a narrow government with the Arabs.

“The historic decision of the American administration yesterday [Nov. 18] gives us a one-time-only chance to determine the eastern border of the state of Israel and annex the Jordan Valley,” Netanyahu proclaimed in the video. “This cannot be done by a minority government dependent on [Arab Joint List leaders] Ahmad Tibi and Ayman Odeh. Therefore, I call upon Benny Gantz to come together with me and with [Yisrael Beitenu leader] Avigdor Liberman to establish a unity government: The first item of this government, on the first day of the new government, is annexation of the Jordan Valley. The nation, and history, will not forgive anyone who squanders such a golden opportunity.”

Thus, armed with Netanyahu’s “historic decision” declaration, Haskell set to work on urging the Knesset’s Legislative Committee to quickly advance her bill. Under normal circumstances, a 45-day waiting period is required before a bill presented by a Knesset member can be brought up for a preliminary hearing. Despite this, the Likud wants it to happen within days.

New Right leader Ayelet Shaked is a challenger for credit for the annexation idea. When Shaked served as justice minister, she planted the first seeds for West Bank annexation together with her political partner, Naftali Bennett. Justice Minister Shaked pushed to impose Israeli law on the West Bank, or in other words, full annexation, period. The day before Haskell submitted her bill, Shaked had proposed another bill to impose Israeli law, jurisdiction and administration on regions of the Jordan Valley, the Etzion settlement bloc and the West Bank settlement town of Maale Adumin, including industrial and commercial parks, archaeological sites, the roads and state-owned lands between the settlements in West Bank Area C (under full Israeli control). In other words, the bill recommends “annexation” while avoiding the term. According to Shaked, this political window of opportunity must not be forfeited in light of the “willingness on the part of the United States for such an annexation move, a one-time opportunity that will not be repeated.”

The Joint List's Tibi had been in touch with Blue and White in recent weeks regarding a possible minority government. He believes that the timing of Secretary of State Mike Pompeo’s announcement that the settlements do not violate international law is not coincidental. According to Tibi, President Donald Trump did not hide the fact that he favored Netanyahu in the September elections in Israel. With his friend in Jerusalem still in distress, why not give Netanyahu a little push to help him in the competition for right-wing votes? “This is an election gift from a president undergoing an impeachment inquiry to a prime minister who was toppled,” Tibi said to Al-Monitor.

As soon as Pompeo delivered Trump’s “gift” to Netanyahu, the Joint List issued a statement harshly condemning the announcement, in particular its timing: “The Joint List views this miserable statement — its content as well as its timing — as a direct continuation of the Trump administration’s total and unqualified support of Israel’s extremist right-wing sector under Netanyahu’s leadership. The Trump administration is taking sides with the settlers against all the countries of the world and the international community.”

It is not clear how the present Knesset will vote on the bill for annexing the Jordan Valley, should it ever come to a vote. What is clear is that the issue of the valley's annexation has created a catch-22 for Gantz and the Blue and White. A vote in favor by his alliance will lead it to lose Joint List support after the next elections. There is no chance that members of the Joint List will support a faction that endorses any kind of annexation. If Blue and White begins to vacillate and oppose the bill, then Netanyahu will criticize and ridicule them during the election campaign. Therefore Knesset member Avi Nissenkorn (Blue and White), head of the Knesset's Arrangements Committee, will definitely try to prevent the bill from reaching the stage of a preliminary hearing.

Regardless of whether Nissenkorn succeeds, it seems that annexation of the Jordan Valley is on its way, with the encouragement of the Trump administration.