When will Israeli politicians stop hiding behind masks?

Prime Minister Benjamin Netanyahu is fully aware of the diplomatic and security dangers involved in annexing the Jordan Valley, but these do not deter him from making plenty of empty promises to his voters. 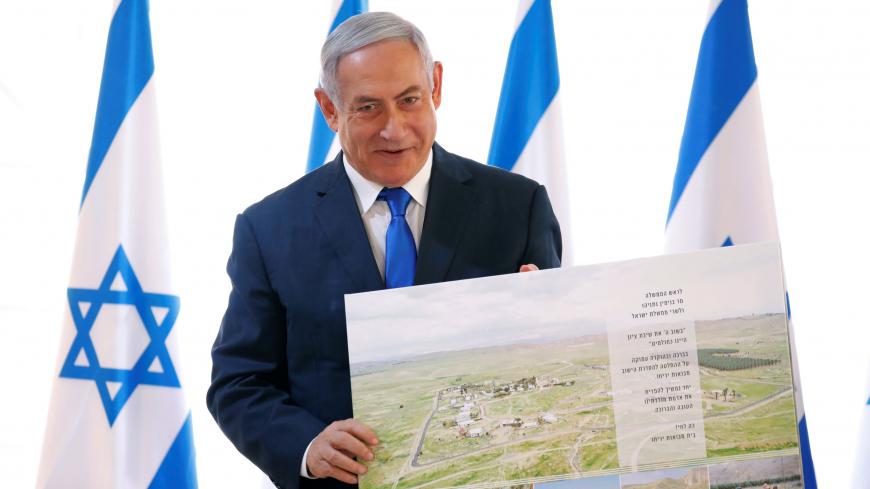 Israeli Prime Minister Benjamin Netanyahu holds up a placard given to him by Israeli residents of the area during a Cabinet meeting in the Jordan Valley, Israeli-occupied West Bank, Sept. 15, 2019. - REUTERS/Amir Cohen

The recent series of short-interval elections taught elected Israeli officials that they need to change their habits. In the past, they would remove their masks immediately after elections in order to try and lead the public down the road they really wanted. Late Prime Minister Menachem Begin made a full retreat from the Sinai Peninsula; late Prime Minister Yitzhak Rabin stated before the 1992 elections that only a madman would withdraw from the Golan Heights, but afterward he informed American Secretary of State Christopher Warren that he was prepared to withdraw fully from the Heights if Israel’s security needs were addressed; and Prime Minister Benjamin Netanyahu swore before the 2009 elections that he would not allow a Palestinian state to be formed, but afterward came his famous Bar Ilan speech. Now, however, Israeli politicians are worried about the chances for another (fourth) round of elections in the near future. They know that another round in such a short interval would immediately reveal the gap between their election promises and their readiness to fulfill those promises.

Due to this awkward state of affairs, a new phenomenon has been created in recent months: Politicians are wearing their masks for longer periods of time than in the past. Thus, we find ourselves in never-ending election cycles in which propaganda and policy are mixed together, making it very difficult to distinguish between the two.

One excellent example of the above is the possibility of annexation of the Jordan Valley. As aforementioned, in 2009 Benjamin Netanyahu joined the “splitting up of Israel” camp, though his reasons were purely demographic. From that point in time and onward, the Jordan Valley was considered territory from which Israel was supposed to retreat if Netanyahu’s conditions for the establishment of a Palestinian state were to be realized. Even in his ultranationalist speeches, Netanyahu talked about the need to remain on the site for 40 years after signing a permanent agreement with the PLO, even though many people in the security establishment felt this to be unnecessary. The prime minister was careful to pick his words and say that the Israel Defense Forces would remain on the Jordan River and not the Jordan Valley. Israel was never able to populate the valley with hordes of settlers, and most of the settlers in the valley are not extremists. Thus, their evacuation would evidently not involve violent confrontations with a crying and screaming population.

Despite all that, Israelis nowadays look differently at the Jordan Valley. In public opinion, it has morphed into the new Western Wall, the bedrock of our very existence — nothing is more urgent than to annex it to Israel. Insiders understand that annexation of the Jordan Valley will not shake the ground more than the American recognition of Israel’s annexation of the Golan Heights. Nothing has changed in the lives of the settlers on the Golan Heights since that American recognition. They are well aware that different rulership in Syria may lead an Israeli government, both right- and left-based governments, to try to renew peace talks with our northeast neighbors. This would end with an Israeli retreat from the Heights and cancellation of the 1981 annexation law.

A special committee has already begun to mark Israel’s new border following the “peace agreement” between the United States and the state of the Jews. The committee includes personages such as Israeli Tourism Minister Yariv Levin and American Ambassador to Israel David Friedman; the latter serves mainly as the settlers’ ambassador in the Israeli government. They created an impression of the “tremendous” historical importance of their acts, and Israel’s prime minister believes in their important, serious work. But even he knows that such an American-Israeli agreement has no real significance. Anyone who would produce a peace agreement with the Palestinians would nullify annexation of the Jordan Valley, just as he’d have to revoke annexation of the Arab neighborhoods in East Jerusalem (including Palestinian refugee camps) that are so close to the hearts of those who view themselves as Israeli patriots.

But the new mask of Netanyahu and the Likud is the annexation of the Jordan Valley. It is part of Netanyahu’s efforts to win over the right-wing settler voice that fools itself by thinking that annexation announcements will make it impossible to partition the country. In February 2017, shortly after being elected leader of the free world, Donald Trump delivered a historic statement in which he said that he could "live with" either a two-state or one-state solution for Israel. In Israel, we all recall the reaction of Yamina leader Naftali Bennett (current defense minister and former education minister), who stated that at last the two-state solution could be relegated to the dustbin. Then, when Trump’s pathetic plan was unfurled, it turned out that it even included the two states. It is hard to believe that any future government in Israel that understands the importance of a bonafide border between the Palestinians and us could come up with a better solution than the two-state view.

Anyone following Netanyahu’s moves ever since he has been the target of suspicion of criminal acts would estimate that this affair is what drives him principally in his choices of words and deeds. Even if he claims to have other interests on his mind, these may well be a mask: from bringing 43 members of the Ethiopian Falash Mura to Israel only days before the elections Feb. 25 to tightening Israeli relations with Sudan. But some of his actions may cause real damage to Israel’s national interests. For example, the annexation of the Jordan Valley can cause real damage to our relations with two Arab countries with whom we have a peace agreement, Egypt and Jordan. It can also damage relations with the Palestinian leadership and the Palestinian Authority, with whom Israel shares strong ties — albeit ties that both sides do not always admit publicly. Such an annexation may compel the Palestinians to weaken ties with Israel or even abolish them.

Netanyahu’s policy regarding annexation also creates problems for Benny Gantz and his Blue and White party. Most of the party’s leadership understands that the Jordan Valley no longer has much security value in 2020, more than 50 years since Yigal Allon publicized his plan. Such a one-sided Israeli annexation, without the agreement of the Palestinians, can inflict much damage on Israel. Yet Blue and White, too, put on their masks, give lip service to the importance of the valley and promise to demand it from the Palestinians during any future negotiations — a demand that has never before been raised at any serious negotiations of a permanent agreement between us and them. This is true on both the formal and informal levels.

Thus, the Likud masquerades as being "righter" than Yamina (the pro-settler religious alliance), and Blue and White disguises itself as the Likud. Somehow, the ill-conceived notion of annexing a third of the West Bank morphed into a reasonable claim to Gantz, who identified with Trump’s plan even before he managed to read it. He even suggested bringing the plan to the Knesset as is and asked for the support of lawmakers. None of this brought Gantz even one vote, but it inflicted great harm on the Israeli peace camp, Jew and Arab alike. And that camp is Blue and White’s true base of power, despite Gantz’ denials to the contrary.

What is important now is that the specter of a fourth round of elections should not cause the parties to continue wearing their masks. We must remember that these masks involve diplomatic processes that endanger us all.