Prime Minister Benjamin Netanyahu announced he would annex the Jordan Valley after the elections. He hopes this announcement will sideline unpleasant issues for him, such as the police investigation or a possible Trump-Rouhani meeting. 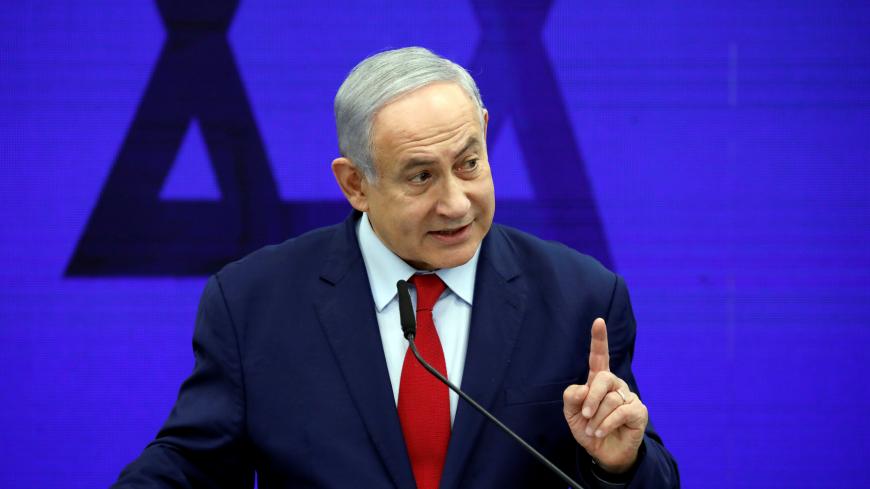 If Prime Minister Benjamin Netanyahu fails to win the elections, Sept. 10. could turn out to be forever seared into the memories of Israelis as a traumatic day.

According to the latest polls, a little less than half of Israelis will be giving their votes on Sept. 17 to one of the so-called “right-wing bloc” parties. For the rest of Israel’s eligible voters, members of the “anyone but Netanyahu” bloc, Sept. 10 could mark the day that Netanyahu and his strategy sank to the depths of the earth.

But what exactly happened on Sept. 10? At 6 p.m., Netanyahu convened the ministers and Knesset members of his Likud party to cheer his “dramatic” declaration that he would impose Israeli sovereignty over the Jordan Valley and the northern part of the Dead Sea. That is, of course, if voters allow him to form a coalition government that will grant him immunity from prosecution on charges of corruption and thwart his “annexation” to Maasiyahu Prison.

Shortly after this fraudulent election propaganda, delivered on live television under the guise of an important announcement to the nation, the headlines blared an announcement of truly significant national importance, reporting that US President Donald Trump had fired national security adviser John Bolton. Along with hearing that Netanyahu’s ideological doppelganger (the hawkish Bolton) had been kicked out of the White House, Israeli voters were informed that the American president was willing to meet unconditionally with his Iranian counterpart, Hassan Rouhani. The news was delivered by Secretary of State Mike Pompeo, who had become in the blink of a tweet the key figure in the US foreign policy arena. Netanyahu’s nightmarish evening was capped with dramatic footage showing “Mr. Security” being whisked off an election rally stage in the southern city of Ashdod by his bodyguards to the strident tones of a siren warning of incoming rockets fired from Gaza.

Netanyahu’s Jordan Valley and Dead Sea declaration was yet another exercise in diverting attention from the defense-diplomacy tsunami threatening to destroy the bedrock of Netanyahu’s political existence. Trump, Netanyahu’s one and only strategic asset in the West, has morphed into an unreliable ally if not an outright strategic burden in front of the eyes of his astonished electorate. Trump had showered Netanyahu with gifts such as the collapse of the nuclear agreement with Iran, the transfer of the US Embassy to Jerusalem, US recognition of Israel’s annexation of the Golan Heights and the burial of peace talks with the Palestinians. But now, he decided to turn his back on this policy of gifts, sending it flying in the air.

All of this is indeed bad news for Netanyahu. Indeed, Israelis recognize Netanyahu’s contribution to advancing the status of Jerusalem and the Golan, and to the recycled pledge to annex the Jordan Valley. Still, his main claim for fame is his heroic (in his point of view) battle against the Iranian nuke. Hundreds of giant photos showing Netanyahu shaking hands with Trump have been plastered on walls and at intersections around the country, proof of his foreign policy prowess.

The gamble on Trump has placed Netanyahu in an untenable bind. How can he say a bad word about the man he has extolled as “Israel’s greatest friend”? At most, the prime minister allowed himself an anemic tweet against the conciliatory signals that Trump is sending Tehran. Harsher words of the kind he reserved for former US President Barack Obama at the time and which now serve Netanyahu to rail against the leading sponsor of the American-Iranian rapprochement, French President Emmanuel Macron, would turn the Netanyahu-Trump billboards into a caricature.

Netanyahu’s declaration of his intention to annex the Jordan Valley is blatant election campaign propaganda, mostly reflecting feelings of hysteria in the prime minister’s residence. It is designed to divert attention from a possible abandonment by Trump the gift-giver — the American goose who laid golden eggs of great political value for Netanyahu. These diplomatic gifts were even more valuable to Netanyahu than other gifts, such as the cigars and champagne supplied by his associate Arnon Milchan to the besieged Netanyahu family engaged in a heroic war against the media.

How many floating voters — undecided whether to vote for the center-left bloc or the right-wing parties — will be swayed to the right by Netanyahu’s pledge to impose Israeli sovereignty over the Jordan Valley and the Dead Sea? The best Netanyahu can hope for is that his promise will convince a few right-wing supporters to vote Likud instead of voting for one of the far-right religious parties, Rightward or Otzma Yehudit (Jewish Power). In any case, his move is unlikely to advance the Likud even close to the slim 61-seat majority of Knesset seats it needs to win the Sept. 17 elections (taking into consideration that it won’t get the support of Netanyahu’s nemesis, Yisrael Beitenu Chairman Avigdor Liberman).

Lest we forget, in recent years, Netanyahu actually blocked several initiatives by Likud lawmakers to annex the Jordan Valley. Not only that, but on July 31, his great rival Benny Gantz, head of the Blue and White party, declared during a widely publicized visit of the party leadership to the Jordan Valley that under any future agreements, the area “will always remain under our control,” describing it as “of vast strategic importance.” Judging by the polls, this promise did not offer enough votes for Blue and White. As previously reported here, a 2011 report by former top military and defense experts of the Peace and Security Association warned that settlers and their supporters repeatedly scare Israelis with doomsday scenarios defying all logic regarding the rationale for holding on to the Jordan Valley, cynically exploiting Israelis’ fears for sectarian political goals.

To his regret, the footage of Netanyahu being whisked away from the stage in Ashdod became viral. This looped video clip showing the leader of a nuclear power (according to foreign reports) disrupting his own election rally in Ashdod — Israel’s sixth-largest city — against the backdrop of a missile-warning siren ridiculed Netanyahu more than any hysterical pre-election declaration. One photo showing Netanyahu being spirited away for fear of rockets fired by a little terrorist from Gaza at the towns of Ashdod and Ashkelon dwarfed all the photo-ops showing Netanyahu embracing foreign leaders who, like him, dress up as democrats. However, as former army spokeswoman and current Israeli Culture Minister Miri Regev said in March after one of the previous rocket attacks, “So what, they fired on Ashkelon? They fired on Ashkelon and we fired back at them.”

In the same vein, one could ask: So what if Netanyahu bet all his chips on a capricious president (Trump) who would save Israel from the “Iranian threat” and now threatens to change his stripes? So what if Netanyahu once said he supports the two-state solution and today he is promising to annex one-third of the territory (the West Bank) destined for the second state (Palestine) and destroying all prospects of peace? So what if — in order to save his skin — the prime minister of Israel is willing to crush the foundations of Israeli democracy?

Israelis will answer all these questions next Tuesday, Sept. 17. And perhaps Trump will once again surprise everyone and pull a lifeline out of his sleeve to save Netanyahu from sinking into the Dead Sea — the lowest place on earth.